Are you stocking up on food and necessities just in case Coronavirus hits Australia at emergency levels?

A question for the men on here. 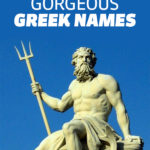 Australia is home to one of the largest Greek communities in the world, so many families in Australia have Greek cultural or ancestral connections.

If your family is one of these, or you just love Greek people, Greek culture, or Greece as a place, you might be thinking about a Greek name for your bundle of joy. We have a few suggestions for you, on both sides of the gender line.

Let’s start with the girls!

This is a bright name that means “happiness, joy” in Greek.

A variant on a similarly spelled name meaning “mistress, lady” in Greek.

A version of Helen, which means “torch”.

A modern Greek form of Joanna, which traces its roots back to John.

This name means “most beautiful” in Greek.

An extension of the name Mel, which probably links to the Greek word for “honey”.

Female version of Olympos, which is the name for the mountain home of the Greek gods.

This name means “moon” in Greek, and is sometimes linked with the goddess Artemis.

A relatively common name, this is a Greek name as well meaning “wisdom”.

This name comes from the Greek word for “yellow” or “fair hair”.

While also a common name, this actually means “life” in Greek.

If you loved the girl names, wait until you hear these.

Greek version of Angelus, which means “messenger” and derives from the heavenly creature.

Comes from the Ancient Greek name Arkadios, which means “of Arcadia”.

Comes from the Greek word charis, which means “grace, kindness”.

Variant on the name Demetrius, which comes from the Greek goddess Demeter.

Shortened form of Dionysios and other Greek names starting with dios, this means “of Zeus”.

An Ancient Greek name that comes from the name Heron, which also means “hero”.

Greek form of the name Cyrus, which might mean “young”, “far sighted” or “lord”.

Comes from the Greek word for “lion”, this name was made famous by a Spartan king.

Greek form of Marcus, which might be related to the Roman god Mars.

A variant of Nicholas, which means “victory of the people”.

Comes from a Greek word meaning “to honour, to esteem”.

Derived from the name of the Greek father god Zeus.

If you want to embrace the rich Greek history, there are an enormous number of mythical Greek names that you might choose to bestow on your children.

God of music, arts, knowledge, healing, plague, prophecy, poetry, manly beauty and archery. In Greek mythology, he is not the God of the sun.

A Titan forced to carry the heavens on his shoulders as a punishment from Zeus.

One of the fresh water nymphs, the name means “to cover” or “to hide”.

One of the sea deities and leader of the dolphins, he was made a constellation by Poseidon.

One of the Pleiades, Electra means “shining”, “amber”, and “bright”.

The goddess of harmony and concord.

The messenger of the gods, Hermes is also the God of boundaries, travel, communication, trade, language, and writing.

The goddess of night.

One of the divine twins, Pollux asked Zues to share his immortality when his twin Castor was killed.