Peter lived in Kisilova, Serbia until his death. Immediately after his death, those villagers who he had visited and strangled started dying of short illness. The villagers decided to exhume his body in fear for their lives. His body had not changed. Hair and nails had grown long. Curiously, there was blood in his mouth. Villagers drove a stake through him causing blood flow from his mouth and ears. This marked his gruesome end. This suspected vampire was burnt to death in 1573 for lycanthropy and witchcraft. During his trial, he told the court how he was lured by a spectre who gave him an ointment that would turn him into a wolf for easier hunting. He confessed to murdering and eating at least four children. More than fifty witnesses claimed to have seen him attacking children. 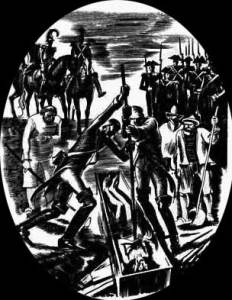 Paole was a newcomer of Meduegna and he occasionally told tales of how he encountered a vampire and avoided turning into one by smearing himself with vampire blood and eating soil from his grave. Unfortunately, in 1725, he broke his neck and died. After his death, those he visited died from short but painful illnesses. Villagers were advised to exhume the body to prevent more deaths. The body had not changed and blood was flowing from the mouth, eyes and ears. They drove a stake causing huge blood flow and then burnt the body. Theiss was accused of being a werewolf in 1692. Just like others in this list, he confessed to be a wolf but his story was quit different. He was transformed into a wolf on St. Lucia’s Day to fight the wizards and witches of Satan. During his trial, the judge could not make Thiess confess to having a pact with the devil but upheld that his story encouraged townsfolk to live a non-Christian life. It was for this reason that he was excommunicated from the community. There are at least fifteen thousand people living as vampires in the United Kingdom. They are part of a subculture that feeds on blood or energy of other humans. This subculture can not be immediately declared dangerous or mad. Research is underway to explain their nature of existence.

What do you want to know about real life vampires?