Has anyone NEVER been away from their children?
Answered 46 minutes ago
Mums that work but have toddlers? HELP!
Answered 2 hours ago
Separation
Answered 3 hours ago
What does owls in a raincoat mean?
Asked 3 hours ago

To pedal their products, these advertisements invoke some of the worst gender stereotypes, depicting women as terrible drivers, brainless beauties, and kitchen-dwellers.

These amazing vintage advertisements serve up casual sexism by the truckload.

There must have been Mad Men behind them, check out these horrendously sexist vintage ads we found:

Yep. Even with those weakling bingo wing arms. Who cares about the oven? Where can I get one of those sweet-as skirts? It could double as a duvet. If you had bought new sauce pans, Jean would have *probably* whacked you with one. So yah, good move. Spanking? Well. It CAN be a yes. But you should always ask first. 😉 I hope all the food that comes out of tastes as bad as it looks. What is it with 60s food styling? 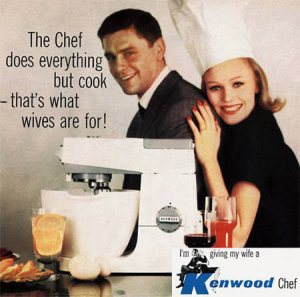 *Actually* she’ll be happier with diamonds. or cake. Just Saying. Gentlemen, don’t make her buy the pants. That’s how they measure your coffin. Look at how excited she is thinking of all the empty jars she can fit your body parts in without the police figuring out. It’s comments like these that cause involuntary shudders. I. Can’t. Even. Could you imagine what the reaction would be if any of these advertisements were put up today? 36 Motivational Desktop Wallpapers to Help You Get Sh*t Done

And they're totally gorgeous, too

25 Hilarious Job Ads That Are Too Funny Not To Share

Would you dare to apply?

WTF??? Mutts that are like looking in the mirror!