Us blokes thought our partners were catching up for coffee to discuss MAFS and The Bachelor.

At the gym we assumed they were discussing Mario’s pecs, Marty’s lats and Phil’s abs, and we were certain they used the train trip to work to discuss 50 Shades of Grey with their bestie.

However, I have it on good authority that instead, our partners are workshopping new ways of convincing us guys to start (or to expand) our families.

Well ladies I’m here to help. You can go back to perving on blokes at the gym because I’ve listed below every strategy you could possibly need to convince us strapping young men to err, have sex without protection – gee, I’m sold on the idea already, how hard can this be?

1. Appeal to his competitive nature

For a man, the term “Keeping up with Jones'” is a load of bull. Every man would rather beat Mr. Jones than try to keep up with him as no man likes to lose to another man, period. It could be an arm wrestle, a cheeseburger eating contest, or a discussion about whether or not a Rekordelig is a girls’ drink.

The man simply must win any competition over his mates and there is no excuse for coming second. It’s a go hard or go home situation”¦ though he best check with his partner whether that’s the best approach for the bedroom.

To use this strategy ladies, I suggest a couple of subtle comments along the lines of “Did you know Johnno and Jenna are trying for a baby? Johnno’s all excited because he’ll be the first of all you blokes to have kids”¦ and he plans to taunt you about it for the rest of your life”.

If your man’s not one to understand the subtleties of such comments, try the direct approach “How about it knackers, let’s show these mates of yours just how effective you are in the sack and be the first to have a kid”. And, if he’s ultra-competitive with his sibling, give this one a go: “Let’s beat your sister and cousins and bring along the first grandchild”.

Sometimes you just need to speak his language. The typical Aussie bloke won’t notice a three inch splinter sticking into his heel (we’re that tough) so it’s unrealistic to expect us to be aware of a virtual ticking clock. The only clock we’re worried about is the one that signals the end of happy hour. For this reason the lady has to go in hard, be straight to the point, and deliver this one right between the eyes. Try this approach “Enough is enough Dazza, I’m going to shack up with your best mate and start a family with him if you don’t get your act into gear. My body and I can’t wait any longer!”

Have the following salient points on hand if you need to address a quick comeback – “The quicker we have kids, the quicker they’re outta the house and the earlier we can retire/travel/relax”.

Us guys like sport, beer and action in the bedroom. These things are very important to us, and just as important is ensuring that our kids support our own footy teams.

As a man, this is my least favourite strategy, however it can be very effective if delivered correctly (sorry to all my dad-to-be brothers out there). It’s as simple as telling your man that the only bedroom action he sees will be when you’re trying to conceive.

Do be careful invoking this strategy. When the man finally agrees he will expect to make up for lost time in the cot and he will apply himself whole-heartedly, 200%, to the exercise of conceiving.

The typical man has two past times, watching footy, and drinking beer whilst watching footy. It’s a well-known fact within the secret circle of blokes that having your child support your partner’s football team is bordering on shameful. In the same category is having your son or daughter named after a character from Home & Away or Neighbours. That’s why this approach is a win-win. You simply sign-away baby naming rights and/or concede on bub’s choice of football team. Unfortunately this could result in a lot of Hawthorn supporters called Buddy, or Parramatta supporters called Fuifui.

Give this a go if your man is just too damn stubborn, or if you’re simply the scheming type who likes to step things up a notch. The concept is easy but you’ll need help from an equally effective schemer for this one to work. The bloke will more likely be interested in starting a family if his best mate is going down the same path. Not only does this play to his competitive nature but it’s an easy sell.  Here are your selling points:

Now this will take some nous to implement as your man’s best mate won’t be interested in tricking his buddy. Here are your options: 6. Preparation for the future

As us blokes get older, our group of mates start to turn soft and fewer and fewer of us want to go out and share a few frothies. This means fewer designated drivers and fewer opportunities to make it to the pub. You need to convince your man to plan for the future, ensure you have designated drivers or drinking partners whilst he’s still ‘drink-fit’, and have kids as early as possible. Remember, the earlier you have kids, the quicker they have their own parties that you can crash.

We would love to know whether you’ve employed any of these strategies in the past, strategies of your own, and just how effective they were. 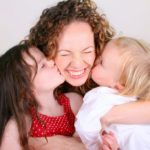 Want To Look Younger? Have… I Lived On Only $25/Week Because I Yesterday I was standing next to a GINORMOUSLY pregnant young lady I remember a time in my life when every waking hour