6. The first of the breed The genealogy of this dog can be trace to Old Hemp  who lived from 1893 to 1901. This pooch began herding sheep when he was still 6 weeks old.His ability and temperament inspired the creation of the border collie breed. 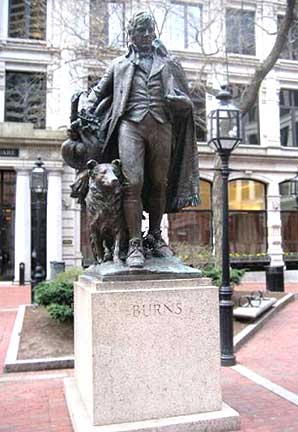 A Scottish poet Robert Burns was a lover of border collies, describing them as honest and loyal. As a young boy, Burns and his brother had a border collie named Luath, who died tragically.  “The Twa Dogs” is an ode to Luath, and a effigy of the poet in Boston’s Winthrop Square with Luath standing eternally by his master’s side.

8. He Works Hard for the Money.

Bred for farming, the Border Collie can add the “best sheep herding dog in the world” feather to his cap. This dog is known for loving hard work, and is extremely high-spirited. If a border collie doesn’t have sheep to herd,  his great drive to fulfil this need will force him to willingly herd people, children, other pets and whatever he feels needs to be mustered! Watch out you little crook! Border collies can move quickly in a catlike, crouched manner, thanks to a space between the tops of the shoulder blades, which lets them sneak by staying low to the ground. This technique lets them assemble animals with extreme rigour. It keeps them physically and mentally happy. Some border collies that work herding sheep have been known to run 50 miles in one day. They could run all day and never get tired.

If not  adequately exercised he may manifest his boredom by chewing up almost everything. The medical profession has noted that cuddling dogs can significantly help improve a person’s well-being. Border Collies are one the few breeds who lend a consoling paw.

The Border Collie continues to reign since time and beginning in every herding farm, dog competition and show arenas, and has always been a favourite friend of man.

10 Epic Christmas Gifts for Your Dog

Your Furbaby deserves a Christmas Present Too!

This Is The Best Way To Bathe Your Pet