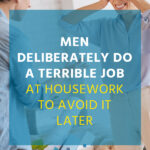 Have you ever wondered how your man could be that bad at doing housework? Well, everything may not be as it seems!!!

It turns out that men are as lazy as we think they are, with a study showing they actually do a terrible job on chores so that they can avoid them later on.

A bathroom retailer has released the shocking study that shows almost a third of men admitted to deliberately botching household chores so their partner would not ask them to do them again in the future.

Victoria Plumb, the retailer, questioned 2,000 men about their domestic cleaning habits and found that while 34% of the men said they didn’t really try that hard on chores, particularly the ones they didn’t like, a massive 30% admitted that they deliberately mess up chores in the hope that their partner will stop asking them to help.

A spokesperson for the company had this to say:

“Most guys will admit they don’t always pull their weight when it comes to the cleaning, but it’s worrying to see so many purposely do a bad job. “Hardly anyone enjoys cleaning, especially the most hated chores like cleaning the bathroom, and it’s likely your partner wants to avoid having to do it as much as you do.”

What’s even more amazing is that the guys who purposefully fail at cleaning get away with it more often than you’d think. Apparently, their partners aren’t catching on to the scene, because 25% of the men said they never get asked to do jobs anymore, and 64% are only occasionally asked to help. It’s not exactly fair and even in these households, that’s for sure.

The study ranked the chores that men love to hate, and it’s no surprise that some of them are ones that ladies aren’t that keen on either. Cleaning the bathroom, toilet and shower all made the top three, followed by doing the washing up, loading/unloading the dishwasher, hanging clothes out to dry, doing ironing, making the bed, washing clothes and vacuuming. Wait… Isn’t that basically everything?

The lazy bones also provided some hints on how they get out of doing chores, which included things likely to annoy any female partner such as leaving smears on windows and glass, spraying cleaner in bathrooms and leaving it to ‘soak’, not washing the dishes properly and more. Unbelievable. In any case, it’s pretty obvious that, overall, men have a lot of slack to pick up when it comes to household chores. Seriously, in the average household, women spend a massive 3 hours and 37 minutes on general cleaning and chores, compared to just 2 hours and 31 minutes in men. And there’s no doubt that in some households, the discrepancy is much higher.

Particularly, when lazy men are involved, and when women have no faith. After all, the same study showed that two-thirds of women don’t trust their partner to do household chores. Although after reading this article, we wouldn’t be surprised if a few lazy men get put in their places!

Victoria Plumb warns men that, although it might seem like a clever idea to shirk the chores or botch them in the hope that you won’t have to do them again, it’s a risky game.

‘Your partner could see right through your plans and end up asking you to help out more often as a punishment.

‘The easiest solution is to share the chores, without doing a bad job of them, so that everyone is happy.’

We agree! So get out there guys, armed with vacuums, mops and sponges, and show these ladies what you can do! 5 Tips For Cooking With Toddlers

A little something something to help you around the house!