It’s a game of strategy by rolling 5 dice to come up with a specific combinations.

“The object of the game is to score points by rolling five dice to make certain combinations. The dice can be rolled up to three times in a turn to try to make various scoring combinations. A game consists of thirteen rounds. After each round the player chooses which scoring category is to be used for that round. Once a category has been used in the game, it cannot be used again. The scoring categories have varying point values, some of which are fixed values and others where the score depends on the value of the dice. A Yahtzee is five-of-a-kind and scores 50 points; the highest of any category. The winner is the player who scores the most points.” The Cards Against Humanity website provides the rules of the game:

” To start the game, each player draws ten White Cards.

The person who most recently pooped begins as the Card Czar and plays a Black Card. The Card Czar reads the question or fill-in-the-blank phrase on the Black Card out loud.

Everyone else answers the question or fills in the blank by passing one White Card, face down, to the Card Czar.

The Card Czar shuffles all of the answers and shares each card combination with the group. For full effect, the Card Czar should usually re-read the Black Card before presenting each answer. The Card Czar then picks the funniest play, and whoever submitted it gets one Awesome Point.

After the round, a new player becomes the Card Czar, and everyone draws back up to ten White Cards. ” 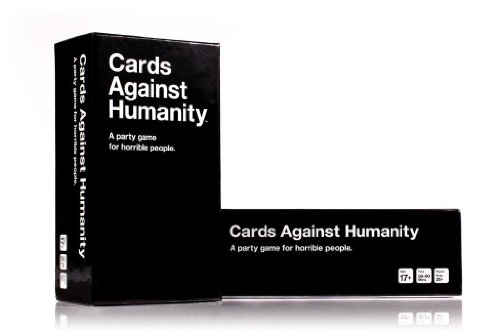 It’s a classic but still addictive games for all ages. It’s a game of laying out your dominos to create matching combinations to score a great points and be the first one to hand over your tiles.