Are you curious about England’s Garden of Death?

The phrase ‘English gardens’ probably conjures up images of pebble paths leading through lush green foliage, ornamental shrubs, delicate flowers, quirky topiary and maybe a hedged maze or two. But in one quintessential English garden, located on the north-east coast of England, they’ve taken their gardens to a whole new level.

In The Alnwick Garden, nestled between a picturesque water feature and a children’s art and craft cottage, grows ‘a fascinating glimpse into the dark side of nature’: The Poison Garden. The creator, Jane Percy, the Duchess of Northumberland, wanted to create something different but also educational.

At first she considered an apothecary-style garden, full of healing and life-preserving plants, but then had a more macabre idea: “I felt that most children I knew would be more interested in hearing how a plant killed, how long it would take you to die if you ate it and how gruesome and painful the death might be.” And with that, the idea of The Poison Garden was born.

Not for the fainthearted, this popular section of The Alnwick Garden is so dangerous that the plants grow behind locked iron gates emblazoned with a white skull and crossbones and a no-nonsense warning: ‘These Plants Can Kill’.

Beyond the gate, visitors must walk through a dark, ivy-covered tunnel that leads to the deadly garden.

Once inside, visitors are strictly prohibited from touching, tasting and even smelling the plants. Surprisingly, children are permitted to walk through the garden but must be under constant adult supervision.

Around 100 different noxious plants are featured in the garden, and there are a few surprises hidden in each flame-shaped garden bed. Plants of all shapes and sizes can be found in The Poison Garden, with beautiful, enticing flowers of every shape and colour. Many of the plants are exotic and unknown, but there are also varieties that are so common that many people have them growing in their own gardens at home. Among the most lethal plants growing in the garden are some commonly found in Australia: the strychnine tree, a plant that can cause paralysis and death if you come into contact with the bark, flowers or fruit, and deadly nightshade (Atropa belladonna), whose leaves and berries can cause hallucinations, coma and death.

Hemlock (Conium maculatum) is a common Australian weed grown in the garden, and can cause paralysis, organ failure and, you guessed it, death if any part of the plant is ingested.

The medicinal castor oil plant (Ricin communis) and the laurel tree (Prunus laurocerasus) are also grown here, with the small seeds of both trees being so dangerous that eating just a handful can cause death within hours. Beware: not all of the plants in the garden need to be ingested to be dangerous, so don’t be tempted to smell the beautiful angel’s trumpet (Brugmansia suaveolens) or devil’s trumpet (Datura spp.) flowers, which are hallucinogenic and could be toxic. Other infamous, lethal plants grown in the garden include henbane (Hyoscyamus nige), monkshood (Aconitum ferox), foxglove (Digitalis spp), mandrake (Mandragora officinarum) and rhubarb (Rheum rhabarbarum), all of which can poison and kill in various gruesome ways.

Some other plants featured in the garden aren’t as deadly, but still have major physiological and psychological effects on anyone who encounters them. In the ‘drug education’ section are well-known and oft-used plants like cannabis, tobacco, magic mushrooms, khat, coca and opium poppies. Not surprisingly, these plants can be quite popular with some visitors and the gardeners have keep many of them  behind cages to prevent any curious visitors from taking a souvenir home.

Before the gates are unlocked, visitors are warned that they enter at their own risk.

While the most dangerous plants are grown in cages to prevent anyone accidentally (or even deliberately) touching the plants, some of the plants are so toxic that even the fumes can cause guests to faint during the tour. Even so, thousands flock to the frightening gardens every week and risk their lives to walk through the most dangerous garden in the world.

Would you dare to walk through this garden of death? 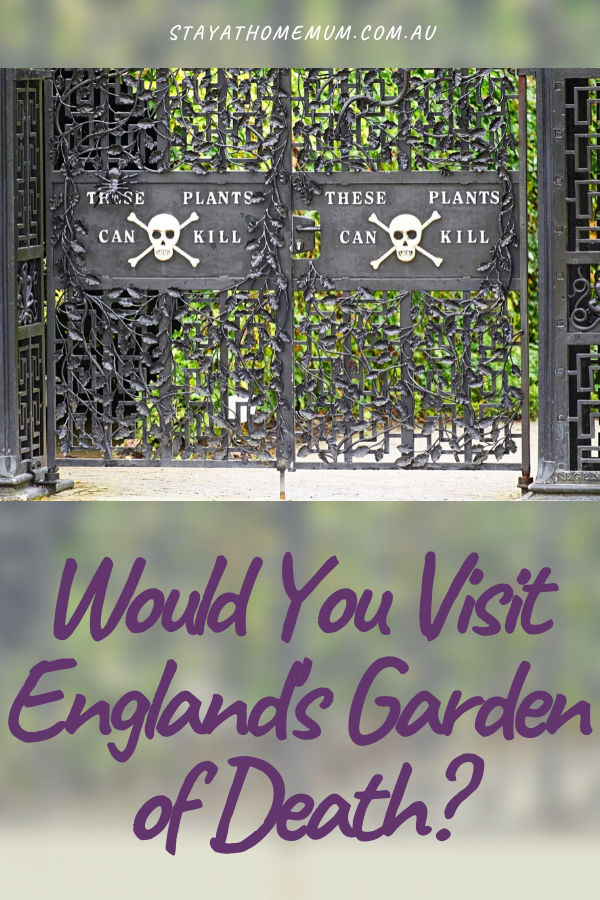