How many ladies have had double penetration and did they enjoy or hate it.
Asked 6 hours ago
My partner bought me a gift - after I specifically said to him: "Thank you for the idea, but I do not want this." Now he
Answered 11 hours ago
Were you pleased with the sex of your firstborn?
Answered 11 hours ago
2 homes
Asked 12 hours ago 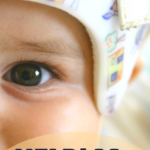 Most new mums freak out at the sight of this that some might have asked themselves, “Was it my fault?”

Well, the good news is, Mum, it’s not your fault, so you can calm down now.

We know how soft newborn babies’ heads are. They tend to get deformed easily which often results to babies having a flat head syndrome or in more scientific terms, plagiocephaly.

But while it sounds alarming, it’s usually harmless and won’t cause long-term effects on your bub’s skull, and once bub starts to learn to sit, plagiocephaly often disappears on its own within months.

More common in babies, plagiocephaly is a condition characterised by an asymmetrical distortion or flattening of one side of the skull. This happens when a baby is lying flat on his/her back for too long.

The most common type of plagiocephaly, positional plagiocephaly, develops when a baby’s head is turned to either the left or right side. Staying on one side for a longer time creates a gentle pressure on the baby’s head, resulting to an asymmetrical shape.

When your bub is sleeping face up towards the ceiling, the skull flattens at the back of the head. This is referred to as brachycephaly. “Really, the only difference between positional plagiocephaly and brachycephaly is where the flattening occurs, based on how the baby lies,” Cunningham says.

Though not that common, but is more serious than the other types, scaphocephaly occurs as a result of a birth defect such as when the joints between the bones of the baby’s skull close up prematurely and prevent normal growth.

Cunningham explains that the top of the human skull is made up of five bones, and in between the bones, there’s a soft tissue that is rubbery and expands when the brain grows. However, in scaphocephaly, the bone grows across the soft tissue, which fuses two bones and restricting the growth of the skull. “The head gets very narrow because it can’t expand from side to side,” he says.

Scaphocephaly is the most common type of craniosynostosis, a condition in which one or more of the fibrous sutures in an infant skull prematurely fuses by turning into bone, thereby changing the growth pattern of the skull. As we have mentioned earlier, sleeping in one position for a long time can result to plagiocephaly among babies, which is why it is encouraged to make babies sleep in different positions.

In 1994, the American Academy of Pediatrics launched the Back to Sleep campaign to urge parents to practice back-sleeping among their babies. But while this simple move reduced the rate of Sudden Infant Death Syndrome by over 50 percent, it drastically increased the number of cases of flat head syndrome.

“The nature of back-sleeping has the baby lying in a more static position than stomach-sleeping,” Cunningham says. “So these infants are at a greater risk of developing flattening.”

2. Placing the baby longer in swings, bouncers and car seats.

Cunningham reiterates that “Anything that makes the baby’s head flop to one side isn’t good.” This means that aside from sleeping, babies can also develop plagiocephaly if he/she is placed in swings, bouncers and car seats for a much longer period of time. This is why inputting bub in car seats, infant inserts are important to keep your newborn’s head in a neutral position.

3. Prematurity and in multiples

Premature babies have a slightly softer skull than babies born in full-term. Multiples have also the tendency to acquire plagiocephaly, since in-utero, they are already crowded, which means their skulls are pressed up against each other, Cunningham explains.

More commonly called wryneck or “twisted neck,” torticollis occurs when a baby’s neck muscles force him/her to turn to one side. due to an injury at the time of birth, or that a baby just wants to favour one head position than the other which limits the development of the other muscles.

“Because they always hold their neck in that way, one muscle doesn’t get as long, so they induce torticollis,” Cunningham says. “I refer to it as secondary torticollis because babies don’t start out with any kind of problem—they cause it by always sleeping in one position and reducing their range of motion.”

How to identify if your baby has plagiocephaly

A normal infant’s skull is perfectly round in the back and asymmetrical on the left and right sides. But if your baby has plagiocephaly, the flattened spot has a noticeable lesser amount of hair. While doctors can easily detect this during routine check-ups, you as a parent can help distinguish it as well. “Anytime a parent notices that the back of the skull is looking asymmetric, they should bring it up with their doctor,” Cunningham says.

How to treat or prevent it

There are ways to treat plagiocephaly such as:

If the baby has asymmetric neck muscles, doctors may recommend physical therapy or some exercises you can do at home to strengthen the muscles and improve his/her range of motion.

For more serious cases, doctors may recommend cranial orthotic therapy which makes use of a baby helmet that looks like a mini-skateboard helmet.

Cunningham explains: “It’s like growing an apple in a bottle. As baby’s brain grows and pushes out against the skull, the pressure of the helmet helps force the bones, and therefore baby’s head, to grow into the more normal shape the helmet provides.”

The treatment usually starts between 4 and 6 months.

While mums usually want to do this trick to keep their baby in place, the National Institutes of Health advises against it as this can be a SIDS risk.

Through repositional therapy, you can try to prevent your baby from lying on the flattened spot all the time by turning his/her head the other way when sleeping or put him/her on his/her belly. Or better yet, spend some tummy time with him/her. You can even take advantage of this position to bond with your bub.

However, never place them to sleep on their belly to avoid a SIDS risk.

5. Hold them often and in an upright position.

Carry them often and hold them in an upright position so they don’t stay or lie too long in their crib, infant seat or swing. This lessens the presure of those things on their head. And you can also bond with them too.

6. Change the surroundings of your baby’s sleeping area occasionally.

Rearranging your baby’s sleeping area, such as relocating their mobiles or other sources of visual stimulation can help get your baby interested in his/her area, which means there’s more eye and muscle development, keeping your baby from regularly looking in the same direction, thus, less time lying and staying at the same spot for a long time.

7. When feeding, don’t let your baby stay on one side.

Switch arms or change his/her position each time you feed your baby. While this keeps pressure from building on one side, it also helps in the equal visual development of both eyes as each eye will take turns in seeing the view of the surroundings (more common in breastfeeding babies). The Ones That Missed The Mark