Most women know the birth control method of tubal ligation as “getting your tubes tied.”

It’s a surgical birth control method where a female’s Fallopian tubes are tied into a knot so as to prevent an egg from traveling into the Fallopian tubes for fertilisation. The tubes can also be cut or blocked by another method in a tubal ligation.

Tubal ligation or tubal sterilization is regarded as a permanent procedure, so it’s not something that you should get if you ever hope to have children in the future. Because of that, it’s usually requested by women in their 30s and 40s. It’s actually possible to reverse a tubal ligation, but the majority of the time, the woman will still be unable to become pregnant.

Some fun statistics on Tubal Ligation Include:

How the Tubal Ligation Procedure is Done

The procedure is done by a surgeon or a Gynecologist, and involves making a tiny incision in the abdomen so that the tools can reach the Fallopian tubes. It can be painful for some women, though many don’t claim to have much pain. It really depends on the individual and the method used. Some surgeons will burn the Fallopian tubes shut, which actually hurts less than having them cut.

Sometimes a tubal ligation can be done straight away after giving birth (they make a tiny incision under the belly button), or it can be done during a c-section.

Most of the time, the patient will require a general anesthetic however it has been known to be be done as an outpatient using a great big needle (eek).

The procedure includes inflating the abdomen with gas (so they can see what they are doing), and then locates the Fallopian tubes and either cuts them and then burns each of the ends, or just chops the fallopian tubes out altogether, or applies ‘clamps’ over each tube which remain in place.

Recovering After the Tubal Ligation

Unless there are any complications, you can leave the hospital the same day as your tubal ligation. Some of the after effects include a light vaginal bleeding, as well as possible swelling in your stomach if you went for a laparoscopy. A laparoscopy is one of the less painful methods of tubal ligation, but it uses a gas to pull the muscles off the organs in your abdomen to give the surgeon more room to work with. This gas is what causes the temporary swelling, which usually only lasts for about a day before it’s absorbed by your body.

Usually, you’ll be allowed to shower at least 24 hours after the surgery takes place, but you should resist the temptation to rub or pull on your incision for seven days at least. Sex is possible pretty much immediately, but it may be painful for up to a week after you have the procedure done. Finally, try to schedule at least one day of rest before you have to go back to work or do anything strenuous. This will help the incision heal faster. Try not to exercise for at least a week.

Side effects after surgery can include:

There is also a rare side effect called ‘Post Tubal Syndrome’ which causes abnormal bleeding, changes in sexual behavior and increased premenstrual stress.

How effective is Tubal Ligation?

Tubal ligation is not, surprisingly, 100% effective. There’s still a very small risk of pregnancy but after a year, at least five women out of 1,000 will get pregnant again. After a period of five years, that goes up to approximately 13 women out of 1,000. Sometimes, the tubes will grow back together, or your body may actually create a new passage to let the egg through. Nature finds a way.

As far as complications go, tubal ligation is generally very safe. A minor complication is infection which should be treated immediately. Major complications would be blood loss or an incision that is too small for the operation, preventing it from being done. The surgeon would have to wait for the incision to heal and then make a larger one. This rarely happens though.

What About Tubal Ligation Reversal?

Tubal Ligation is considered permanent, however, there is a procedure called a ‘Tubal Reversal’ that uses microsurgery to re-connect the Fallopian tubes.  However, this is not always possible or successful surgery and is very expensive.

However, women still have the option of doing IVF to bypass the Fallopian tubes if they wish to get pregnant again.

It is Progressively Being Phased Out

With the ease of use of the Mirena, the number of women having tubal ligation procedures is declining.

Will you get your tubes tied? 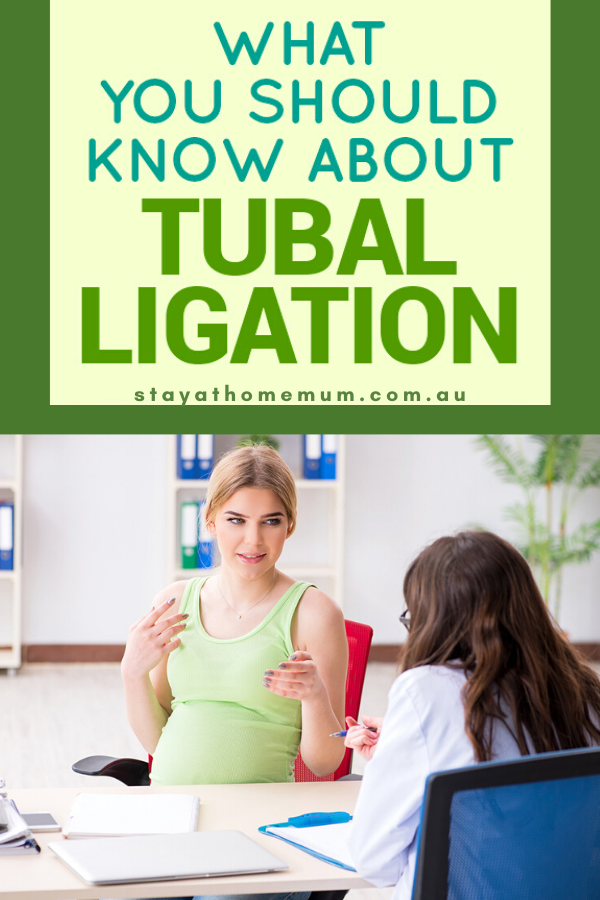 List of Bulk Cleaning Supplies You Can Buy Online

Where to buy bicarb, vinegar and all cleaning supplies for less!