Why do people hate ford cars ?

What lengths have you gone to, to get ahold of some toilet paper, hand sanitiser, nappies or anything else that requires a bucket load of luck for some?

Ok, so supermarkets aren’t offering mainstream home delivery. How are you getting your groceries? How often are you going to the shops?

I kept telling and giving myself every reason to go through with it, even though I did not believe in it, I kept trying to justify it.

The day of my abortion I woke up in a hot sweat, feeling fevered and sick. I vomited in the shower and again before getting in the car. It was the longest car trip of my life, my whole body felt weighted as my heart pounded in irregular beats to my shaky breath.

I felt like I was about to make a horrible, horrible decision.

Once seated in the clinic, I laid a hand on my belly. My stomach was still flat, there was no sign of life — no sign at all. I kept telling myself it was the right decision, that we could not afford to have a baby, my career was just hitting its peak and that my dreams of travelling would be shattered if this baby was born.

The decision had been made, I was to have an abortion and never think of what could have been, who could have been. I had disconnected from my feelings, to me, at that moment, there was no unborn child. It was just a simple procedure and that would be it. 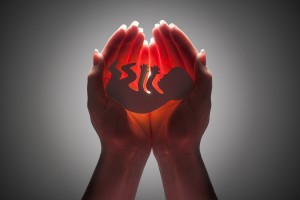 Another five minutes sitting in the waiting room and with my jittering legs refusing to stay still, I walked outside to get some fresh air — but I didn’t just stop for fresh air and instead walked to my car, hoped in and drove home.

I didn’t even think it through — I just drove, I had to get out of there.

Once home, I took another pregnancy test. Still positive. I threw up again before calling the doctor. I told the receptionist it was an emergency and she made an appointment for the following hour.

Even though I didn’t think it at the time, it was the best decision I have ever made.

In the doctor’s office, she made me pee in a cup, determined that yes, I was pregnant and then made me lie down on the bed. She squeezed a clear jelly on my stomach below my belly button and pressed the end of what looked like a microphone hard against my skin.

Out of nowhere, like the swish of the sea, a heartbeat came rushing through the speaker of her machine. “There is your baby’s heartbeat, congratulations,” she said, with a smile.

To say I cried would be an understatement — I sobbed, uncontrollably, in my doctor’s lap — littering a whole box of tissues and unashamedly covering her pants in snot. I then confessed to my appointment at the abortion clinic, that I didn’t feel ready to have a baby or to be a mother, and that all my dreams felt shattered.

She rubbed my back, shushed my cries and told me a story I will never forget.

“When I was 19, I fell pregnant with my son. Like you, I was scared and unsure and also contemplated abortion. But my body had decided it was ready for a baby, so I told myself all you can do is your best,” the doctor said, holding my hand as she continued.

“My son is now a neurosurgeon. Everyday he saves lives and often travels to disadvantaged countries to do so. He is an incredible human-being and we couldn’t be more proud. For me, I went on to finish my degree and become a doctor as I had always wanted — it took a little longer but I got there in the end.

“I often think, what if we never had our son? He couldn’t be doing all these wonderful things and changing lives around the world, and one day, my dear, you will feel the same — believe me.”

I am not sure if it was the sound of my baby’s heartbeat or her little story but from that day on I never thought about abortion, and instead fell in love with my unborn child. I never knew love until I had my son. He is my world and life is perfect in every single way because of him. I am working and have a successful home-based business, my husband and I have planned a trip to Hawaii next year with our son and we are on the way to buying our first house. Life is hard, but damn it’s good.

I understand why people choose an abortion. I almost did myself. But I am so glad I didn’t, because life is worth living — and life would not be the same without my son.

Almost half of all unplanned pregnancies in Australia end in a termination of pregnancy (abortion), and, using what little data is available on abortion rates in Australia, it is estimated that almost one in three Australian women will choose abortion in their lifetime.

Medicare claims each year about 75,700 women chose to have an abortion between 1995-2004. However, it should be noted that the same Medicare item numbers are used to denote procedures which are not terminations, including miscarriage, foetal death, or other gynaecological conditions.

The suction curettage method is the most widely used in Australian clinics. When performed in registered clinics, this method of pregnancy termination is a very safe procedure, with an estimated complication rate of less than two per cent. Medication termination is available in some locations, but providers are still limited.

What is your opinon about abortion?