Have you ever thought about how your kids would respond in an emergency?

If you are a parent of young children, would you trust them to call the right people if something happened while you were home alone?

In what was a scary seven minutes at home for three young siblings, a single mother learnt the answers to those questions. “Is mummy awake?” the operator asked seven-year-old Isabelle McLean.

That was a distressing part of a phone call between an ambulance operator and the young child after her mother Kelly McLean  collapsed and suffered a seizure at her Penrith home on May 20, 2015. The phone call made to 000 by the little girl may have saved her mother’s life and prevented harm coming to her five-year-old sister Mia and two-year-old brother Levi who were home alone with their mother when she passed out.

Isabelle called 000 to bring an ambulance to the house while Mia went to a neighbour’s house to tell an adult. Seven minutes after the call to 000 that another adult arrived to help the two brave girls. “Go next to her and say ‘mummy’ and see if she wakes up,” the ambulance operator continued minutes into the call recorded by NSW Ambulance.

In the recording, Isabelle called out “mummy” before returning to the phone and telling the operator that she would not wake up.

During the call the girls looked after Levi who had become distressed and screaming in the background while trying to communicate with his mum. Close to five minutes after the call was placed, the girls were still checking their mother’s breathing and reporting to the NSW Ambulance operator that “mummy isn’t awake.”

The information little Isabelle provided helped paramedics know the situation before they got there. Queensland Ambulance Service’s Dennis Jess told Bmag the service often receives emergency 000 calls from children. “While the QAS hopes your child will never need to call 000, it is best to prepare them for the worst than be caught off guard in an emergency situation,” he said.

“The QAS has attended many cases where the quick-thinking of a child calling 000 has saved a life.”

Mr Jess said when teaching your child how to call 000, it’s important to explain to them the sorts of questions they’ll need to answer. These are some of the things the operator will ask:

Mr Jess said the location of the emergency is very important; so having it written down near the phone could help. He said it was also mportant to remind children about the danger of making a hoax call.

Mr Jess said children can practice calling 000 with a toy phone or by playing an online training game at kids.triplezero.gov.au/.

Isabelle and Mia, the two brave girls who helped avert a potential tragedy received the Star Award from the NSW Ambulance at a special presentation at their Jamisontown Public School assembly on Tuesday.

Isabelle said her mother, who has a form of epilepsy (although she is unsure whether that was the cause of the May incident), had taught her how to call an ambulance and to say their address. “I’m very proud,” Ms McLean told The Sydney Morning Herald.

“I’m so grateful they knew what do to. I don’t want to think of what could have happened.”

Isabelle said her brother, Levi, 2, was trying to get his mother’s attention during the ordeal, while Mia, 5, ran next door to get help. “He was hugging mum’s belly,” she said.

They both agreed it was a scary experience when asked. But it could have been much scarier if Ms McLean had not taught her children how to respond in an emergency.

So what should you do if something like this happens?

Listen to the call recording: 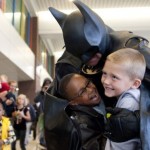