No woman, in one of the darkest hours of her life should be subject to the cruel, heinous and bullying taunts from someone who is trying to impose their extremist beliefs upon her.

“Women have a right to medical privacy and the right to access a legal health service without harassment or intimidation,” health minister Jill Hennessy said.

The upper house in Victoria voted overwhelmingly in favour of the bill to place a ban on protesters harassing people within 150 metres of abortion clinics. In move of compassionate common sense it was passed by 31 votes to eight.

The legislation makes it an offence to block access to footpaths, roads and vehicles within the 150 meter radius of GP clinics, hospitals and any other health services offering abortions. Included in this new law it is also prohibited to film people without consent.

“Abortion clinic or health clinic, there is no real argument against safe access for women.” Van Badham.

A harrowing account from an Australian woman Ruby Hamad, living in New York tells of her experience volunteering at a women’s health clinic in Queens, New York.

“When a local feminist group told me that escorts – volunteers who “escort” patients from the street and into the clinic – were desperately needed at a women’s health centre in a low-income area of Queens, I was motivated as much by curiosity as my passion for reproductive rights.”

They scream things like, “God will punish you! You will go to hell!” They scream things like, “Mommy! Don’t kill me!” Sometimes they add something like, “A pregnancy from a rape is a gift!” They consider it a victory if they terrify a patient enough that she flees to her car. They consider it double the victory if she is crying, because that means repentance. Doesn’t it?

Horrific, extreme and ignorant taunts such as this are hurled at women, daily by crowds of people who believe they are doing the Lords work.

“The hardest thing I’ve ever done is carry a sobbing 14-year-old rape survivor from the door of a women’s health clinic to the door of the van that would take her back to a women’s shelter, while a crowd of men stood around us and screamed that she could never be forgiven.

The hardest question I’ve ever been asked is,

“Why are they doing this to me?”

I don’t know,” says Kate Toal of her experience also volunteering for two years as an escort.

“When you agree to become a clinic escort, you are agreeing to shield someone with your body from people who wish to hurt them.”

The debate around reproductive rights should not be a debate at all. It’s quite clear that we are pro choice, and at no point when that pregnancy test turns positive, should a woman lose her rights to her body and simply become a vessel for procreation and least of all, a statistic to fuel a debate.

Kate says, “These women are not just statistics. They are stronger than the people who think of them as numbers believe them to be. They are more real. They have a right to be there. The path that brought them to this sidewalk with me, whatever that path may be, is tangible. And all I can do is offer to hold their hands.”

Do you think a woman’s choice to exercise her rights is anybody else business? 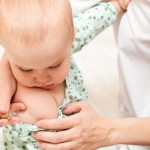 “No Jab No Pay” Immunisation…