Do you have stubborn in laws ? 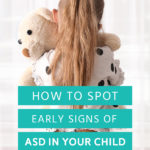 Autism Spectrum Disorder, also known as ASD, is a challenging condition because the children diagnosed with it vary greatly from each other.

Some kids have many ASD characteristics, others have only a few.

When dealing with young children, it can be quite difficult to see the signs of ASD. However, it’s a fact that infants and young children with ASD often develop differently from their non-ASD peers, and ASD that is diagnosed early has more treatment options. With that in mind, we did some research on some of the early warning signs that parents can keep an eye out for. These are sometimes, but not always, indicators that your child might be on the autism spectrum. If your child is displaying one of these signs consistently, or several, it might be time to talk to your doctor about your concern. When autism is diagnosed during infancy, treatment can have much more positive outcomes thanks to the plasticity of the infant brain. Admittedly, it’s difficult to diagnose autism prior to 24 months, and sometimes, symptoms don’t even start until a child is 12-18 months old. However, even at 18 months, intensive treatment can help to rewire a child’s brain so they aren’t so effective.

The early signs of autism in babies generally involve a lack or normal behaviours, which can make them difficult to spot. Indeed for some families, the early signs of autism are actually misinterpreted as the baby being easy to take care of. Babies with autism often seem quiet, independent and undemanding. Here are some of the signs that might suggest an ASD infant or toddler.

As a child grows out of their baby stage and into childhood, the signs and red flags for autism become much more varied. There are a number of areas where kids might exhibit signs that suggest autism, including social difficulties, speech and language difficulties, non-verbal communication difficulties, and behavioural difficulties.

Let’s look at a few ASD signs in these areas now. Children with autism struggle to detect and understand social interaction. Signs of this can show up very early, and as we’ve seen from the signs of autism in babies, things like lacking eye contact and an interest in others, appear even in babies. In older kids, some signs to look for include:

Signs of Speech and Language Difficulties Many children with autism start talking late, and any regression in speaking ability would definitely be looked into. These signs aren’t caught until later because children just aren’t talking. Kids who have ASD find it really difficult to understand the non-verbal ‘cues’ that others give off, such as body language, facial expressions, gestures, movements, vocal tone and so on. Here are some of the signs that indicate your child might struggle with this: Children with autism are often described as being restrictive, inflexible and sometimes obsessive in the way they live their lives, engage in interests, and go about their activities. These are a few things to look out for that are red flags in this instance:

If you feel that your child is regularly displaying one of more of these signs, consider going to see your health practitioner about having an ASD assessment.