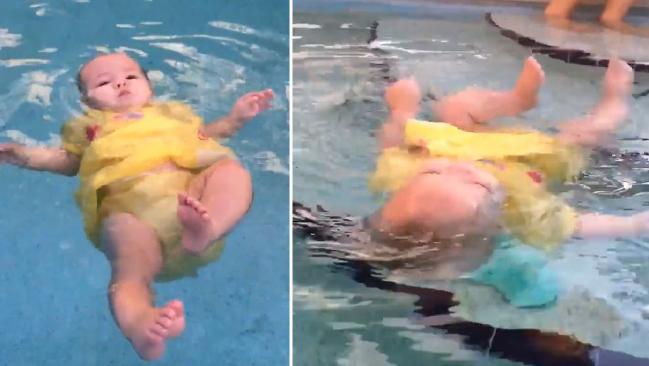 An American mother has been slammed on Facebook after posting a video of her then six-month-old daughter fighting to stay afloat unassisted in the pool.

Despite the backlash, Keri Morrison insists that she is teaching her daughter a valuable skill called ‘self-rescuing’.

After losing her two-year-old son Jake to a drowning accident in 2013, mother Keri Morrison knew for certain she didn’t want her now 13-month-old daughter Josie to go through the same terrifying ordeal. So since the very early days of her babyhood, she has been dedicated to teaching Josie how to swim, with the help of the Infant Swimming Resource (ISR) program.

A video showing Josie’s skills was uploaded to Facebook just a few days ago, where it immediately went viral and was met with a storm of criticism and of support. In the video, the six-month-old baby is lured into the water with a toy. When she falls in face first, she is able to right herself under the water, float up to the surface, and remain there for almost one-and-a-half minutes before being picked up by an adult.

Criticisers of the video called Keri out for being cruel and subjecting her daughter to such an upsetting experience. At the same time, others applauded her for teaching her child to swim so young, and thereby, drastically reducing her chances of being the victim of a drowning accident.

Keri Morrison told Fox News that she was happy to defend herself from critics because she was so passionate about teaching children, and not just her own children, how to swim and protect themselves in an aquatic environment:

“To me, I’m protecting her and that is what a mother is supposed to do protect her. I feel like I failed my son and I’m not going to fail my daughters.”

Morrison also noted in her interview, as she has in many others, that it was the tragic drowning death of her young son that motivated her to become such a public supporter of infant swimming lessons:

“One of the things I really struggle with is that my son fell in the water not knowing what to do. And that thought and vision fire me up to make sure that not just my children but children all over are safe and can do this in the water.”

Little Josie’s swimming teacher Ashleigh Bullivant from the Infant Swimming Resource was also interviewed for the Fox News segment. She expanded on the nature of the ISR program, which is able to teach babies the “self-save” skills (that of orienting yourself in the water and floating to the surface) in just four weeks of daily 10-minute lessons. The babies are taught slowly to do everything from floating to holding their breath.

Of course, the Infant Swimming Resource is just one of many organisations that teaches swimming and aquatic survival skills to young children. While some parents rely on pool fences, supervision and so on to protect children, the fact is that these protections are not fool-proof, and children are still at a high risk of drowning when they have no familiarity with the water.

There may be criticisers to this video in Australia, but the fact is that last year, there were 271 drowning deaths in Australia. More tragic is that there has been a 30% increase in the number of children under five who drowned in Australia this year. That’s six more families who will grieve for children lost prematurely to drowning.

It’s also worth drawing attention to the fact that in 81% of these cases, the death occurred because a child had fallen into the water during a period in which adult supervision had lapsed. In this age group, the most common location for a drowning death was home swimming pools. We’re obviously missing something when it comes to preventing the deaths of children from drowning in Australia, but consider this: a child can drown in an incredibly short time when left unsupervised, sometimes in under a minute. But in the video, little Josie was able to float, unassisted, for almost a minute and a half. Clearly, this is a success worth replicating.

At just a few months of age, I learnt survival swimming skills in my family’s backyard pool. My parents were motivated by two things. The first was my mother’s inherent fear of the water, which had come about from a close drowning experience as a youngster when she was not a strong swimmer. The second was the death of a toddler in our social circle, who had drowned in a lake when he wandered out of sight during a busy family gathering.

Using the 1-2-3 method they taught me to hold my breath underwater, to kick to the side and hold on when dropped in a pool, and to float unassisted and without panic. By 18 months, I was a competent swimmer, not so much that I could be left alone, but so I would be comfortable in water and safe from risk. Our home videos make it look scary, with my parents passing me back and forth through the water before I could even walk. But at the end of the day, it was their dedication, just like Keri Morrison’s dedication, that made me safe and confident in the water. Personally, I think that all children should learn how to swim as soon as possible so that we, as a country, can lower the number of drowning deaths once and for all.

So, have you taught your baby to swim? Almost Half Of Australia’s Working… 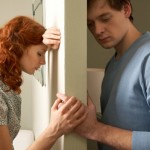