What have I got to do to get regular sex?
Answered 23 minutes ago
Pee in shower?
Answered 26 minutes ago
I cannot afford the mortgage
Answered 4 hours ago
How much older is too much?
Answered 1 day ago

Ladies, have you married a man with an ex-wife and children from a previous relationship?

If you are one of the lucky ones who answer yes, I sincerely hope that you all enjoy a reasonable relationship, free from drama, vindictiveness and other abominable behaviour. If you do, I envy you. As do countless other second wives and stepmothers.

If you’re one of the unlucky ones who has an ex in your life that causes trouble, blogger Constance Hall thinks you should suck it up and treat the source of your problems like a QUEEN. That’s right a queen. And she didn’t omit the word “drama” before queen.

Constance believes that all biological mothers just have their childrens’ best wishes at heart, which absolves them of all personal responsibility and justifies them in being “arseholes”.

In a Facebook post that had me wanting to fill my sick bag to the brim today, that at the time of writing has been liked 16,000 times and shared almost 3,000 times, Hall wrote:

“If you happen to meet a new lover who
Already has children…
Run….
To the nearest jewellery shop and put a fucking ring on it.

A partner who already loves a child more than they love themselves is a gift, it cuts out so much of the crap a lot of us go through to reach a true love. Kids cut through crap. Fact.

Yes, step kids can act like monsters, users and abusers, they require a tremendous amount of patience. But be patient because they are worth it, they are a grumpy little blessing just waiting to reveal themselves, a friendship like no other.

Your partner’s ex? is a queen, she might not feel like your queen but a queen none the less. You might have heard the worst stories and you might have only seen her arsehole side, she is protecting herself and her baby. You are holding her heart and soul when you hold that child’s hand.

To then go on and have more children with someone who already has them is probably the smartest thing you can ever do.
It’s what you call the family jackpot.
Even if your step child took a while to come around to you, they will love your baby instantly. What a gift? Instant older sibling love for your baby.

Blessed is the family with halves and steps and in laws and weird ex’s that still come to family gatherings and foster kids tiny branches of love that spread in all directions.

There is no halves in the love that a half brother or sister feels for each other, there are no steps in between the love you will have for your step child.
You are blessed. “ 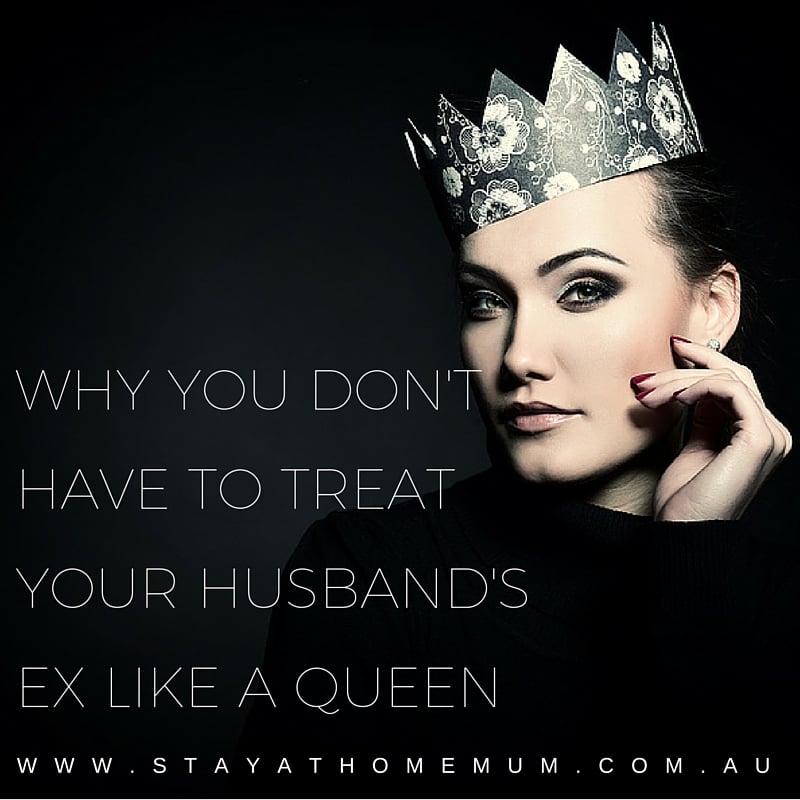 As a 13-year veteran of stepfamily life, this is some of the worst advice I’ve ever read. And I have to question Hall’s credentials and personal first-hand experience in the wonderful world of family blending.

Let me be perfectly clear: if you are in a situation where you get on well with your husband’s ex and the children treat you with respect, and you in return don’t go out of YOUR way to be an arsehole to the ex and the kids, Constance’s advice might work for you and your family dynamic. I agree with her. YOU ARE BLESSED. Seriously. You don’t know how bloody lucky you are!

But if your blended family does not conform to the Brady Bunch stereotype that has been foisted upon us by popular culture, that doesn’t mean you are a failure. It also doesn’t mean that you have to have no boundaries and allow others to shit on you from a great height because they happened to be married to your husband previously.

And yes, there are lousy stepmothers out there too. But thanks to the Walt Disney Corporation, you only ever hear about how we are all evil by default, and all biological mothers are saints.

When I met my husband 13 years ago, I wasn’t even remotely prepared for the road ahead. I knew he had an ex wife – who had moved on and remarried – and children from that relationship. I assumed that they could and would both act like adults and always do what was best for their children. I had no desire to “replace” her or take on her role as mother, always insisting that my role was only to support my husband in the way an aunt or another extended family member might do. They already had a mother. I figured it was important not to try to overstep that boundary.

This attitude wasn’t reciprocated, of course, and for the first few years, I endured drama after drama. Constant drama, in fact, as she found new and improved ways to cause problems. Suffice to say, I can’t go into everything we ever put up with because of a little thing called section 121 of the Family Law Act, but I can assure you after everything she did to my husband, me, and the children, I have no desire to treat her as a queen. The word I would use is probably not fit for publication.

Having been involved in a support group for people in stepfamilies, I know lots of tales of absolutely appalling behaviour that should never, ever be rewarded. Sometimes, the parties are biological parents, sometimes stepparents, sometimes stepkids. I thought I’d apply some of Connie’s logic to some of the terrible real-life cases I know of. Let’s see how well it measures up to reality:

1. Husband’s ex wife is denying contact for no good reason.

THAT’S OKAY, THIS WOMAN IS THE QUEEN AND JUST HAS HER CHILDRENS’ BEST INTERESTS AT HEART!

2. Mother won’t allow the kids to talk to their dad on the phone at his court-allocated regular contact time because she’s waiting to hear from her drug addict boyfriend who is in jail.

ONCE MORE, TOTALLY IN THE BEST INTERESTS OF THE CHILDREN!

3. Your stepdaughter lost a tooth on her dad’s access time  – he has 50% shared care.

His ex is at the front door going batshit crazy, threatening to break the door down, because she has determined that only SHE is allowed to have tooth fairy duties!

SHE CAN BE VIOLENT AND DESTROY PROPERTY, REMEMBER, SHE IS THE QUEEN!

4. Your partner is punched in the face by his ex-wife, in front of their child, at hand over at the end of an access visit, because even though they’ve been split up for two years, he’s gone and gotten a new girlfriend.

HE DESERVES TO BE PUNCHED IN THE FACE FOR THAT BY THE QUEEN!

5. You pack your stepkids’ lunches, like you do every day.

Your stepkids’ lunches end up in the bin like they do every day because their mother shows up at the school fence with Maccas, telling the children not to eat the poison you’ve packed for them.

HOW DARE YOU BE ANNOYED! SHE IS ROYALTY AND YOU ARE SCUM!

6. The ex-wife finds religion in a big way and encourages your stepson to refer to his father not as “Dad” but as “An Enemy Of God.”

If you are the sort of petty bitch who has a problem with this, seriously, get out of those kids’ lives right now. It is perfectly acceptable for their mother to allow and encourage this because…

GOD SAVE THE QUEEN!

It took me several years of navigating bad advice like Constance’s before I decided I couldn’t keep going on with the drama anymore. People say these things thinking they have the best intentions of everyone at heart, without even contemplating that families in general  – never mind STEPFAMILIES – are so bloody complicated, there is no one-size-fits-all approach to doing it properly. Eventually, I put some very firm boundaries in place and patrolled them constantly.

Because as a stepmother, I do not have to accept being someone else’s verbal punching bag.

Because as a stepmother, I do not have to accept being a second-class citizen in my own home. Nay! In my own life!

Because as a stepmother, I do not have to accept being treated like society’s toilet paper.

Because as a stepmother, I am not a servant there to do the queen’s bidding whenever she demands it.

Because as a stepmother, I’m not going to put up with some woman I would never choose to be friends with, being an arsehole to me just because people like Constance Hall fuel her narcissism and tell her she’s the “queen”.

In fact, there’s a better term for someone who acts like this, and it isn’t “queen”. It’s a “golden uterus”, as coined by Dr Tara Palmatier, to describe a specific kind of high-conflict ex partner:

“Golden uteri, despite the sense of superiority and entitlement they derive from the title “mother,” are typically lousy parents if not downright abusive parents. GUs are often the high-conflict, abusive personality-disordered parental alienators. They are the women who expect others, including their own children, to sacrifice everything at the altars they erect to themselves. Golden uteri lay golden eggs (children) and milk their motherhood, the children and you for all you’re worth.”

Stepfamilies are no different to ANY relationships. You do not have to accept abuse from anyone, ever, no matter what their back story is. If your husband or boyfriend constantly treated you like shit, everyone would tell you not to stand for it. So what makes this acceptable?

If my husband’s ex-wife is the queen, I am officially, proudly, 100% a monarch-free republic.

Should My Kids Have To Dress Up For Gran?

We have a couple of ideas on what to wear when meeting Gran that shows they put in A LOT of effort....

Mums on Drugs: One Mother’s Struggle with Depression