Talking to children about sex and puberty can be hard for parents to do.

Sure, kids need the information, but it’s easy to feel uncomfortable about how much they should know and with the fact that they’re growing up too fast.

Unfortunately, whether you want them to or not, your kids are growing up, and talking to them about sex and puberty is just a natural part of that. Remember that if you don’t tell them about it, they’re going to find out for themselves from less reputable and trustworthy sources (i.e. the internet).

So you need to have a chat with them, or preferably a number of chats as they grow. At the end of the day, all kids are different, so it’s entirely possible for you to see your child is ready for more information due either to curiosity, circumstance or early development.

Here are some tips to get you started..

The assumption that kids are not sexual beings prior to puberty couldn’t be more wrong. Even babies have body curiosity and will touch and explore their genitals. At this stage, it’s important to lay the foundations for talks that come later, including always using the correct terms instead of cutesy terms for their genital.

2. Start talking to them about it by the time they reach the age of 5.

By this age, kids are pretty curious about how life works so you might already be fielding questions about what sex is, why different genders looking different, where babies come from, how they get there, and so on. This is a great time to talk to kids because they’re curious instead of embarrassed, and that curiosity can be a good jumping point. At the same time, if your child still hasn’t asked, you can broach the topics yourself.

This is the start of the ‘age of embarrassment’ for any topics relating to sex and puberty, which to kids in this age group is resoundingly judged as “gross”. Tweens might think they already know it all, or at least try to convince you of as much, but the truth is they still need information and reassurance, particularly about the changes to their bodies that are coming. It’s important that they know change is normal, that sex isn’t a ‘bad thing’ but that it’s something for adults, not for kids.

4. When they become teens, make them feel comfortable when talking about it.

Teens have a lot of big life changes happening around them, from wildly unpredictable hormones to the stress of school and planning for the future. There’s also a fair bit of pressure, from peers and unrealistic media expectations, for them to become sexually active. They’re likely to reject your input, but it’s still important that you’re there, talking to them and advising. If they refuse to sit and listen, or feel awkward, have discussions in the car where eye contact isn’t required.

5. Fit talking about it in your daily activities.

The earlier you begin to talk about sex and puberty, the more open your kids are likely to be about hearing you talk about these topics. If your children are easily embarrassed, or you are, then don’t stress too much about sitting down to ‘have the talk’. Instead fit it in around your day-to-day activities, allowing you to tackle smaller topics on a regular basis instead of at awkward, pre-planned intervals.

It’s easy when you start talking to your kids about adult topics, particularly sex, for the conversation to revolve around “don’ts”. Statements like “Don’t have sex”, “Don’t get a disease”, “Don’t fall pregnant” are all relevant things to say, but too many negative statements can have a negative effect. Remember that “do” statements like “Do wait for the right person” and “Do practice good sexual health” and “Do make sure you’re ready” are relevant too.

Your job as the parent of a growing child is to be a teller of truths. This works a lot better if you don’t start with lies about sex. Avoid the stork and the cabbage patch, stick with the facts, even if you feel you have to withhold some information they aren’t ready for. Make sure you also dispel myths they come to you with, respecting their own intelligence and avoiding talking down.

8. Make media work for you.

The media can be a real obstacle to parents who want to have control over how their kids learn about sex and puberty. However, if you spin it, the media can actually work for you. Use the good and the bad of what is presented to your kids via media outlets as starting points for conversations about sex and relationships. Be cautious of judging characters in the media, as kids connect with these people and that judgement carries.

Parents know best, but you have to be careful not to drown out your child’s questions and worries when it comes to topics like sex and puberty. Being a sounding board is a great way to help, and sometimes, listening is so much more important than talking. Also, try to have a focus on asking instead of telling, allowing your kids to let you know how they feel about different topics without asking too many questions, or overwhelming them with your own ideas.

A non-judgemental attitude is so important in maintaining an open and communicative relationship with your kids. It might be difficult for you to maintain, but it really is integral. Work to be generic in dealing with difficult subjects if that helps, removing your own personal bias and your child’s own potential experience from the matter. Make sure they know that you’ll always be there to support them, and don’t lean too heavily on the concept of them ‘disappointing’  you, which is likely to lead to them feeling less inclined to talk.

In all of your conversations, from anatomy to the nature of relationships, it’s important to remember the role that love has to play. Sometimes, we get so caught up in covering the specifics of sex and puberty that we forget what they’re for. The importance of romantic attachments, starting when kids are teens, cannot be discredited. Even if you don’t think that teenage love is much to celebrate, they do so step carefully.

What are your tips on talking to kids about sex and puberty? 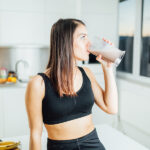