The backyard garden, and the trend of ‘home grown’ has never been more popular in modern day Australia.

With the rise of the organic lifestyle, so too have people begun to embrace once again the journey of growing their own vegetables. But, for those whose green thumb is more brown and wilted, it can be difficult to get started in the planning and execution of your growing wonderland. This is particularly true when it comes to what vegetables to plant. After all, nobody wants their first garden to be a total failure.

Well, there’s hope yet! Have a look at some of the best vegetables to grow below, and what you need to consider for each one. Before You Start Your Vegetable Garden

Before you go out with your spade and your veggie fertiliser, you need to have a bit of a think about your local climate. In particular, you need to understand Australia’s five different climate zones: tropical, subtropical, arid, temperate and cool. If you live in the north of Australia, you’re in the tropical climate, a little further down you get to subtropical and so on. Arid covers more of Australia’s centre and part of the west, while temperate is most of the southern cities. It only really gets cool down in Canberra, Melbourne and Tasmania.

Have a look at the diagram below, from ABC to get you started. When To Grow Your Vegetables

The other thing to think about before you get started is growing seasons. Just because you can get certain vegetables all year around at the shops doesn’t mean you’ll be able to grow those veggies all year around. There are some things that flourish all year, but you’ll find that during certain seasons (i.e. intense cold or hot) some vegetables just won’t make it. Do yourself a favour and read up on local growing seasons before you plant.

The Easiest Vegetables To Grow

The good news is, there are some vegetables that will just love your garden, and are almost impossible to get wrong. Seriously, your toddler could take these from seed to table without much more than a picture book for a manual! We all love the taste of tomatoes, but anyone who has ever grown them at home will tell you there’s just nothing like the taste of a tomato straight from the bush. Cherry tomatoes are particularly popular as they tend to produce pretty quickly, and the same goes for Roma. They don’t need tons of space, but the tomatoes they produce can be stunning. They like a bit of sun, and will usually produce fruit within a few months. Soon, you’ll be sick of it!

Rumour has it that if you plant tomatoes near basil (another great starter plant), the tomatoes taste better. They’re food friends.

Lovers of sunlight, the warmth, and space to stretch, these babies are great for smaller gardens. Set up a trellis, give them lots of sunlight to start with (don’t crowd them) and watch them grow. Regularly watered, most cucumber plants grow like weeds, and within a month, you’re probably going to have too many. All we’re going to say is, if you’re growing cucumbers, make sure you’ve got a good pickle recipe tucked away. You’ll need it!

Leafy greens are something that we always feel we’re paying too much for at the supermarket. So, why not just grow it yourself? Leafy greens are so easy to grow, you’ll be kicking yourself that you didn’t try it sooner. Plants like lettuce like a little bit of sunlight, but not too much, and don’t mind being crowded with their buddies. They also love to be picked, and can be picked pretty soon after planting, no more than a month or so. Silverbeet is another green to consider, as it’s almost impossible to get wrong and tastes great in everything!

With enough room to move, a good amount of sunlight, and some patience, you’ll be drowning in the stuff. Zucchinis are a little more specific as to their needs, but even a beginner gardener can keep them happy. Make sure they’ve got lots of space, as you’ll find that one happy plant will produce more than several plants crowded together. The veggies can get pretty big, which is another reason you’ll want to make sure you’ve given them enough room. They take about a month to flower, and you should be picking a month or more after that.

Radish might be a bit of a nothing food, but if your inner gardener needs an ego boost, then this is the plant to give it. Stick the seeds in the group, water regularly, and in six weeks, you’ll already be harvesting so many, you won’t know what to do with them. The only way you can kill a radish is by totally forgetting about it. Great in salads and as a snack with dips, radish is pretty versatile and worth growing. Remember to harvest regularly, when they reach size, or your radish will become tough and yukky.

Considering how much you pay for herbs at the supermarket, you won’t believe how cheap it is to grow them yourself, or how easy. Herbs are hardy, and certainly something the beginner gardener should consider. They like sunlight and water, as well as good quality soil, so if you provide all three you’ll be set. Although you can grow them in pots, it makes more sense to put them straight in the ground as they grow so quickly they can become pot bound. Give them time to settle into growing before you pick them, but remember that herbs love to be harvested, in moderation. It actually helps them grow. We’ve all paid too much for spring onions only to find that we always want more. Well, the good news is, now you can. In fact, you don’t even need seeds for this, just plant your spring onions with the roots intact straight from the shop. In really good soil, you can harvest in just a few weeks, but even in poor soil, you won’t need to wait more than six weeks. Spring onions prefer soil that’s heavy on compost and manure, but they can grow very close together without issue. Water them, and when you want to harvest just chop them off at the bottom and enjoy. They’ll grow straight back again!

So, what are you growing this year? 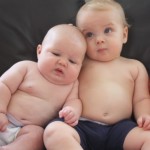 Unborn Babies Given Medication To… Do you have a daily routine at home (do things at regular times like meals etc) or just go with the flow?
Answered 7 hours ago
Just a vent really…
Answered 1 day ago
Did you suddenly had this urge to hook up with someone when you and your SO decided to get married?
Answered 2 days ago
Do you make your kids breakfast or do they do it themselves?
Answered 2 days ago