A men’s health foundation laid out 191 pairs of shoes, to represent the men who committed suicide in Australia in the last month.

Movember Foundation, the organisation behind the display, has been praised for its approach of bringing the statistics to life. In the month of October, an enormous 191 men lost their lives to suicide. Each pair of shoes represented one of these men, and they were of all shapes and sizes to showcase how widespread the issue of suicide is in our country. In Australia, the number one cause of death for men between 15 and 44 is suicide. This means that on an average day in Australia, six men will take their lives. The Movember Foundation timed their display appropriately on the first day of November, a month the charity has dedicated to raising awareness for various aspects of men’s heath. Suicide is just one of these, but it’s not the organisations only focus. While they do raise funds for suicide prevention, they also raise funds for other aspects of mens health, including prostate cancer which will kill 3,300 men this year. 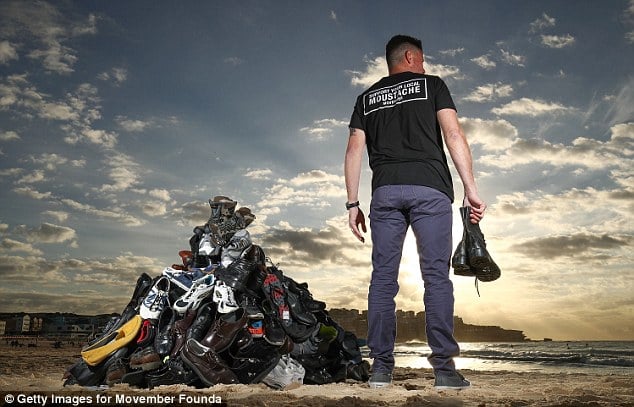 On their social media account, the Movember Foundation had this to say:

“Together we can stop men dying too young. Men’s health is in bad shape and we need action to change it. That’s why we Mo.”

The shoe demonstration was well received by the foundations’ fans:

“Numbers on paper sometimes are not understood… 191 pairs of shoes on a beach puts it into perspective… wow. Too many!” said one commenter Andy Arnold.

The issue of men’s heath has been thankfully in the spotlight more regularly as of late, and not just because of the fantastic work of the Movember Foundation. An Australian series called Man Up, screening on the ABC, has been bringing the issue back into the public mindset.

Hosted by ‘bloke expert’ Gus Worland from the Sydney Triple M Grill team, the series has taken aim at the stereotype of the Aussie man. Breaking down barriers and targeting hard-to-discuss topic, the series has been widely embraced and celebrated for its message.

If you or anyone you know needs advice or counselling, here are some helpline numbers to call:

Here’s How You Can Help Eradicate Period Poverty

52% of those living in extreme poverty are women and young girls...and they can't afford to buy pads or tampons.

20 Random Facts About Your Period

We all know the ins and outs - but some of these surprised me!

This October, Support Hat Day To Lift The Lid on Mental Illness…