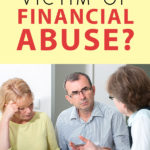 Abuse takes many guises in relationships. The most obvious and often talked about types are physical and sexual abuse.

Then there’s emotional and psychological abuse. But the type that doesn’t get discussed a lot, that is just as damaging as the other types, is financial abuse.

A staggerying 99% of domestic violence cases also include financial abuse. In fact, financial abuse is often the first sign of abuse in a relationship.

What is Financial Abuse?

Financial abuse is when one partner withholds money, controls all the household spending and refuses to include the other partner in major financial decisions. Sometimes also known as economic abuse, it’s an insidious part of family violence…and many people who are experiencing it don’t actually realise that it is abuse until the relationship is over. It often goes undetected and unreported when it happens because people tend not to speak about their finances to others. Other times stereotypes about women being addicted to shopping and not to be trusted with money help to reinforce the perception that men are better money managers and therefore should have complete control of their household budgets.

Financial abuse has been recognised under family violence laws in Victoria, Tasmania, South Australia and the Northern Territory for several years now, but there isn’t a lot of public awareness about the issue.

According to the WIRE Women’s Information Service in Victoria, one in three Australian women experience family violence in their lifetime with financial abuse conservatively estimated to occur in at least 50 per cent of family violence cases. There are often long-term financial consequences for these women and their children.

There are different ways that financial abuse can occur…

These are the most common ways financial abuse is inflicted:

You might be a stay at home mum who relies on your husband’s income 100%. You may work and contribute to a joint account that you are prevented from accessing –  not being allowed your own debit card or PIN.  Either way, when the only way you can access money is by asking your partner for some, you are placing your very existence in the control of your partner.

2. Having every single dollar spent scrutinised

Financial abusers may look at your receipts for even the most mundane things like groceries and go through them with a fine-tooth comb, demanding you account for every single purchase.

The blowback for spending money you aren’t “authorised” to spend can range from being given less money to purchase necessities in the future to physical and emotional abuse for stepping out of line.  This can even extend to how far you drive the car – if you’re allowed to drive it at all – accounting for every kilometre and every drop of petrol.

3. Not being allowed to work or study

In many families, having one parent decide to stay home to raise the kids is a joint decision that has been reached after weighing up varying factors like whether it is an affordable option or if it is a lifestyle that they want.

However, that isn’t always the case.

In some relationships, some women are told by a controlling partner that they aren’t allowed to work, at all, and have to stay home to cook and clean (and if you combine this with not being allowed to have any money at all, there’s a word for this: slavery!) Or, if they are given “permission” to get a job, they can only do so if they work part-time, reduced hours, stopping them from becoming financially independent.  In other cases a woman at home with the kids might want to study so she can have a career later on, and her partner forbids it.

The financial abuser might place restrictions on how the family budget can be spent while spending recklessly himself.

The attitude is usually that it is “his” money, so he can spend as much as he wants on things like alcohol, cigarettes and entertainment while depriving his wife and children of necessities like food, clothing and educational items.

5. Running up debts in the other partner’s name

Sometimes a financial abuser will do things like putting the utility bills in the name of the other partner, making them responsible for them in the event the relationship deteriorates. It goes without saying that if the abused partner has no access to money, this is a recipe for disaster should the worst happen.

Other times they might rack up large amounts of debts in joint names such as on a credit card. If the relationship breaks down, the abused partner might be left with the burden of the entire debt. In Australia, just because a loan is a joint debt doesn’t mean you are only responsible for half.  Both people are responsible for the entire debt if the other can’t pay. There’s a term that’s sometimes used to describe this: “Sexually Transmitted Debt”.

In some cases of financial abuse, one partner is kept completely in the dark about all of the financial matters. You might not even know which bank your other half banks with. You might have no idea if there are investments. They might be spending lots of money on things you have no idea about.

If you ask about your household finances and they refuse to tell you, that’s a pretty good indication something isn’t quite right.

Ultimately, the longer you stay in a financially abusive relationship, the harder it will be to leave.

The Impact of Financial Abuse

Abusers know that if you have no access to money, you will find it difficult to establish a new life away from them.

Women who leave financially abusive relationships are extra vulnerable to homelessness and poverty afterwards and can be disadvantaged in property settlements and legal processes. If their ex has the ability to pay legal costs, they might find they are going through courts for many years, accumulating debt. Sometimes they’re too afraid of their ex to attempt to get a fair settlement. Ongoing, many women also find that their former partners continue the financial abuse after separation by manipulating the child support system.

What To Do Next

Financial abuse rarely gets better with time.  If you think you are being financially abused and don’t know how what to do, contact a family relationship or women’s service for advice and they can link you up with help in your community.

We have some hotlines and suggested websites here for further information and advice.

Are You A Victim Of Financial Abuse? We look at the legal side of being a Grandparent

Who Should You Put First: Kids or Husband?

They raised the man you love - surely they can't be that bad right?