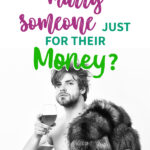 Would You Marry Someone for Money?

In days of “ye olde” when no-one ever considered marrying for something as trivial or as basic as love, women married for status (which is a fancy way of saying money!)  In fact women didn’t get to choose, their families did the choosing for them.  Mothers groomed their daughters their whole lives before marriage to be able to cook, look after the family finances and keep themselves pure and pretty so that they could snag the very best husband they possibly could that would provide them and their families with a better quality of life.

“Marrying for love is really a modern tradition.”

For most of us now, the thought of marrying only for money seems ‘weak’. Like it is the easy way out for pretty girls with big fake tits that don’t want to work, but want to be the decoration on someone’s arm.  They are the type of women (and sometimes men) that you gossip about behind the water cooler at work.  ‘Oh she just married him for his money, and he married her for her looks.’  They are gossip fodder.  Not real relationships.

On the flip side of the coin, the modern term ‘Trophy Wife’ as opposed to a ‘Starter Wife’ is thrown about.  Trophy wives are the second, third or fourth wife, usually a younger, tighter version of the original.

Karl, we will never forgive you for dumping your Starter Wife!

The first wife is the ‘Starter wife’.  The workhorse wife who had the children and supported her husband before he made all his money and then dumped her to ‘trade up’.  Hearing about trophy wives and starter wives in the media makes the plainer of us women folk even more insecure… like we are somehow less because we weren’t genetically blessed.

But is it really such a big crime to look for someone financially stable? And is looking for that stability the same as marrying for money? I don’t think so.

Personally, I would never marry someone that didn’t have a stable job and income, a drivers licence and reliable vehicle, and the ability to put deodorant on every morning. Does that make me a snob or just smart?

If you marry for money, you’ll earn every penny of it.

Money or Lack of it is the Leading Cause of Divorce

With the leading cause of divorce these days being money issues, could getting married for money be a positive thing?

Well no.  Apparently, no matter how rich or poor you are, arguments about money happen at all levels, and it takes longer for couples to recover from money arguments than any other quarrels. It is best to have open and honest discussions about finances, and who controls what before you tie the knot, and it is never a good idea for one person to attend to 100% of the finances. If one person is frugal and the other loves to spend lavishly, this will always be a cause for distention in a relationship.

Marriages, where both parties have the same attitude to money, are inherently the most successful.

We asked the question on Ask Stay at Home Mum

‘Would you Marry for money?’ and here are some of the answers

(plus some extras from other sites!):

“I didn’t, but if I ever get married again (if this one ends in divorce or widowed) I’d consider marrying for money. Judge away I don’t care. My dream job needs a degree, and degrees cost money and so does childcare.”

“Honey, steer me in that direction.  I’ll Google wedding dresses on the way!.”

“Yes and no.  I wouldn’t marry a man for money but I would expect that he can hold down a job, be good with his money and have career goals.  I expect these things because they are all things I do have myself.  Sharing values when it comes to finances is very important in a relationship.”

I Would NEVER Marry for Money

“I would never marry someone unless I considered them an equal partner in my life. A loving marriage to someone you like and respect can make your life infinitely better, a loveless marriage to someone you are with for convenience’s sake can make your life a misery. One of the unhappiest women I ever met married a very rich man. It brought her no joy. I would sell my body for money before I sold my life for it.”

Love is a Stupid Reason to Marry Someone.

“Love is the most stupid reason to marry someone. The decision about marriage should always be made cool-headed, and the reason being money is quite okay. The only thing is that smart women not only take the bank statement into account but also what kind of a person they are marrying, and they always plan an exit strategy, even if he’s a good one. I have several smart friends who married into money and none of them is as miserable as many comments here paint such girls to be. If your girl approaches this as a business deal, and not as a random whim, she’ll be fine.”

What Does the Man Get Out of It?

“While I guess I can see the allure of the perks, I can’t help but wonder what the guys are like who would agree to this sort of relationship? I mean, what are they getting out of it, especially if there’s no love, friendship, sex, money… No one is going to selflessly marry a gold-digger.”

“I’m not good enough at interpersonal relationships to make it a worthwhile proposition for either party.

Faking a marriage is far harder work than my current job, so if I were even to consider it, I’d need far more compensation than I get for my current job.

But I’m simply not good enough at emotional labour, sex, acting, household management, people skills, etc. for my services as a sham spouse to be anywhere worth the amount of compensation it would take to entice me to do it.”

It Wasn’t Worth it!

“My best friend and I joke around all the time that we’re going to marry some rich old guys and then marry for love after they die. We happened to be saying this while on line at Victoria’s Secret one day when the woman in front of us turns around and says “I did it, it wasn’t worth it.”

I’m Not Stupid Enough to Think This Will Last Forever

“I have never married, but I have been living with 3 different men over the last 6 years.

My family fled from what is now Croatia when I was a kid. My family was pretty messed up, when I got an ‘offer’ to live with one of the more respected gang leaders in my area i left my family and hasn’t spoken to them again.

Since then I have been sort of moving up the food chain and I am currently living with an middle aged CEO who spoils me to no end.

I have never been in a loving relationship, and I’m not sure I know what that means, but I know I love my life the way it is now. I do plan for a future when Im old and ugly, and I have enough set aside to still live a fairly decent life if I’m kicked out today. Also, I’m not stupid enough to think this will last forever.“

Via Girl With a Past

“While I didn’t marry for money, I found out he had a shit ton of it.

I married young and was very stupid. The man I married, I thought, was an average guy – not well off, but not struggling. He came from a very sophisticated and educated family, so I knew they weren’t idiots, but I didn’t realize how much money they had until after I married him.

As the marriage went on, the more money I realized that he had, and the more I realized he was a miser. His entire life his family had the money to spend, but chose to live as close to the bare necessities as normal. Now, I’m not knocking this, as evident by the fact that this money had more money than any other family I knew, and mainly because of the lifestyle that they decided on, but I am knocking how he ended up treating me.

I came into the marriage with nothing, as most 21-year-old girls getting married come into a marriage. He, as I found out, had a lot coming into the marriage. Didn’t sign a prenup. He was also seven years older. From the day I said “I do” it was an indebtedness. I constantly “owed” him for everything he ever “bought” for me. And he made sure I knew that.

After I realized I had stopped eating because I didn’t want to explain why I was spending money because he checked the bank statements daily, and would comment on “Somebody got breakfast this morning!” or “somebody bought x, y, z” today, I decided the marriage wasn’t worth it.

If I wanted to marry for money, I would have stayed in that marriage. His sister and brother just had babies – they got $30k a piece just for the kids from trust funds.

Money is the root of all evil. I avoid it like the plague.“

And the best one (In my humble opinion)

I’ll Make My Own, Thanks!

I actually prefer to earn my own money rather than depending on a guy to put food on the table. I enjoy working and my life motto has always been – never wait for a guy to call you the next morning and pay for your bills –

Money surely is important, but not everything. I found after being able to fulfil my basic needs, love and companionship goes a long way. So marry someone for money is not really the case for me.”

Via I Am Fucking Fun

Want to join in the anonymous conversation?  Pop over to Ask Stay at Home Mum 10 Signs You Should Leave Your Partner

If you have one of these toxic relationships, you should probably leave.

13 Reasons Why Women Don’t WANT to Have Sex

Sometimes we really do have a headache.

They raised the man you love - surely they can't be that bad right?