These days, you’d be hard-pressed to find an individual who doesn’t hold one, if not multiple, social media accounts.

So with this new technology being so readily available and the voyeuristic masses ready to snap up every tidbit of information that we share, just what is acceptable and what is not when it comes to Facebook posts?

Here are the top ten things you should avoid posting on Facebook.

It’s one thing to share some superfluous information on social media networks, but the last thing you want to do is share your full name, date of birth and address. Those information alone are enough to grant access to most of your confidential information. Play it safe and keep those things obscured – no matter how tight your friends list is or how few followers you have. The rule of thumb here is that once it is shared on the internet, it’s available to anyone who wants to access it.

Your kids are gorgeous, that isn’t the argument. And that picture of them frolicking in a bath is way too sweet. But those sorts of images of your children are not Facebook-appropriate. You have no idea who is accessing those images. While there is nothing cuter than a chubby naked baby bum running through the garden, keep it for the private family album. Don’t ever post a picture of your children that you wouldn’t want seen on the 5 pm news.

Worst case scenario: I don’t even want to think about it.

I’m sure your body is banging and why not show it off? But save it for flaunting it in a pair of shorty shorts and not showcasing it on the internet, same goes for ‘accidental’ cleavage shots (if you have to push your arms up under your boobs, you’re doing it for kicks). If you’d be uncomfortable with your Grandma seeing the picture, don’t share it on social media.

There is nothing more irritating than seeing someone on social media whining and looking for some digital sympathy. Cryptic posts engineered solely to draw some poor sucker into giving you sympathy is one of the most irritating Facebook habits out there. “Sarah is feeling sad today” or “Lucy is sick and husband is at work so woe is Lucy” is just plain irritating. Pick up the phone and call a friend. Text your husband and tell him to get home. Just don’t make it everyone else’s problem because you feel like having your ego stroked for a while.

Worse case scenario: People will think you are a douche.

5. My child is better than yours

We all love our kids and think that they’re just that bit brighter, more intelligent, more humorous than everyone else’s. I guarantee though that unless your child is looking into early acceptance to Mensa, they’re the same booger-eating ratbag refusing to do their homework that every mother deals with on a daily basis. Stop trying to make them out to be the next superstar – we’ll all think our own kids are better than yours anyway, so really, who are you trying to convince?

This makes you an asshole. It’s so not cool. I will never forgive the d-bag that ruined Game of Thrones for me! That sort of betrayal and treachery is hard to forgive!

Worst case scenario: The whole TV series you were looking forward to it totally ruined. Just. Don’t. Do. It.

Right up there with people who believe in outlandish conspiracy theories, no one wants to hear your pseudo intellectual, vaguely aggressive political rant. Sure, you may have a different opinion than the guy sitting next to you but it doesn’t mean that he’s wrong. Have your beliefs, even share your beliefs, but don’t feel the need to go all “WAKE UP SHEEPLE!” just because you think your opinion is more valid.

Worst case scenario: Like religion – keep it to yourself. Politics usually ends up in screaming matches or fist fights.

Stop it. Stop it right now. No one wants to play your stupid games or read about your high scores. NO ONE.

Worst case scenario: You will be blocked on Facebook.

We’re all really sorry that you broke up with Bob because Bob had an affair but Bob still owes you money and Bob was a dud in the sack and that relationship is, like, so over. Bob is an asshole and you’re well shot of him but really? Don’t need to know every detail. Go out and get drunk with your girlfriends and trash him at the pub like a normal person, just don’t do it over social media.

Worst case scenario: Your future boyfriend/girlfriend may see it and will think twice about asking you out!

10. Complaining about your job

This is the fastest way to get your silly ass fired. Nothing is sacred on the internet and certainly nothing is private. Do not, under any circumstances, trash your current employer or work environment. It will come back to bite you, I promise.

What do you hate seeing the most on Facebook? 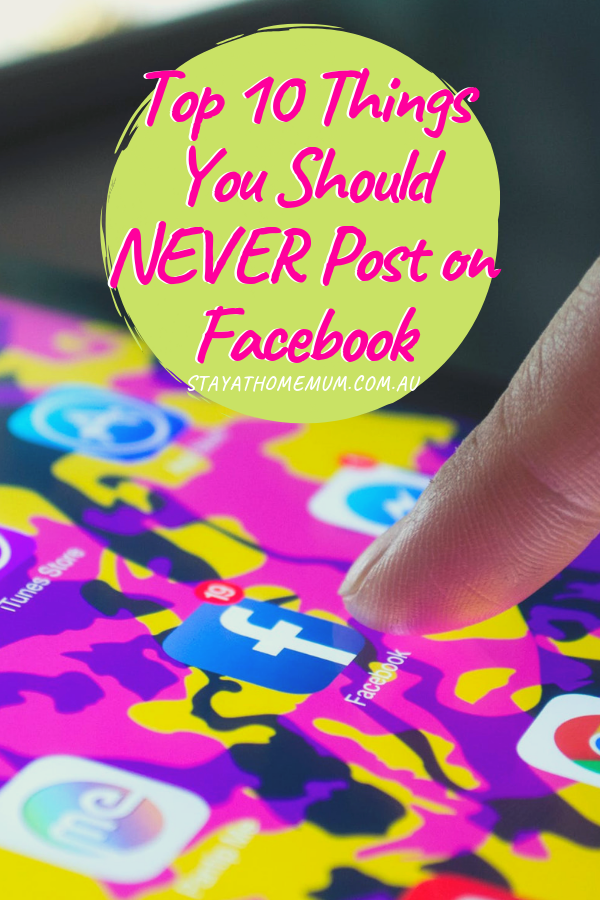 Is It Ok To Share Photos Of Other People’s Kids?

LOL while you're humping animals, I mean helping...