Want to check out the most interesting parenting news stories? Here, we have the most heartwarming to the most heart-rending ones. Catch it up right here!


The word is out that the new Minions toys from McDonald’s are swearing, and parents are unhappy with this news. In a video taken by Paul Butts, a Minion toy can be seen saying what sounds like, “Well, I’ll be damned” as well as the words, “what the f—.” “Originally, we didn’t think anything of it until my wife was moving it out of the car seat and heard something didn’t quite sound right,” Mr Butts said.

But McDonald’s said in a statement that the toys are just speaking “Minionese,” a language made up of nonsensical words and sounds, which is used in the spin-off of the children’s movie, Despicable Me. “Any similarities to actual words are a coincidence,” the statement added.


A New Zealand Dad has caught on camera the moment his son was sucked into a jumping castle at Inflatable World in Auckland. Brendon Ramboul posted the video in Facebook to warn parents to keep an eye on their kids especially in play areas. The video shows Mr Ramboul’s son Deacon bouncing around the castle and when he jumps off a green ball, he suddenly disappears from view. Mr Ramboul posted on his Facebook page:

“He literally was sucked under and into the matting of the bouncy castle. If I wasn’t there watching him no one would have known he was in there. We hate to think what could have happened.”

Inflatable World manager Gary Adamson told Stuff.co.nz  that it was an accident caused by a small opening between the inflatable ball and the edge of the tarpaulin but has now been fixed.

6. Aussie Mum gets over $285,000 for winning case vs Willoughby Council for carpark injury Aussie Mum Despina Cavric will be paid $285,915 after suing Willoughby Council for negligence after a carpark injury. Ms Cavric got a knee injury when she aimed to protect her toddler as the shopping trolley upturned on to her after it hit a pothole in the Northbridge Plaza carpark in Sydney’s north on June 6, 2011.

In May last year, District Court Judge Michael Elkhaim ruled in favour of Willoughby Council but it was ­overturned last Friday after hearing that Ms ­Cavric was suffering pain in her leg, back, neck and hip. Because of this, she was unable to work as a high school teacher or do household chores for her three kids in her home in Northbridge.

Willoughby councillor Angelo Rozos said the payout was quite disproportionate for the injuries. But the case raised questions about the safety of the park. It was also unfortunate that customers of the park would have to bear the expense. 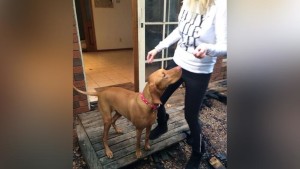 A dog is truly a man’s best friend that even in times of trouble, it may save your life. This happened to a Melbourne family who were saved by their heroic dog, Sizlah, from fire that nearly engulfed their house. Sizlah, a Hungarian vizsla, alerted the family by scratching the bedroom door for an hour before its owner, Victoria Pateman, got up to see what was wrong.

A minute after, the smoke alarm went off and she saw their whole backyard, the deck and the fence were on fire. Melbourne’s Metropolitan Fire Brigade said the fire was caused by a cigarette thrown off the back deck of the Orrong Road home in Caulfield. The fire was extinguished before spreading to the rest of the house. 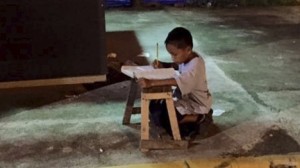 A homeless boy has captured thousands of hearts in this photo shared on Facebook, doing his homework in a carpark in a McDonald’s outlet.

Daniel Cabrera, 9, was photographed by Joyce Gilos Torrefranca, a medical student, who spotted him when she was walking through Mandaue, Cebu in Central Philippines last month. In a report in Rappler, Daniel and his family often slept on the streets and begged for money. But this didn’t stop him from going to school.

Now in third grade, Daniel told Rappler that he wants to finish his education. “I think I want to be a policeman….I also want to be a doctor,” he said.

3. Perth mum makes heart-rending decision for all triplets to be born alive Proud parents Rowan and Chloe, who prefers not to reveal their surnames, have always wanted a daughter. However, they have had three sons: three-year old Evan, two-year-old Otto, and one-year-old Felix.

Then the couple received another news — they’re going to have another baby. When the couple went for an ultrasound, the technician said there were two. And after a few minutes, much to their surprise, another one appeared. The couple will have a triplets — two more boys — and a girl. But 24 weeks into the pregnancy, the little girl is failing inside the womb and is putting the other two babies at risk. An option is to let the little girl die in order for the two boys to survive. But it wasn’t an option for the couple. So at just 28 weeks, Chloe delivered triplets Henry, Rufus and Pearl on July 3.

Pearl weighed only 690 grams, half the size of her two brothers. All three babies are still in hospital while the family’s friends have started crowdfunding campaign to ease the challenges the couple are facing for the babies’ needs.

“Pearl fought so hard to make it to 28 weeks and I had to fight to do what I felt was going to save her life,”  Chloe said. For fear that a child has contracted the dreaded Ebola virus, the parents of the child, whose age and gender have not been released, rushed her to the Royal Children’s Hospital last night to be tested. The child was put in isolation while the family anxiously waited for the results.

Fortunately, the child was given the all clear after tests for the Ebola virus resulted in no trace of the disease.

“The risk of ebola is extremely low and testing for ebola is being undertaken as a precaution only,” Department of Health spokesman Tim Vainoras said.

Unfortunately, the real illness of the child is still unknown.

In February, two girls were also rushed to hospital from Melbourne Airport after doctors suspected they had been infected with the deadly disease during an extended visit to Guinea. The results were also negative. 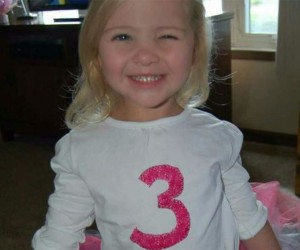 Two young boys who were ill with life-threatening diseases were given a new lease on life after the organs of a young girl were donated to them. This girl is three-year-old Olivia Swedberg, who was diagnosed with a very rare brain cancer with an inoperable tumour and little to no chance of survival. On June 30, Olivia passed away.

Though heartbroken, the grieving family are taking comfort in the fact that Olivia saved the lives of two very ill boys. Olivia’s liver was donated to three-year-old Lucas, who was dying from a severe liver condition called biliary atresia, while her intestines were given to four-year-old Angelo Giorno, who was born with his intestines at the exterior of his body.

Today, both little boys are recovering from their operations. Meanwhile, Olivia’s mum Lauressa says this is a gift she will treasure forever, knowing that her young girl lives on in Lucas and Angelo.

“My daughter’s purpose is to give life to another. I know that Olivia is a guardian angel, looking over them right now,” she said.

What do you think of today’s parenting stories? Let us know! 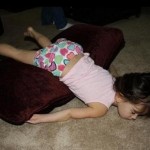 Videos to Laugh At: Hilarious… 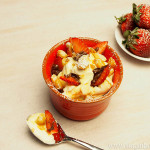