A couple in Florida were arrested after being accused of turning a 13-year-old girl into their sex slave.

Rob Johnson, 44, and his wife, Marie Johnson, 43, from Port St. Lucie, Florida, were believed to have taken in the girl, now a 21-year-old woman, to live with them after her mother died.

The woman told police that she was forced to call Mr Johnson, “master,” and that Mrs Johnson had pushed her against a wall and held her by her throat to make her agree to their sexual demands. She also said that the couple beat her if she fails to follow their orders. She also said that the abuse happened repeatedly until she was 18 years old. She added that she was homeschooled, and that she was not allowed to use the phone, even rehearsing her on what to say to doctors if asked about her sexual activity. She said she was able to leave the home when her grandmother bought her a plane ticket to bring her to Ohio.

The couple were charged with felony sexual assault, but were freed on bail after appearing at St Lucie County Court on Tuesday.

3. Chinese Woman who Wants to Be an Australian Citizen Murders Wife and Grandson of Ex-Lover

A Chinese woman has pleaded guilty to killing the wife and grandson of a man who was said to be her lover for refusing to marry her so she could become an Australian citizen.

Court documents show that Cai Xia Liao, 45, began to blackmail Brian Mach, 61, from Melbourne, after he tried to break off their relationship, threatening him that if he leaves her, she would kill his wife, Mai.

Police say Liao offered Mr Mach a business deal, saying she would pay him to marry her so she could become an Australian citizen, but he refused. Two days later, Liao went to Mr Mach’s house on the morning of March 29, where she drugged, gagged and bound him, then grabbing a garden shears, she murdered his four-year-old grandson, Alistair Kwong, who was then sleeping, and his wife, who just arrived at the house later that afternoon. The couple’s neighbours were alerted of the crime after they heard cries for help and immediately called the police, who then arrived at the scene and arrested Liao at the house.

Liao has pleaded guilty to two charges of murder and one charge each of intentionally causing injury and false imprisonment. During her court appearances, Liao cried audibly as she was led from the dock of the Melbourne Magistrates Court after entering her plea on Thursday. Her lawyer said that she apologised to the Machs family for the terrible grief she had caused.

2. Family of Indigenous Boy Killed by Hit-and-Run Slams Decision Not to Review Sentence Given to Driver The family of a boy who was a victim of a hit-and-run who eventually died, were frustrated by the decision given to the driver who was only given six months home detention.

The parents of eight-year-old Jack Sultan-Page, Faye and Michael Sultan-Page, have appealed to impose higher sanctions to 23-year-old Matthew Alexander, who hit their boy with his car. The boy was riding his bike at the time on Davoren Circuit in Moulden, a suburb of Palmerston, a satellite city on the outskirts of Darwin, last November. After hitting the boy, Mr Alexander kept driving, leaving the injured boy on the road. The boy was taken to Darwin Base Hospital but later died from head injuries. He was charged with failing to stop and render assistance over the incident.

An online petition calling for Northern Territory Department of Public Prosecutions Director Jack Karczewski to appeal the sentence has garnered almost 10,000 signatures. However, Mr Karczewski found the sentencing to be fair. NT Attorney-General John Elferink has told BuzzFeed News that: “I asked the head of the DPP here to review whether or not the sentence was manifestly inadequate. The head of the DPP has indicated that he is disinclined to appeal it on the grounds that the sentence was adequate in relation to the offence for which he was found guilty,” he said.

Mr and Mrs Sultan-Page told BuzzFeed News that they felt deserted by the NT justice system. “He should have stopped and helped. Because he didn’t stop, he should have been charged with manslaughter or something more serious than fleeing the scene,” the couple said. Aboriginal and Torres Strait Islander Social Justice Commissioner Mick Gooda slammed the NT justice system when the sentence was handed down last month, claiming that 86% of the prison population in NT were indigenous peoples. However, Elferink denied such accusations.

An 11-year-old girl in Paraguay, who was denied abortion, gave birth to a baby girl.

Elizabeth Torales, a lawyer for the girl’s mother, told The Associated Press that the girl gave birth through cesarean section in a Red Cross hospital in Asuncion, Paraguay.

The girl was allegedly raped by her stepfather, who got her pregnant, when she was ten. Her stepfather has already been arrested while her mother was charged with negligence. When the girl was five months pregnant, the girl’s mother asked the government to allow her daughter to have an abortion, but the government refused it. Religious groups praised the government for not allowing abortion to happen to the girl, but this earned the ire of human rights groups. Under Paraguay government rules, abortion is illegal except when the mother’s life is in danger. Local health officials say the girl was said to be in good health at the time her mum asked for an abortion. The girl and her grandmother had requested custody of the infant.

What do you think of these parenting news stories today? 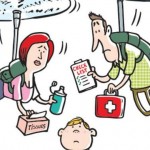 Helicopter Parenting. Is It Ruining… 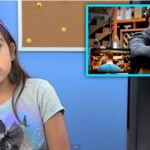 Watch These Kids React to…