Have you checked out the most amusing parenting news stories today? Read on.

9. Three-month-old Boy Surprises Dad by Saying “I Love You”

If your baby could just say ‘Mum’ or ‘Dad’ at only three months old, that would be special. What more if your little one says, ‘I love you!’? That would be magical!

Ted Moskalenko just had that experience with his three-month-old son, Ben. In a video he posted on Youtube, Ted is seen talking to his baby and telling him, “I love you!”

Much to his surprise, the toddler repeated the exact words to him, giving his Dad a heartwarming smile. He captioned his video, “My baby boy Ben said “I love you” for the first time. Good thing my wife had the camera rolling. Enjoy!” The video has now racked up over a million views.

Could there be anything more adorable than ‘baby’ cupcakes?

This is one of the sweet inventions of sisters, Joanna and Leonie Mulley, in their latest venture, ‘cakesbyjojo.’ Joanna decided on taking her hobby in baking to the next level by creating cupcake designs that made Queensland drool. This is their latest design called sugar babies. Joanne showcased her design at her weekly stall at the Mackay Showground Markets and instantly became a hit. She says it can take up to 20 minutes to finish each sugar candy design that is displayed on each cupcake.

“We’ve dressed them up like Pebbles and Bam Bam from the Flintstones, and Elmo and Big Bird from Sesame Street. Everyone’s a child at heart,” Jo said.

7. Daughters to Inherit Hefty Fortune from Late Millionaire Dad Only If…

Great fortune comes with great responsibility. This is what a late father wanted his daughters to live by as he left them millions of dollars after he died.

Real estate millionaire Maurice Laboz has left his two daughters, Marlena, 21, and Victoria, 17, with US$13 million each after he died earlier this year. However, they will only get their hands on this fortune after they comply with his strict conditions.

Marlena will inherit US$1 million (A$1.4million) after she graduates in one of her dad’s pre-approved “accredited” universities. She also has to write an essay describing what she wanted to do with the funds.

Mr Laboz also organised an annual payment of three times the income listed on his daughters’ personal federal tax return each year after 2020 to urge his daughters to work hard and earn big. If they decide not to work and have children, each girl will be given three per cent of the value of their trust annually, but only if the child is born in wedlock. The same payout will be given out if they choose to be the carer of their mother, Ewa Laboz, 58.

Mrs Laboz was left out of her husband’s will as they both were in the process of divorce at the time of Mr Laboz’s death. Mrs Laboz contends that she should be inheriting some amount as she was still married to the millionaire at the time of his death.

As for the two girls, it is better to take it than leave it.

6. Young Boy who Lost Both Parents Aims to Make the World Smile

Losing a parent, let alone both, may rob anyone of a reason to smile. Not this boy.

Six-year-old Jaden Hayes is determined to not let past painful experiences get to him. His father died two years ago, while his mother tragically died in her sleep early this month. Now, he decided to start “the Smile Project.”

In a report on WSBTV, Jaden’s aunt, Barbara DiCola, who is his late mother’s sister, said that Jaden just told her one day to start the project for one simple reason, Jaden is ‘tired of everybody with frowny faces.’ After some brainstorming, Jaden came up with the idea of giving little goodie bags filled with candy and small toys to the busy area of Savannah in the United States. He would give the gift to anyone who ‘weren’t smiling.’

In two days, Jaden made 275 strangers smile with his sweet deed.

5. Two Volunteers with Odd Jobs Successfully Delivered a Baby in a Home Birth

If you think you’ll never need to deliver a baby in your lifetime, think again.

They were racing against time and deciding whether to get the mother to the hospital or just let her have a home birth. Mr Scantlebury said he had about six minutes to decide. “I needed to work out what I needed and what I was going to do and the support of my partner made my job run perfectly – I changed decisions about 20 times throughout the birth. It was my first delivery – the training kicked in and luckily everything worked,” he said.

Miss Meeres was also grateful for the effort of both volunteers. “I was hell-bent on having a home birth but I am just really grateful that they turned up when they did… They are absolute lifesavers,” she said. 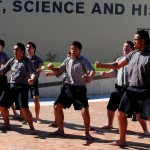 Staff and Students of PNBHS… 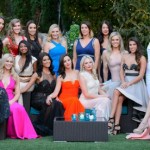 The Bachelor. Got Wood?