The family of ‘Akubra girl’ Amy ‘Dolly’ Everett has released the powerful anti-bullying message the 14-year-old girl wrote before taking her own life after being bullied online.

Before her death on January 3, Dolly has completed a drawing with the words ‘Speak even if your voice shakes’ in bold in the background, which has since been released to raise awareness about how bullying can affect a person. 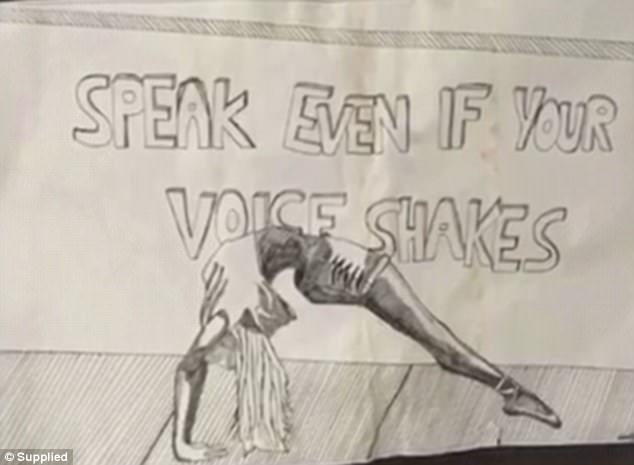 Now, her family, from the outback south-west of Katherine in the Northern Territory, is using the catch phrase to help victims of harassment come forward.

“Speak now even if your voice shakes.

“Let’s stop the bullies no matter where, but especially in our kids, as the old saying goes. You will never know what have until it’s gone.”

Dolly’s father, Tick Everett has thanked loved ones for their support for their family and condemning bullying in an emotional Facebook post. He also sent out his message to those who made his young daughter take her own life.

“I know for some suicide is considered cowardly but I guarantee those people wouldn’t have half the strength that my precious little angel had, Doll had the strength to do what she thought she had to do to escape the evil in this world.

“Firstly if by some chance the people who thought this was a joke and made themselves feel superior by the constant bullying and harassment see this post, please come to our service and witness the complete devastation you have created,” he said. He and Dolly’s mum, Kate, have posted an emotional tribute to Dolly even inviting the online bullies to her funeral to see the ‘devastation’ they caused.

In a statement, the family revealed that they will be starting a trust in honour of their daughter.

“Out of all the sadness that the loss of our daughter has brought to our lives, we feel that through losing Dolly we would like to help other families by making an awareness of bullying and harassment that some people are sadly subject to,” the statement read.

“Our vision is to establish a trust called “Dolly’s Dream” through this trust we would hope to raise awareness around bullying, anxiety, depression and youth suicide.”

“We are not concerned with the who or the why of who pushed our daughter to this point, we just want to save another family going through the sadness and tragedy that our family is experiencing.”

Dolly’s funeral will be held tomorrow and her family have asked mourners and supporters to wear blue – the teenager’s favourite colour.

*Readers seeking support and information about suicide prevention can contact Lifeline on 13 11 14 or Suicide Call Back Service 1300 659 467.