Following the tragic discovery of a mother and her 17-month old baby hanging in a Campsie home yesterday, police are now investigating whether post-natal depression was a factor in the suspected murder-suicide.

The woman, 29, and her young visually impaired daughter were discovered hanging in the Fitzroy St home in Sydney’s south west by the woman’s sister.

The woman’s husband and father to the little girl arrived home shortly after the discovery and collapsed in front of police tape blocking off the home.

Police have confirmed the pair died from asphyxiation and investigations are underway today to find out whether post-natal depression was a contributing factor to the deaths.

The woman, who moved to Australia from Vietnam seven and a half years ago, cared for her daughter full-time.

Friends told Seven News there had been no obvious warnings of the tragedy that unfolded yesterday, which affected all who attended the scene.

“I’ve just been back at Campsie police station where a number of police officers who attended the scene and drove the ambulance to hospital, and assisted in the treatment of the child on the way to hospital – they are clearly devastated and traumatised by what occurred,” he said.

If you or anyone you know is suffering from post-natal depression please reach out for support by contacting Lifeline on 13 11 14.

The True Story of Rose… 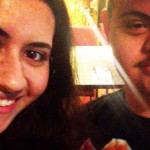