A man who wants to become a father with his gay partner has asked his sister to be the mother of his child — and their mother is okay with it.

Samuel Leighton-Dore, 24, and his partner, Bradley Tennant desperately wanted to have a baby who they say ‘can see where he or she came from when they look up at their parents’.

The pair have considered adoption but after Samuel asked his sister, Bronte, about his concerns, the pair decided to have a baby, together. “The only possible chance my partner and I have of waving our respective biological flags in our future kid’s DNA is if my sister donates an egg for my partner’s sperm.

“Call me selfish, call me vain, call me gross but I can’t think of anything more spine-tinglingly spectacular than finding cheeky glimmers of my parents in the face and personality of my child.”

Samuel, who wrote a children’s book about coming out called ‘I Think I’m A Poof’, said there is ‘nothing remotely incestuous’ about asking his sister to be an egg donor as she would not be carrying the child, but simply offering ‘the bun’ for a surrogate’s ‘oven’. He said people have ‘vehemently challenged’ his desire to become a father to his biological child, while others are concerned that his sister will regret her ‘genetic sacrifice’.

However, Samuel said he believes there is no wrong or right way to bring a ‘loved child’ into the world. He also argued that it is important for him and his partner, Bradley, to be able to see ‘glimmers of their family tree’ in their child’s face and personality. “I want to see my dad’s sensitive disposition and penchant for strange existential literature. I want to see my mother’s fiery hard-headedness and forgetful nature. I want to see my sister’s dynamite creativity and doe-y brown eyes,” he said.

Samuel said his mother has supported his decision, despite the confusion it creates when explaining the origins of her only grandchild. 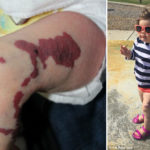 Two-Year-Old Girl Has Too Many…