A mother has saved the life of her newborn son with the ‘kiss of life’ — a first aid technique she remembered from her childhood.

Mum Kristy Will from Eye, Suffolk in the UK, has told of the terrifying moment her four-week-old son Louis stopped breathing in her arms last year. Thankfully, the quick-thinking mum remembered the first aid skills she had learned as a Girl Guide.

A few hours before Louis stopped breathing, Kristy had noticed that Louis was off colour but she thought it was a simple cough and cold. “I’m an experienced mum and I know that babies born in winter can get sniffles so I wasn’t overly concerned,” said the mother-of-three. Earlier in the day, Kristy said she had been taking pictures of her son on her phone before taking him to watch a Christmas nativity play. Then, when they got home, she said that Louis got ill. “When we got home he was sick but I thought it was most likely mucus from his cold causing him to bring his milk up. I decided to call for advice once the older ones were in bed just to be on the safe side,” she said.

Suddenly, when she was sitting with Louis in her arms Googling his symptoms, the baby went grey and floppy. She immediately thought about her Guiding days, then gave Louis the kiss of life blowing gently into his mouth and rubbing his chest and back then, he eventually drew breath but stopped again while she was calling 999.

She said: “The operator asked me to count in-between breaths and when it got to ten seconds and he still hadn’t taken a breath she told me to place my mouth over his mouth and nose and breath into him.

“Maybe it was because of my [Girl] Guiding that I kept so calm because I already had an idea what to do, but I did exactly as she said and after two puffs he took a breath.” Kristy said she had difficulty blowing because her son was tiny. “It was terrifying because he was just 7lb 2oz and so tiny so I knew I had to be careful not to blow too hard. I kept calm and managed to keep going until the responder arrived and took over. Then I just burst into tears of shock,” she said.

An ambulance arrived and took Louis to Ipswich hospital then the following day he was transferred by the CATS team to Addenbrokes where it was confirmed that he was suffering from bronchiolitis, a viral infection which causes coughing and wheezing and can be deadly in children if left untreated.

Nine days after Louis stopped breathing, he was discharged on Christmas Eve. Now, Louis has just turned one, a birthday he may never had seen without his mother’s quick thinking, and Kristy is calling for all parents to learn first aid.

“It appears like a common cough and cold but can be so much worse, especially in tiny babies like Louis.

“While I was in Addenbrooks [Hospital] I was told that one third of the babies in intensive care were there because of bronchiolitis yet so many mums have not heard of it.

“That’s why I want to tell my son’s story because this year will be no different and parents need to know what to do.

“I want all mums to know first aid because the kiss of life saved Louis,” she said.

She hopes to raise money for the hospitals that treated Louis and encourage all parents to learn first aid skills that could save their child’s life. 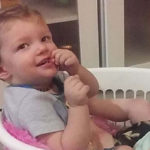 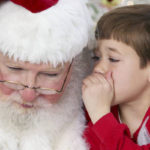