A mother, who has no family history of cancer, has urged women to get early breast cancer screenings after she was diagnosed with the disease while 34 weeks pregnant.

Former Southern Courier photographer Elenor Tedenborg, 45, was already 34 weeks pregnant when she was diagnosed with breast cancer and was forced to have a caesarean section before starting chemotherapy.

She was shocked when she was diagnosed with a stage 2 cancer in her breast and an aggressive stage 3 cancer in her lymph nodes considering she has no family history of cancer. Ms Tedenborg, who lives near Wodonga in Victoria with her partner Simon and who also has a three-year-old son, Charlie, gave birth to a healthy baby boy Eli at 36 weeks before undergoing chemotherapy, just days after her baby was allowed to go home.

Now, she is urging women to get their breasts checked after turning 40, also encouraging them to take life more slowly and look after their health by exercising and eating nutritious food.

“If you don’t have your health, nothing else matters.

“I really want to emphasise to people to get themselves checked after 40.

“I was going to get checked after Charlie was born but as I did not have it in the family, my doctor said you do not need it until after you’re 50,” she said. She believed that her illness was brought on by stress, working long hours, eating sporadically and neglecting her health.

“Obviously this situation has been quite confronting, you think “’ is it worth all the stress?” she said. “What I am trying to say is: ‘Look at the whole picture’.

“It was brought on by stress so what could I have done to change that?,” she said. Nine weeks since Eli was born, Ms Tedenborg already had three rounds of chemotherapy with one more due before an ultrasound in order to check if the cancerous lump had shrunk, which means there is no need for a mastectomy. Thankfully, she said that it has not gone into the bone or the other breast at that stage. “A little win in the darkness,” the mum-of-two said.

A GoFundMe page was set up to help the family pay for treatment. 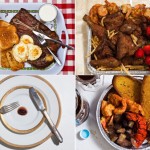 The Final Meals of Death… 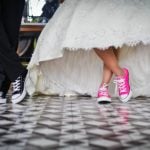