A mother has revealed how her first baby ‘broke’ her ‘vagina’ and what really happens after childbirth in a candid and hilarious blog post.

Mum, Zoe George has shared on her blog, The Subtle Mummy, that people had told her having a baby naturally was ‘life changing’ and it appears it was – in more ways than one.

“Let me tell you something: my first child broke my vagina and you don’t want to know what else, but I’m going to tell you anyway.

“Yup, it’s broken and I need a mechanic trained as a gynaecologist to fix it. Heads up to anyone reading this who is male or hasn’t had children yet, you may want to continue living in blissful ignorance and stop reading now,” she wrote in a blog post. Ms George, who is now mum to Ari, two, and Ambrosia, eight months, then said that she didn’t pay much attention to people talking about pregnancy or childbirth before she had children, but that has changed when she got pregnant. “People seem to think, and it’s not only women, that when you are pregnant you want to hear stories about sh*tting during labour and mucous plugs etc. Seriously, let me have a surprise,” she wrote.

“I remember being pregnant at a wedding and chatting to a friend who was due around the same time as me. Then a man, whose wife I had met five minutes earlier, came up and started rambling on about pooing during labour. MATE, seriously? How about you tell me I’m glowing first. I walked off, not because I was offended, but because I was just over it and in my last trimester,’ she wrote. She went on to describe her first experience of that mystery known as the pelvic floor. “Most people think that the pelvic floor is just your ‘love hole’ (honestly, that’s the nicest word I could think to call it). When you see your midwife or OB (if you’re fancy like that), they will run you through the exercises you should be doing to strengthen your pelvic floor.

“What they don’t tell you is that there are three pelvic floors. Your ‘pee hole’, your ‘love hole’ and your ‘exit only hole’ (let’s call it EOH). Thankfully (kinda), my first two were fine after the birth, but I had no idea of the surprise that was to come,” she wrote.

Ms George then went on to talk about an embarrassing incident that happened on the morning after she gave birth to her son. She said that some of her relatives and their partners were ‘randomly scattered’ around her quarter of the shared room she was in, and the unexpected happened.

“Everyone was happily chatting away and I was feeling thirsty so I poured myself a glass of water and slowly raised the glass to my mouth to have a sip. As the glass was nearing my lips, my EOH took it upon itself to start farting! I’m not talking a little brrrrt. This fart went for at least five seconds. I want you to count five seconds out now and realise how long that is.

“I had no idea what was happening, but I was 100 percent sure it was coming out of me. I was mortified,” she wrote.

However, she said that the issue didn’t stop even after she left the room in a rush.

“Lordy meeeee! I was walking down that corridor like someone had shoved a trumpet up my butt, let me tell you. I think I almost cried,” she wrote.

She then said that she went to the midwife to ask why her ‘EOH’ was broken and what she could do to fix it. She then said that the midwife explained: “This poor girl was trying, with her best serious face, to tell me it was my pelvic floor and it happens when you push a small melon out of you, seeing as you push as though you are taking the biggest crap of your life…Thankfully, it can be fixed, but it took me many butt clenches to return to my normal self,” she said.

Ms George ends her post with the words: “Thanks for reading. I hope you found it very educational. Seriously though, children are such a blessing and what we go through is nothing when you have the cutest little face making you smile every day.” 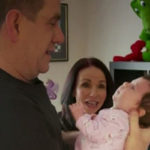 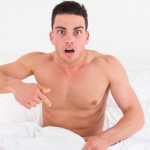