A six-year-old girl has penned an emotional letter asking for more awareness on disabilities after another girl called her brother with autism ‘weird’.

Mum, Sophie Camilleri was surprised one day when her daughter, Lexi, came home saying she wanted to make a change.

She later learned that another girl described her nine-year-old son, Frank, who has autism, ‘weird’.

Lexi then wrote a heartwarming letter, with a little help from her mother, where she said she felt ‘very sad’ at the other girl’s comment on her brother. She said she told the girl that Frank had autism, but the girl didn’t understand.

She addressed the letter to her school council in southern England, asking for more education on disabilities, hoping this would help other children treat everyone equally. She wrote:

“On Monday I felt very sad because a girl in my class said that my brother was weird. My brother has autism and is not weird.

“I would like it if we could learn about all disabilities in school so that everybody understands that some people are different, but we should all be treated the same.” Ms Camilleri has posted the photo on Facebook and had been shared more than 28,000 times. She said that Lexi has since handed the letter to school officials.

The London-based National Autistic Society also shared the letter on Facebook. “We think there should be much more autism understanding in the classroom which is why are encouraging all schools and nurseries around the country to sign up for our free autism resources,” the charity wrote. 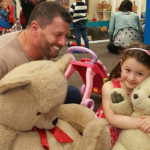