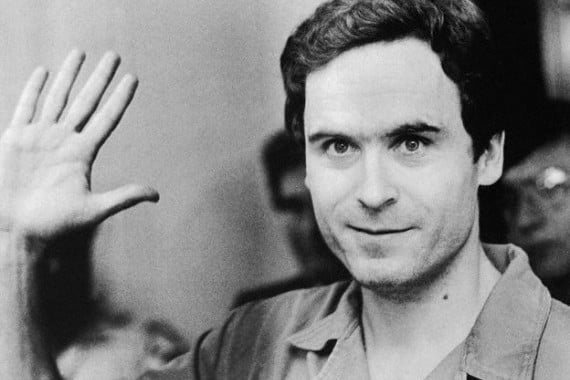 One of the most prolific serial killers in US history screamed his innocence right up to his death.

Described by some as a charming, intelligent and articulate man, Ted Bundy used these traits to get close to his unsuspecting victims. Theodore Robert Cowell was born November 24 1946 at the home for unwed mothers in Berlington Vermont, USA. He was born to 22 year old Eleanor Louise Cowell which brought much shame on her deeply religious parents. At the age of eight weeks, Louise and Ted returned to Eleanor’s parent’s home where a cover story was put in place to hide the scandal of the situation. Ted was raised as his Grandparents adopted child and Eleanor was to play the part of his older sister. In 1951 Eleanor and Ted moved to Washington where Eleanor married a military cook by the name of Johnnie Bundy. Ted grew up in what appeared to be any other normal working class family.  He was a well behaved child who was generally liked by his peers.

It is said that during his high school years Bundy suffered acute shyness which resulted in appearing socially awkward. Bundy, although having friends, never really got involved in social activities. He attended the University of Washington in his sophomore year studying psychology.

In 1967 Ted Bundy met the girl of his dreams. She had everything that he wanted, beauty, money, class and influence. Bundy grossly exaggerated his own accomplishments in an attempt to impress her during their relationship, but in 1968 she decided that he wasn’t husband material and lacked any real future. The relationship was ended by her and this led to his obsession with her that taunted him for many years to come.

Depressed, Ted Bundy dropped out of school. It was at this time he discovered the truth that his sister was in fact his mother and his parents were his actual grandparents. During this tumultuous time, Bundy’s shyness was replaced with a false bravado as he returned to college and successfully completed his Bachelors Degree in Psychology.

His life seemed to be going very successfully, he was active in social and political matters, even receiving a letter of recommendation from the Republican Governor of Washington after previously working on his campaign. Bundy was appointed to the Seattle Crime Prevention Committee by the Governor.

In 1974 women begun to go missing from college campuses around the Seattle and Oregon area.

In July of that year, two women were approaced by an attractive, dark haird man in a Seattle Park. He introduced himself as ‘Ted’ and asked if they could help him fix his sailboat. They refused. Two other young women were seen later that day walking away with him. They were never seen alive again.

Bundy enrolled in a law school at the University of Utah and moved to Salt Lake City.  Women started dissappearing from that area soon after.

Carol DaRonch was attacked by a man dressed as a police officer at a Utah Mall in the autumn of 1974. She managed to escape. A description was given to the police of his appearance, the VW he was driving and blood samples from her jacket that was there from the prior struggle with him.

A graveyard of bones was discovered by hikers in a Washington forest which were later identified as those of the missing women from Utah and Washington.

Authorities were able to identify the similarities of the women who were going missing. They were all white, thin, single, and had long hair that was parted down the middle.  Much like the woman that broke his heart and ended their relationship many years ago. Bundy was a good looking, charming, intelligent man who did not fit the commonly thought idea of a serial killer and rapist. He would often wear a fake cast or a sling on his arm, or even a fake leg cast. He would then ask his victims to help him carry things to his car or take things out of his car. Once they were in his car or leaning into the car, he would strike them violently across the head with a crowbar or pipe, and handcuff them so they were immobilised.

Caryn Campbell vanished from a ski resort in Colorado on January 12, 1975. She was discovered brutally murdered one month later. Her naked body was found a short distance from the road. Her remains were examined and it was found that she had received violent blows to her skull possibly from being hit with a crowbar. Five other women were found dead in Colorado with similar contusions to the head.

In 1975 police attempted to stop Bundy for a traffic violation but their suspicions were aroused when he tried to evade them by turning his lights off and speeding away. When he was finally stopped by police, his VW car was searched. Police found an ice pick, crowbar, handcuffs, and pantyhose with eyes cut out of them amongst other questionable items. It was also noted the front passenger seat of his vehicle was also missing. Police arrested Bundy on suspicion of burglary.

When the items found in Bundy’s car were compared to the police report from DaRonch’s attack the previous year, Police were confident that they had in custody, the person responsible for the murderous spree that had been occurring for the previous year across three states. Bundy was picked out of a lineup by DaRonch and police now felt they had enough evidence to charge him with her attempted kidnapping.

Bundy went to trial and waiving his right to a trial jury he was found guilty of attempted kidnapping of DaRonch and sentenced to 15 years in prison. Police were now following up on leads and investigating links between Bundy and the other victims. Credit card statements put Bundy in the Colorado area where the women vanished from.

Bundy was charged with Caryn Campbell’s murder in 1976.

Serving as his own lawyer, he appeared in court without leg irons and was able to move between the courtroom and law library which were both in the courthouse. In June 1977, during a pre-tirial hearing Bundy escaped by jumping out of the window of the law library. He was captured a week later.

In December 1977, Bundy again escaped his confinement, climbing out of a hole he had made in the ceiling of his cell. His disappearance wasn’t discovered for 15 hours giving him a head start on the police, where he travelled to Tallahassee, Florida and resumed life under a false identity.

On the night of January 14, 1978, Ted Bundy broke into a sorority house at the Florida State University. He attacked four young women, bludgeoning and strangling to death two of them. He raped one of the women, and brutally bit her on the buttocks and one nipple leaving a very distinct shape on her skin. The other two were spared their lives due to Bundy being interuppted by another student coming back into the dorm. He was witnessed leaving.

On February 9 Bundy kidnapped and mutilated a 12 year old girl Kimberley Leach. Within a week Bundy was arrested for driving a stolen vehicle. Eyewitnesses could place Bundy at the dorm where the women were attacked and murdered as well as at Kimberley’s school. Physical evidence was also available linking him to the three murders including a mould from the bite mark on the flesh of the sorority house victim.

Bundy turned down a plea bargain for the crimes where he would please guilty and in exchange receive three 25 year sentences.He went on trial on June 25 1979 for the murders of the two sorority women, again acting as his own attorney. He was found guilty on both charges and sentenced to two deaths sentences by means of the electric chair.

January 7 1980, Bundy went on trial for the murder of Kimberley Leach. His attorneys that were appointed used the insanity plea as the evidence was stacked up against him. A guilty verdict was returned and a third death sentence was received.

Prior to being put to death, after many years of declaring his innocence, Bundy confessed to the murders of over 30 women. It is believed though this number may in fact be closer to 100. He had displayed their lopped heads in his apartment and engaged in sexual acts with the deceased bodies of his victims.

January 24, 1989 crowds cheered and even set off fireworks outside the Florida State Prison. At 7.13amTheodore Bundy had been executed for his crimes. She will be forever known as The Girl Who Hid in Stephanie Scott was well known, loved, and respected in the town Not everyone is blessed with a wonderful mother-in-law. Sometimes they get If you think that paedophiles are all old men that hang