Belle Gunness was truly the world’s first and original Black Widow.  With over 30 kills to her name (maybe more…), nobody knows if she really did get away with murder! Would you answer this advertisement in the local paper? 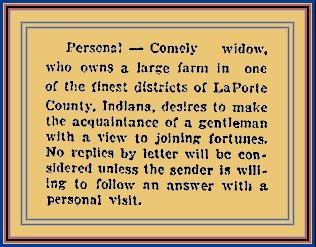 Well, in 1907, several men did. Unbeknownst to them, it was to be a fatal mistake!

The ad was placed by Belle Gunness, a Norwegian-born American who stood 183cm tall and weighed just on 100kg. She was the first real Black Widow – and is thought to have killed over 30 people, including her own children.

Belle was born Brynhild Paulsdatter Storset in Innbygda, Norway.  There is an unconfirmed story that, as a teenager, she had fallen pregnant in Norway.  Early in her pregnancy, she attended a local dance in Norway, and for some unknown reason, was attacked by a man who kicked her in the abdomen causing Belle to miscarry the child.  The man was apparently from a very rich family and mysteriously was never prosecuted by Norwegian investigators.  According to sources, after this incident, Belle was never ‘mentally’ the same again.  The man who attacked her suddenly died a short time later, reportedly from stomach cancer, but many think that this man was Belle’s first kill.  Belle then went into service on a local nearby farm, and saved enough money to travel to America.

After emigrating to America in 1881 at age 21, she ‘Americanised’ her name to ‘Belle’, married and opened a confectionery store with her new husband, Mads Sorenson, but the business was extremely unsuccessful and then burnt down just a year later. Insurance was collected on the destroyed business and a new home was purchased. It was around this time that Belle, or The Black Widow as she was later known, started her serial killing spree.

The marriage to Sorenson produced four children – Caroline, Axel, Myrtle and Lucy. Caroline and Axel died in infancy, reportedly of acute colitis, which was a common way for children to die at that time; but as the symptoms for colitis are very similar to poisoning (nausea, fever, vomiting and abdominal pain/cramping) many question this diagnosis. Both babies lives were insured and the insurance company paid out.

Belle’s other children, Myrtle and Lucy were killed in a fire at their home. Belle also had a foster daughter, Jennie Olsen, who stayed with her until 1906.  Belle was paid money from the government to look after Jennie.  But she mysteriously disappeared. Belle told people she been sent to finishing school, but her body would later be found buried on Belle’s property.

Mads Sorenson died on July 30th, 1900, coincidentally on the only day where two life insurance policies on him overlapped. The first doctor to see him diagnosed strychnine poisoning, however, his personal family doctor disclosed he had been treating Sorenson for an enlarged heart, and concluded that death had been caused by heart failure. Belle applied for the insurance money the day after the funeral. Despite calls from Sorenson’s family to investigate further, no further action was taken.

Belle was now a very wealthy woman.  With the three cashed-in insurance policies – she moved from Chicago to La Porte, Indiana and bought a 42 acre farm. Shortly after, Belle met the local butcher, Peter Gunness, a single father of two girls.  Belle married Gunness in April 1902. Just one week after the wedding ceremony, Peter’s infant daughter from a previous marriage died of unknown causes whilst alone in the house with Belle. Just 7 months after they married, Peter himself met an untimely end when he was scalded with brine on the stove, then a sausage-grinding machine supposedly fell from a high shelf and hit him in the head, causing a fatal head injury. A year later, Peter’s brother Gust came and took Peter’s older daughter to live elsewhere. She is the only child to have survived living with Belle.

The Scams Progress to Murder

After Peter’s death, a pregnant Belle began advertising in a paper called ‘The Norwegian’  as a means to meet eligible and rich men. Several men responded to her ads and all of them disappeared.

A letter later found at Belle’s property to one of the many gentlemen reads:

“Change all the cash you have into paper bills, and sew them real good and fast on the insider of your underwear.  Be careful and set it real good, and be sure do not tell anyone of it, not even to your nearest relative.  Let this only be a secret between us two and no one else.

Probably we will have many more secrets, do you not think so?

John Moe was one of the first gentleman to visit Belle.  He disappeared after one week.  Another was George Anderson.  George had mentioned to relatives that he met someone and was planning on paying out her mortgage and marrying Belle.  Smartly, he refused to give Belle any money until they were married.  He was lucky that he escaped before Belle could kill him.

An exception to her rule for killing suitors was Ray Lamphere, probably because he had no money and subsequently, nothing for Belle to benefit from his death. However the farm required a lot of work, so Lamphere became her farm hand.  Later he became Belle’s friend and lover and helped her dispose of the bodies of her suitors, but when she fired him in 1908, he threatened her and she served him with a restraining order.  A man called Joe Maxim took over from Ray.

It was at this time that Belle started to order huge trunks to be delivered to her home, the weight of these large boxes not being an issue for such a large and strong woman. She kept the shutters and doors of her home closed day and night and kept very much to herself. Farmers driving past her home at night saw her digging in the hog pen.

In late 1907 or early 1908, Belle met and became engaged to Andrew Helgelein. When he failed to contact his brother for several weeks, Asle Helgelein sent word he would be coming to the Gunness farm to visit.

A huge fire broke out at the farm house on the night before Asle’s arrival, allegedly killing Belle and her children. Joe Maxim, Belle’s farm hand raised the alarm and escaped the fire. The body found that was reported to be Belle’s however, was too small to be hers, and, in an attempt to not identify it, the head had been removed! Ray Lamphere was arrested for arson and murder.

Against the ruling of the sheriffs office, Asle went digging at the property site and in the pig pen, only to find the decomposing body of his brother and several other bodies also. All the bodies, including those of her three children were cut up and wrapped in oil cloth. It’s estimated that over 30 bodies were found in the grounds around the farmhouse.

On his death bed, Lamphere her former farm hand and lover confessed that the headless body found in the basement of the house after the fire was not that of Belle Gunness, but of a housemaid she had employed days before. He admitted to taking her to a small nearby town, where she took a train to Chicago. He then returned to the farmhouse and set the fire, unaware of the dead bodies in the basement. He professed to always love her and admitted his involvement in disposing of bodies and helping her fake her own death, but not of doing any of the killing.

Police sent off some of the remains of the bodies found to scientists that found that their bodies all contained strychnine, a poison that quickly kills when it enters the bloodstream.

Theories About What Happened to Belle Gunness

There are theories that Belle went to Los Angeles and changed her name to Esther Carlson, who had the same build, was the same age as Belle and had a striking resemblance to the murderess.  Carlson said that she had no children, but a photograph of three children was found in one of Esther’s trunks.  Witnesses reported that the children looked a lot like Gunness’ three foster children.

Mysteriously, there was no record of an Esther Carson before 1908.

If Esther Carlson wasn’t Belle Gunness, then she was certainly a serial killer herself.  Her first husband Charles Hanson drowned nine months after they married due to an illness that suspiciously looked a lot like poisoning.  Another man living in her house, Gustav Ahlzen died by committing suicide after swallowing a bottle of strychnine.  To top it off, her husband’s close friend August Lindstrom died suddenly in 1931 and was found with enough arsenic in his body to kill 40 people.

Esther died from tuberculosis whilst on trial for the killing of her husband.

In 2007 a University exhumed the body of Belle Gunness (the original body at the farm house) and there was a combination of adults and children’s bones together in the coffin.  However, they were not Belle’s other children as their buried bodies were all intact.  No one knows whose bones they were.

It is estimated that Belle Gunness collected over $30,000 as a result of the murders of her suitors, husbands and children. This equates to just under $770,000 in today’s currency. Belle was never caught or arrested for the murders and her whereabouts and fate after the fire are unknown. Her death is listed as April 1908 as that was the last time she was officially seen alive, however after Lamphere’s confession, many sightings were reported but never confirmed.

We can’t help but wonder what really happened to Belle Gunness in the end! 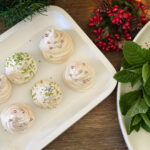 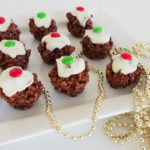 Do you celebrate invasion day ?
Answered 5 hours ago
Is your partner a dribbler or a shooter?
Answered 14 hours ago
5 Types of Worms Children Can Get And How to Treat Them
Asked 1 day ago
65 TV Series You Must Watch Before You Die
Asked 1 day ago