Have you ever altered your personality or pretended to enjoy hobbies that you didn't just to get a guy to fall in love with you?

Centrelink fraud , could my partner be charged for his ex’s wrong doings

Have you ever had to deal with a bridezilla, or know of one? Tell us your stories 🧖‍♀️

If you have seen the movie ‘The Sixth Sense’, you would have a pretty good idea what Munchausen Syndrome by Proxy is.

But if you haven’t seen it (or have forgotten) – you won’t forget once I’ve told you.

It is a rare psychological condition where a parent or carer deliberately makes their children sick to that they can ‘gain attention’ from friends, family, and medical staff.  In most cases of Munchausen Syndrome by Proxy, it is the female caregiver or Mum, that is the perpetrator.  These days the medical fraternity can pick up these types of cases, but years ago, it wasn’t even fathomable that a parent could do this to a child.

This, being one of the most unbelievable cases of Munchausen Syndrome by Proxy, is a case of a 23-year-old mother who not only gave false information to authorities regarding the illnesses of her children, but also went an extra mile to make sure that the tests doctors performed on her children turn true. In this bizarre case, Blanca Montano infected her children with fecal matter and bacteria. Her sentence of thirteen years started in 2011 when she was caught red-handed.

Bianca’s 2 children had positive results of E. Coli which is a very dangerous bacteria found in fecal matter. Once the results of these bacteria appeared, the oldest child, a son, went on to heal normally. However, the daughter did not have the same luck as she continued to deteriorate. The continued stay in hospital had doctors find additional bacteria in her blood, which led them to believe that this was a MSBP case. After installation of cameras in the daughter’s hospital room, they had Blanca on tape contaminating her daughter’s IV. Once the mother stopped visiting the hospital, her daughter recovered.

It is believed that Blanca deliberately poisoned her children to gain attention from the father of her children, and to entice him to come back to her.

Lacey Spears is a Mummy Blogger in the United States who horrifically killed her five-year-old son, Garnett, by injecting her son with salt. Spears took her time poisoning her son, whilst asking her followers for donations and any other kind of support from her online friends. Her son, Garnett, died in the hospital due to Sodium poisoning.  Prosecutors on the case likened the poisoning to ‘torture’. Lacey continuously fed her son with high doses of salt through the tube meant to feed him food. Her son was hospitalized in January 2014 for unexplained sodium levels in his blood. Because of the continuous salt injection, the boy died a few days later.

The Mummy Blogger hadn’t just started injecting her son with salt, she had been doing it for years, putting her son through unnecessary surgical procedures and hospitalisations.  Spears had taken her son up to twenty-five different medical facilities over the years regarding his illness.  Five months after her son’s death, she surrendered to the Police. She is serving 25 years to life in prison.

Spears admitted to poisoning her son for Facebook glory.

Lacey Spears with her son Garnett (Image via ABCGo.com)

This is a bizarre and abnormal case of Munchausen Syndrome by Proxy. Leslie Wilfred had formerly been divorced and was now re-married.  She had four beautiful children with her first husband and had then decided to have her tubes tied.  Chris had come to the new marriage with a step-son, Nathan.  Leslie seemed to resent Nathan’s existence and wouldn’t let him participate in family outings or events. Leslie claimed that Nathan was violent.

There was one thing Leslie failed to tell her new husband.  She had had her tubes tied. All of a sudden, Leslie was pregnant – with twins.  Her husband and family were ecstatic.  Even fawning over her ultrasound pictures of the twins.  What she didn’t tell anyone was – the pregnancy was all a farce!  Five months into her ‘pregnancy’ Leslie called her husband to let him know that the twins had been born prematurely and died at birth.  She had apparently already cremated the bodies and placed them in beautiful Teddy Bear urns.  Leslie was now planning the funeral for her family to mourn the twins passing.

Child Protective Services had visited the Wilfred home as Chris’s stepson Nathan had apparently threatened the family with a knife and the incident had been reported. Leslie was required to meet with officials to speak about how Nathan’s actions had affected the family, and she said, the health of her unborn twins.

However, when CPS looked into Leslie further, they found that there was no record of her pregnancy. Her other children seemed to all be sick and in and out of hospital their whole lives. Leslie Wilfred, for whatever reason she had, faked her pregnancy and was poisoning her children. The investigations into this case led to the discovery of more than the fake pregnancy. Leslie had other children, Teresa, who she claimed was dying of Leukaemia, Charles, who she claimed needed a liver transplant. All these were false.  The most abhorrent of them all was that Leslie had been making Nathan sleep in a wooden box in the bathroom at night.

Leslie pleaded guilty to several counts of child cruelty and is serving an eight-year sentence followed by 30 years of probation. Her new husband Chris was also charged with child cruelty. They are not able to contact their children without permission from the court.

Leslie Wilfred with her new husband Chris, and four children from a former relationship.

Marybeth Tinning is a murderous mother who killed her babies.  Nine babies in fact.  Although she has only been convicted of the murder of her ninth child.  The killings started in 1971 with the death of Marybeth’s third child, Jennifer.  Jennifer appeared to have died from hemorrhagic meningitis.  A mere 17 days later, her two-year-old son Joseph was rushed to hospital before dying of cardiopulmonary arrest.  A few weeks later, her daughter Barbara had convulsions and died.  Doctors thought her death was due to Reye Syndrome (an unknown viral infection causing seizures).

Marybeth’s other children died shortly after birth.  Doctors advised Marybeth that the children had all inherited an unknown genetic disposition that caused their early untimely deaths.  But when her adopted son Michael died after ‘falling down the stairs’, the Department of Social Services investigated Marybeth and found her guilty of smothering her children.

Marybeth received a jail sentence of 20 years to life in prison and she is currently incarcerated at the Bedford Hills Correctional Facility for Women.

This is a rarer case of Munchausen Syndrome by Proxy as it wasn’t a mother, but a nurse who killed innocent babies who were sick and in her care. a case of a mother. It is, however, a case of a nurse, Beverly Allitt, who had four children die while she cared for them.

Beverly starting killing babies in 1991.  Her first victim was seven month old Liam Taylor who was admitted to hospital with a chest infection.  Allitt had assured his worried parents that he was in very capable hands.  She encouraged his parents to go home and get some rest whilst she looked over him.  Not long after his parents had left, Liam had a cardiac arrest.  Despite medical intervention, Liam had suffered brain damage and subsequently died.  Two weeks later 11-year-old Timothy Hardwick was admitted.  He suffered from cerebral palsy and had been having multiple epileptic fits.  During a period of being alone with her patient, she called for emergency resuscitation.  Timothy was found in bed without a pulse. A subsequent autopsy did not show his cause of death.

Another 11 cases of death or almost death occurred before the hospital got suspicious. An investigation by a hospital consultant took place, findings led authorities to believe that the children had a certain drug injected in them, which caused the deaths.

She was sentenced to a minimum of thirty years in a psychiatric institution.

Jennifer Bush spent the first nine years of her life in and out of the hospital.  Jennifer had an unusual series of diseases that led to over one hundred and fifty hospital visits that involved more than thirty-five medical procedures.  However, the nurses who took care of Jennifer suspected that her mother, Kathy Bush, to be the cause of her daughter’s illness.  They suspected that Kathy was giving Jennifer extended doses of medication that would make her ill.  Kathy Bush lobbied the government to assist her with the cost of her daughters health care as well as instigating changes to the health care system.

Authorities removed Jennifer from Kathy’s care, and Jennifer was placed into foster care where her health improved.

Kathy was charged with aggravated child-abuse and was imprisoned for three years.  She was released in June 2005.  Jennifer remained in foster care until her 18th birthday.

The two have now repaired their broken relationship and live close to each other in Georgia, US.  Jennifer has publicly stated that she never thought her mother deliberately made her sick.  Kathy has denied allegations of Munchausen Syndrome by Proxy.

Angela is a mother of four children, three of whom died of Sudden Infant Death Syndrome. In 2002 Angela was convicted for the murder of her seven-week-old son Jason, and her 18-week old son Matthew who died in 1999. She had also given birth to a daughter, Gemma in 1989, however, she was not convicted of murdering her daughter.

The BBC investigated the incidents and the case was re-examined.  It was found that Angela’s paternal great-grandmother had suffered a sudden infant death, and her paternal grandmother two deaths.  A clinical geneticist at St George’s Hospital Medical School concluded that the probable cause of the children’s deaths with genetic inheritance rather than smothering as she had been charged with.

Angela Cannings has no relationship with her surviving daughter, Jade, who stated that their relationship deteriorated due to her mother’s long stay in prison and for not providing her with financial assistance after Angela received a huge compensation award after being released from prison.

There is another case worth mentioning which is the story of Gypsy Rose Blanchard – it is incredibly involved and we have featured this story in a separate article, if you’d like to read it here. 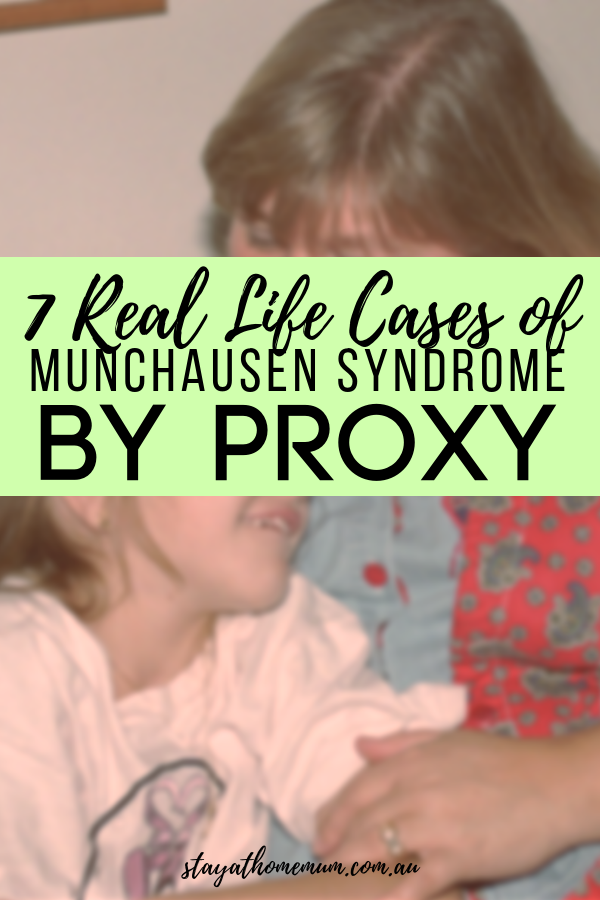