As if there weren’t enough reasons to love these guys – but here’s one more: the Wiggles have shown their support for 21-year-old Down syndrome man James Milne who was recently discriminated against at a JB Hi-Fi store.

The young man, who is a huge Wiggles fan, is at the centre of social media outcry after his sister, Victoria, posted her disgust on Facebook about her brother’s refusal to be let into the Mt.Ommaney JB Hi-Fi store based on his appearance. He was allegedly mistaken for looking like another customer who had been banned from the store, but when James’ father, who was accompanying him, pointed out that the picture they were using to identify him looked nothing like him – the manager told him “They all look the same” and refused his entry.
Victioria’s post has gone viral, and James has gained the support of thousands online including his favourite colourful TV characters, The Wiggles.

The Wiggles posted to their Facebook page late yesterday afternoon, gaining thousands of likes and shares when they offered free tickets for James to see their show when they return to Australia:

The Wiggles: G’day everyone. We’ve received quite a few comments regarding a young man named James who has Down Syndrome and is a big Wiggles fan.

The Wiggles have many fans of all ages and with additional needs. They are a part of our community. We are sorry to hear of James’ experience and so have reached out to invite him and his family to meet The Wiggles when they return to Australia and have offered tickets to see our Big Show. 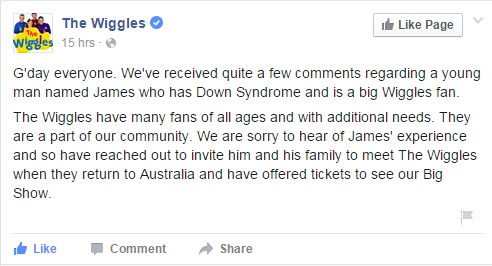 It seems while some people in positions of power get it drastically wrong, at least some of the people influencing our young children the most are spreading the right message.
Keep up the good work Wiggles! Acceptance for all.