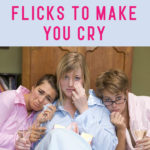 Who can forget these chick flicks that made you cry?

Your other half has gone out for the evening, the kids are asleep, there’s a huge bar of chocolate waiting to be cracked open, and you’ve got your comfy pants on.

Now for a good chick flick, but which one? Sometimes, we just need to put on an easy watch – one of those classic romantic movies you’ve seen a million times – and prepare ourselves for a good cry. Here is a countdown of our favourite chick flicks to make you cry and that are bound to make you grab those tissues and cry buckets.

Now this is fantastic classic romcom. Released in 1989 (that’s going to make you feel old), a whole host of great names are featured in this tale of friendship including Julia Roberts, Sally Field, Dolly (huge boobs, huge voice) Parton, Shirley MacLaine, and Daryl Hannah. Full of love, tragedy, heartbreak, and drama, this movie is guaranteed to make you laugh and cry.

Owen Wilson and Jennifer Aniston star in this lovely story about a couple who take on a rambunctious and lively Labrador, just as they start their married life together. The flick captivates you as it takes you on their winding journey with Marley as they grow older. A fantastic watch, funny and a huge tearjerker.

If you have a few hours to kill then why not pop on the blockbuster, Titanic? Maybe not your typical chick flick but one nonetheless. The special effects and historical narrative are fantastic, but it’s the tragic love story between a busty Kate Winslet and a youthful Leonardo DiCaprio that will hook you in. If this one doesn’t make you cry like a baby, then you must have a heart colder than an iceberg in the North Atlantic.

The fact that this one is based on a true story makes it even more emotional to watch. Starring Sandra Bullock, who proves that she really can act, it tells the story of a privileged family who adopted a homeless boy. With their support, and against all the odds, he goes on to become an American football star.

If you are looking for a movie that is a tearjerker and stars a really hot guy, then look no further than Dear John as the main character is played by Mr Hot-Stuff himself, Channing Tatum – oh my, oh my. The movie tells the story of a soldier and a rich beauty who instantly fall in love, but the long distance puts their relationship on ice. It’s an easy-to-watch chick flick with lots of gorgeous people.

Another DiCaprio movie and yet another tearjerker. If you don’t know the story, then shame on you. This tragic love story is made remarkably emotional by its epic soundtrack that will make you sob your heart out.

A Christmas classic that is incredibly moving and one that you can watch again and again. Starring James Stewart, and released back in 1947, it tells the story of a suicidal businessman who is shown what life would be like if he had never existed. It will have you blubbering by the end and make you feel all warm and fuzzy inside.

Of course, Beaches had to make the list! A story about best friends, their ups and downs, and their relationships with men. If you’ve never seen it – watch it. Warning: you’ll need a big box of tissues by your side for this one.

This film is about an angel, played by Nicolas Cage, and a doctor, Meg Ryan, who meet and fall in love. But of course, he has to become a human for them to live their happily ever after. Another great movie and a great soundtrack that manages to intensify the tears to an embarrassing level.

Bet you aren’t surprised that this is our number one. This film will have you crying uncontrollably; the kind of crying where your mouth is wide open, but there is no sound. Don’t watch this one with your other half though or you’ll be on the receiving end of some disbelieving stares as you descend into a sobbing mess. Starring the ridiculously gorgeous Mr Ryan Gosling and the lovely Rachel McAdams, this movie is a gorgeous love story with a fantastic twist in the plotline. But then you know that already because you’ve watched it a hundred times like the rest of us.

Did we miss anything? What’s your favourite tearjerker? Finish your schooling years with a bang!!!

50+ Best Things To Do in Queensland

Travelling to the Sunshine State - Here are the Best Places to Go!