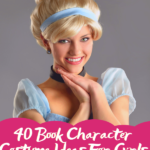 Who’s excited for book week? Because I’m not!!!

The preparation part? NOT. The kids would whine whenever I pick something for them yet they have NO IDEA WHAT THEY WANT!

Still, we do our best because that’s what parents do. What mums do! That happy face my kids make still makes me want to exert effort into helping them choose their costumes and this would be a lasting memory. Book week is a once-in-a-year event so let’s give it our best shot!

Every year, we make sure we make a list of costume ideas for the book week. We’re sharing with you some ideas for your girls on what book character they can go as for this year’s book week!

If there’s one person who’s so obsessed with gums, that would be Violet Beauregarde. She’s even the champion in the field (yes, she said that).

Cowgirl is about how two young girls try to save the cows in their community. It’s plain and simple, but this is a good read because it teaches that one simple act of kindness can give a huge impact to the society. When they saved the cow, they made the people in their community much more connected to each other.

The love story of Ariel and the prince tells us a lot of things. First, there are times we have to let go of a part of ourselves just to be with someone we cherish. Second, even if our brain forgets, we will always hold within ourselves the memories we put in our hearts.

Peter Pan perhaps is one of the children stories that’s very known all over the world. Dreams, even if seemingly unreachable, can still come true. It teaches us that we should think positive and don’t lose hope.

Who doesn’t know the story of the Beauty and the Beast? Belle teaches us that if only we choose to see the good in people, we’ll be able to see the beautiful things that lie within their hearts, no matter how they look like.

The story of Pippi Longstocking is all about loving and being aware of yourself. She has her own way of doing things and she isn’t afraid to be judged for it. She also has a soft heart for the animals and the orphans, making her a good character for kids to look up to.

Not one kid wouldn’t know Cinderella. This story book is a classic and probably on the top of everyone’s favourite fairytales!

Cruella de Vil is the main antagonist in the 101 Dalmatians. One thing that you can get from her is her ‘who cares’ mindset.

The sleeping beauty is a fun story with all the fairies and princesses. It teaches us that only the right person can awaken some parts of ourselves we didn’t know were even there.

In Snow White’s story, the Queen’s jealousy was where it went wrong. Even if Snow White got poisoned, isn’t it nice to have dwarf and animal friends?

Between the Goldstein sisters, Tina is the serious one. She’s fearless and practical and always on the right side of things.

Mary Poppins is a sassy girl who doesn’t envy nor hate. She loves sharing her wisdom to other people and be of help in case of emergencies. She’s also friendly and has a heart for the people.

The highlight of the book Matilda isn’t actually Matilda’s laser eyes or her being gifted but her genuine and innocent heart.

Miss Trunchbull is the worst. Many people are scared of her because she’s cruel, wicked, and muscular.  Love her or hate her but we can’t ever forget her!

The story of the BFG is inspiring because it shows us that we shouldn’t judge the book by its cover. Just because they look strange, harmful, or even bigger than everyone else doesn’t mean that they have bad intentions.

Fern has a huge heart for the animals. She fights for them even if she has to go against her father. She has a tender heart and she loves her pig Wilbur so much. She even treats him as her baby, dressing him up and feeding him from a bottle.

Alice is a nice, curious, and intelligent girl who shows us that kindness always wins.

20. Elphaba, the Wicked Witch of the West (The Wonderful Wizard of Oz)

Elphaba is described as isolated, dark, manipulative, and power-hungry, as well as an old woman having three pigtails and one eye.

This brat always wants to get what she wants.

22. Glinda, the Good Witch of the South (The Wonderful Wizard of Oz)

Glinda has been beside Dorothy from the very moment she set foot in Oz. She’s kind, thus the title, and always wants to protect the people.

Queenie, on the other hand, is also fearless and nice but she’s quite sassy and has girly fashion sense. She can read minds and can know other people’s emotions. She’s sweet.

Want to portray someone brave? Then be Katniss Everdeen!

Lola is just like the typical younger sister who’s naughty, somewhat stubborn, and selfish. The story of Charlie and Lola tells people to be patient with their younger siblings.

Bellatrix is somewhat a paranoid witch that is loyal to Lord Voldemort. Yep, she’s one of the Death Eaters. She’s described as tall and beautiful in the book. Other than that, I don’t have anything good to say about her.

Luna is weird. She’s not the one you’ll want to befriend at school. But if only you accept her as she is, you’ll know that she’s actually nice and has a funny personality!

28. Dorothy (The Wonderful Wizard of Oz)

Dorothy, the one with the red shoes. The Wonderful Wizard of Oz holds a lot of meaningful values, and those aren’t just from Dorothy herself, but also from the scarecrow, the tin man, and the lion as those three represent three important things in life, which are the ability to have good sense of judgment, the privilege to feel emotions, and the courage to take risks.

Alberta is like the stepmother in Cinderella’s story. She’s horrible and assumes she has the right to own what’s intended for Stella, her niece and the protagonist. She’s indeed awful.

Angelina is a mouse who loves dancing. One important value that everyone can get from her story is the importance of being dedicated. That is, if you keep on working towards your goals, you’ll achieve them.

31. The Queen of Hearts (Alice in Wonderland)

The Queen of Hearts might be terrible, but if you knew her story, you’ll know that there’s a reason why she became like that. Our past really shapes our future. You’ll learn from what she’s become that bad people were once good people, and that how people are raised has a huge impact to what they’ll become.

Fancy Nancy is a perfect book for kids to read. Nancy, as she deals with lots of circumstances, learns things, mostly relating to relationships with other people, that are vital to becoming a good person with a pure heart.

Even the smallest of things can shine. Just look at Tinkerbell.

We relate sunshine to happiness because it’s bright, making the gloomy atmosphere cheerful. That’s also what you’ll learn about Little Miss Sunshine when you read the book.

The story of the Little Red Riding Hood is funny because, well, how can anyone not notice a fox? Regardless, the main lesson of the story is that you shouldn’t trust strangers!

The story of Olivia is mostly focusing on arts, like dancing, architecture, fashion designing, and many others. But she has a charming personality that anyone would love. She is creative, confident, and productive.

Witches are often portrayed as bad people but in the Room on the Broom, the witch is actually good and she’s even friends with animals!

It’s okay to be curious and to satisfy your curiosity by filling yourself with knowledge even other people find strange and weird. Nancy Drew is fearless, grounded, and loves mysteries!

Of course, the overly intelligent Hermione Granger who is just so right for the theme of the book week this year! Such a bookish wizard who makes Harry and Ron feel like an idiot!

Whatever you encounter in life doesn’t define who you are. It’s how you deal with it that matters. Aladdin teaches us that we are greater than any situation.

Which of these book character costume ideas for girls have you picked for your sweet little girl?