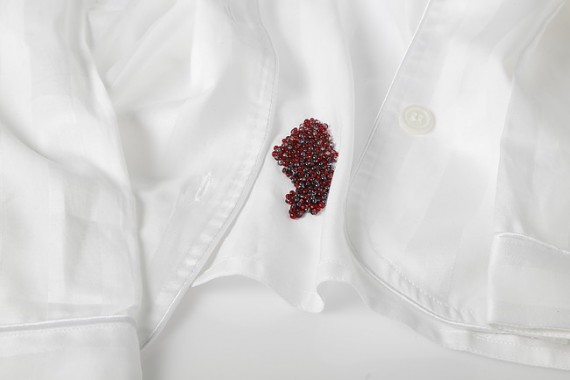 Ladies, be proud of your period and wear it as a badge of honour! Or at the very least a brooch.

A 22-year-old jewellery designer from London, Lili Murphy-Johnson, has created a range of jewellery inspired by period blood to encourage women to feel no shame or stigma around their monthly cycle. Her collection includes rings in brilliant red hues, as well as one that looks a bit like a sanitary napkin. Her brooches are designed to look like period leaks when attached to clothing and look particularly striking on white.

She also has a range of gold pieces including a charm bracelet that features miniature tampons, IUDs and boxes of pads. “Periods are stigmatized in our culture from a long history of superstition and inequality for women. There is an interesting conflict with the perception of the female body, being seen as so perfect, yet also as so grotesque and unclean. Drug stores are oversaturated with products to manage periods, all playing up to the idea that periods are dirty and something wrong with the body, something to hide.

My collection is inspired by menstruation, and the frustrating, leaking female body. Comprising of three prominent stages of menstruation, my collection focuses on the hormonal mood swings that makes up premenstrual syndrome, commonly known as PMS; the ‘periods paraphernalia’ being tampons, sanitary towels, soaps, wipes, and the many products that are provided to women to help manage their periods; and lastly, the blood itself.”

Menstruation is a biological function that most women have to deal with, but has become depicted in the mainstream as something dirty and disgusting and shameful. From the advertisers of sanitary products telling us that our periods are problematic to Instagram banning photos of period blood being published, while being okay with nudity, it’s clear that society still regards menstruation as a taboo topic. And let’s not forget that if a woman is upset about something, a common insult to fling at her is to suggest she’s got her period.

Lili is part of a growing trend of women campaigning to end menstruation shaming. Last year, artists Rupi and Prabh Kaur posted a photo series on Instagram, meant to demystify periods. They were taken down from the site twice for violating guidelines, even though there were no written guidelines in place that they violated.

Another woman, Kiran Gandhi, got her period the day before the London Marathon which she had spent months preparing for. She decided to go without a tampon and bleed freely and caused a stir when photos of her running the marathon with blood clearly visible between her legs. She later said she did it to draw attention to the absurdity of the fact half the population is expected to keep this normal bodily function hidden away, as well as to highlight that many women don’t have reliable access to tampons or sanitary pads.

Who knows, maybe one day, periods won’t be such a big deal?  In the meantime, if you want to buy some of Lili’s period-inspired bling, it will set you back between $52 to $1743 AUD.

Would you wear period-inspired jewellery?

All images are from lili-mj.com. Grandmother Warns About Dangers of…