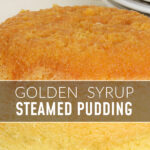 Golden Syrup Steamed Pudding is my all time favourite dessert.

I’ve been eating this particular recipe for Golden Syrup Steamed Pudding since I was young and I hope to pass it on to my boys for them to make for their families one day.  Serve it with ice cream or cream!

If you remember your Grandmother’s Golden Syrup Steamed Pudding – then get excited – because this is a Traditional recipe – one that my own Grandmother used to make – and it is so buttery and delicious – there just cannot be a better recipe anywhere.  Best of all – it only contains basic ingredients – nothing fancy.  You will most definately already have the ingredients ready to go in your fridge and pantry right now.

Don’t be stingy on the Golden Syrup either – I always add two, sometimes three times the amount of syrup.  If you aren’t a huge fan of golden syrup (we can’t be friends) – you can have jam instead!

Serve the Golden Syrup Steamed Pudding with vanilla ice cream or double cream.  You can also make some home made custard if you like!

Golden Syrup Steamed Pudding is best made in one of those traditional Pudding steamers – but you can use a large noodle bowl as long as you keep an eye on the water level!

Other great pudding recipes we have for you to try include: Please Note Nutritional information is provided as a guide only and may not be accurate.

Nutritional information does not include the following ingredients:

GET 50% OFF THE FIRST 3 MONTHS ON SELECT PLANS.

How to Make Traditional Steamed Pudding:

You can also make this in the microwave, use the above directions, but place the mixture in a microwave-proof container (preferably a ring cake microwave dish) - cover with plastic wrap and microwave for 7 minutes.