What have I got to do to get regular sex?
Answered 35 minutes ago
Pee in shower?
Answered 38 minutes ago
I cannot afford the mortgage
Answered 4 hours ago
How much older is too much?
Answered 1 day ago 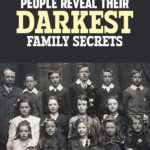 Every clan seems to have that dark family secret that nearly everyone knows, but just isn’t spoken about.

If there are any secrets in my family I sure don’t know about them – maybe having a boring family tree is a good thing. But these are somewhat incredible.

It makes you wonder what people really know about their family and they aren’t sharing…. To be a fly on the wall when some of these conversations went down. 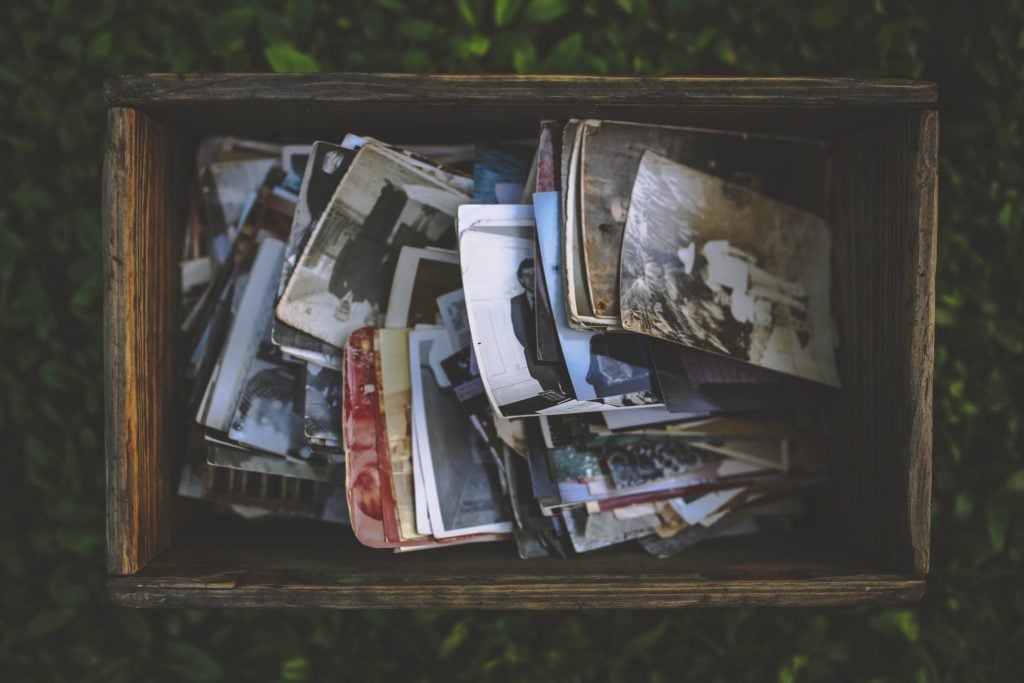 Keeping it all in the family….

“My Dad was born when my Grandma was 18 and my ‘Grandpa’ was 14.  He never looked like his ‘Dad’, and always thought that his Mum had an affair (for context, my Dad’s family is all Lebanese but he is very fair-skinned, which was partially why he assumed it had been an affair).  When his ‘Dad’s’ father, my great-Grandfather was on his deathbed due to cancer, a relative confessed to my Dad that his ‘Grandfather’ was actually his Father.  My dad had my Stepmum take a hair out of his real father’s head and had it sent for DNA testing which confirmed it was true.

So basically, my Grandma had an affair with a married man when she was 18, had one, possibly two children with him then married his son and had another four kids.  So my Dad’s siblings are both his siblings and his nieces/nephews, and the man who raised him is actually his brother.

Yeah I don’t talk to that side of the family anymore.”

“My Pa learned that he was conceived out of wedlock after having been told he was “premature” his whole life when my ma (then his fiance) met my grandfather for the first time. They were discussing something and my father says “I was premature.” Grandpa with the grace that seventy-year-old Slav does, shot back “Premature? Hell, You weighed eight pounds!”

I know my little sister is only a half sister and my Mum had an affair. This is because as a Medical Doctor, I know the blood group of my mum (A) and dad (AB) make hers (O) impossible. But I have never told her or anyone.

There were 50 Cats and 1 Dog in the Freezer

My great aunt was arrested for having 50 cats and 1 dog frozen in her freezer. They thought she was a crazy animal abuser and totally nuts. But she was just a crazy cat lady with 1 dog, and during the winter the animals all caught parvo. If you know anything about parvo it is extremely fatal, and extremely contagious. It killed all her animals. But since it was winter she couldn’t bury them. So she put them in her large freezer in the basement until spring. Of course they still put her in a home, but that was probably for the best.

The Trans Uncle and his Sinful Ways

“That I never met my oldest uncle on my Mom’s side because he was actually identifying as a woman pretty much full time. She was trans and my parents both didn’t know how to explain that and hoped I would never meet her until “He turns from his sinful ways”. She’s actually no weirder than any of my other Aunts and Uncles and pretty damned hilarious at times. I could not believe my folks kept that from me long into my early 20s and for that asshat backwards of a reason.” My Grandparents Wanted a Girl a Little Too Badly

“I saw a weird black and white picture tucked into a photo album once at my Grandparents’ house. I asked who the cute little girl was, and it turned out it was my Grandfather. His Mother had already had three boy, and really wanted a girl. He wore dresses and long hair until he was old enough to say “I want all these curls cut off!”

My Father Had Me When He was 12 Years Old

“My mother was adopted when she was a baby. I found out that her birth mother was 23 when she had her. Her father was 12.”

The Gun Went Off Accidentally….

His parents never forgave him and blamed him until the day they died. Apparently, he had some serious mental issues resulting from the accidental death and the way his parents treated him afterwards.”

That Uncle in Prison Story

“I had an Uncle in prison but no one in my family had ever told me what he was in for. He was never spoken about and if he was brought up in conversation everyone would avoid talking about him and change the topic quick stat. There was one night I was watching tv documentaries about horrific crimes in Perth. One of them was about David and Catherine Burnie and then there was another one about a call girl being stabbed to death, this guy had my last name. I remember thinking ‘well my last name isn’t that uncommon, must just be a coincidence he has my uncle first and last name’ The credits start rolling and my mum turns to me and says ‘so, did you put two and two together?” I have Vietnamese cousins out there somewhere….

“My Aunt Kate is a mentally disabled person (never diagnosed, family thinks she is a victim of the shaken baby syndrome). Turns out, in the 80s she would “party” with some Vietnamese immigrants and got pregnant…3 times. My family is Catholic, so abortion was not on the table for her, and the babies were put up for adoption immediately. My mom didn’t even know about the 3rd baby until a few years ago because she was pregnant with my sister (oldest sibling) and they didn’t want to take any attention away from her.

Really weird to think I have 3 cousins out there that I’ll never know/meet, and it’s really sad to think about aunt Kate’s life..”

My Mother Beat Her Until She Miscarried

“When I was 6, my sister was 16 and pregnant with twins.  Our Mother found out and beat her until she had a miscarriage. I think I saw it happen, I only remember flashes. My therapist says I will remember these sorts of things when I’m ready.  I don’t ever want to remember them.”

My Pro-Life Mum had her ‘Tumour’ Aborted

“In the 1990’s, my Mother, who always told people she was ‘Pro-life’, kept showing everyone that she had a mysterious tumour, a suspicious rounding in her lower abdomen.  She threw herself a benefit to raise money for the operation, all the while never actually going to a Doctor. She made some money, then a couple of weeks later, her tumour ‘just went away’.

Now such a thing wouldn’t be so scandalous except:

Via Throwaway8419 Via Thought Catalog My Great Grandmother was a Black Widow

“The rumour in my family is that my Great Grandmother was a ‘Black Widow’.  She had four husbands and all four of them died mysterious deaths. One of her husbands was stabbed to death by my Great Grandmother’s brother and the story was my GG was being attacked by him and her brother walked in on it and had to kill him in self-defence.  No charges were ever brought against either of them.  My Grandmother (GG’s daughter) stopped speaking to her when she was 18 (in 1950) and my GG died in 2014 (she was 96).

That’s a long time not to speak to your Mum, something serious must have happened. The rumour was that my Grandma knew for a fact that her Dad was killed by my GG and she got away with it, but my Grandmother refuses to talk about it, even after my GG’s death. I actually grew quite close to my GG the last 10 years of her life, and she as the sweetest, most cliche old Grandmother you could imagine 99% of the time. But every so often when something would make her angry, she would get this morbidly evil look on her face and it would make me think the rumours are true.”

My Cousin Accidentally Ate My Grandpa

“My cousin was a toddler and we were together as a family spreading my Grandfathers ashes across the family farm. When it got to her, she did what toddlers do and grabbed a handful and just started chomping it down. It was pretty funny to me (as an 8-year-old) but we aren’t allowed to tell her about it (she’s now 19 and I’m DYING to let her know!).”

Do you have a shocking family secret? Why not share it anonymously on our Secret Forum – Ask Stay at Home Mum 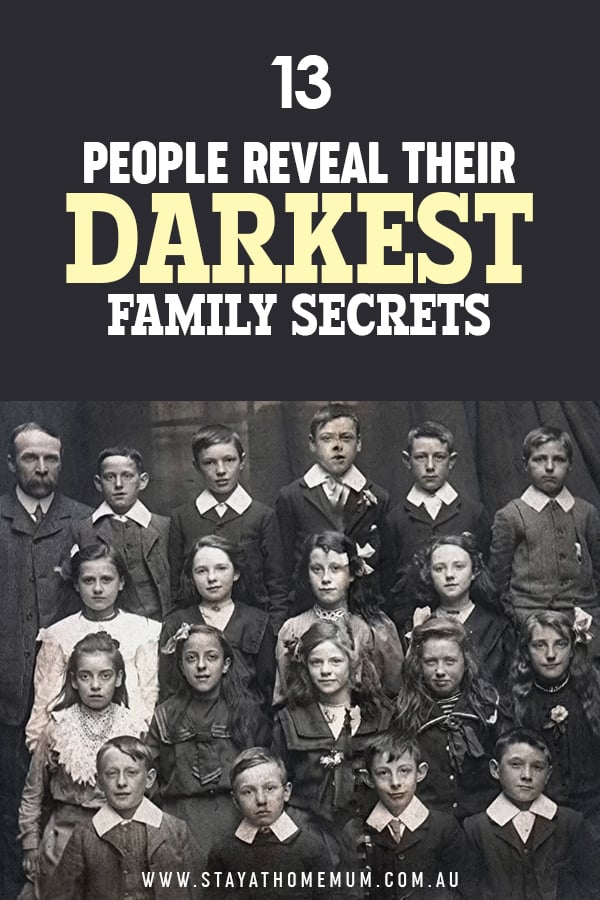 On November 13th, Baby Alexis Catherine Greene was found unconscious in her cot.