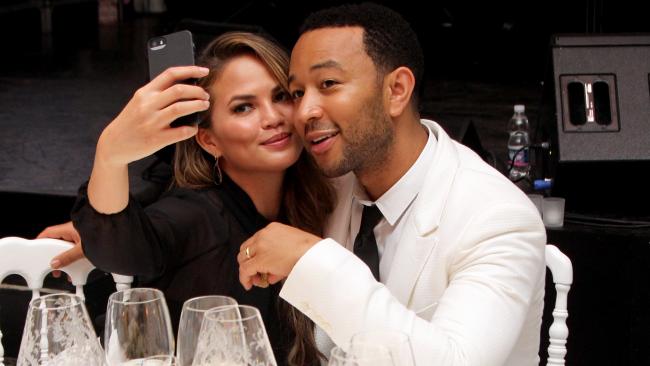 The internet is losing its shit over model Chrissy Teigen going on a date with her husband John Legend, leaving their two-week old daughter behind at home.

The internet is good at losing its shit, lets face it. But the latest Outrage Du Jour has me rolling my eyeballs so far back into my head that I could actually see myself thinking.

So if you haven’t heard, Chrissy Teigen gave birth to a teensy weensy adorable little daughter named Lulu Simone. Here they are on Chrissy’s Instagram. Isn’t she cute? Fast forward almost two weeks and Chrissy and John went out for dinner on Saturday night to a Los Angeles restaurant without their tiny baby. There was photographic evidence that the baby was NOT with them. And so the internet had to throw in its two cents worth. Because on the internet, everyone else is a perfect mother.

According to some of the screenshots that Chrissy posted to her Twitter account, there were a lot of haters telling her that she was leaving her baby way too early.

She was accused of selfishness and bad parenting. And others thought she was doing it because she’s an attention seeker who craved being in the media spotlight.

Chrissy took it all in her stride and tweeted “I went do dinner. People are pissed. Good morning!” She also mentioned the passive-aggressiveness from all the Judgey McJudgefaces of Twitter who are implying that if you love your child you couldn’t possibly be away from her for a single second (oh FFS): “”i never wanted to leave my daughter, i love her, BUT THAT’S JUST ME” – the passive aggressiveness is real!”

Oh no! WON’T SOMEBODY THINK OF THE CHILDREN!

Hey hysterical Helen Lovejoys of the internet, here’s something you might not have considered… maybe a new mum is able to step away for a break for a few hours and it’s perfectly acceptable because she’s a human being who just happens to have a newborn.

In this competition that some women seem to feel they need to have with each other on the internet to determine who is the best, most selfless, most giving, most motherly mother who ever mothered, they often forget the actual emotional toll their bullshit pressure can place on other people. Their ridiculous lofty expectations and standards they feel everyone else must adhere to are just that. Ridiculous.

Leaving your baby alone for a few hours with a sitter isn’t child abuse, people. If baby is breastfeeding you can pump and leave some food for her to take while you’re out. If it’s only for a few hours she might not even know you’re gone anyway, because you could be gone BETWEEN feeds, depending on how often she’s feeding and sleeping.

Getting out, getting some air, enjoying a meal out of the house if you can do it and you can afford babysitting is a God send some of us mere mortals who had babies without any family/friends around to help could only dream of in those first few weeks. So more power to her if she’s able to do it.

In fact, researchers have found there is evidence of reduced rates of postnatal depression among new mothers who are able to take time out for themselves while someone looks after the baby. Sounds like a no-brainer, really. Happy mum who gets some time to rejuvenate away from the 24-7 demand of new motherhood might have better mental health outcomes.

Women who never have personal time after having babies are three times more likely to experience depression than those who had personal time at least once a week.

I bet the Twitter warriors never even considered THAT for a second when they were hurtling all their venom Chrissy’s way.

Here’s a confession. I left a two-week old baby at home with my husband one time so I could go to a concert. I, too, am a monster who obviously had no love for her child because after giving birth my entire identity as a human being should have been erased and replaced.

It was 2006 and my favourite band ever, U2, postponed their Australian concerts from March until November that year, and I happened to have amazing tickets. Shortly after the March concert was postponed, I found out I was pregnant with my second daughter. When the new dates were revealed, it transpired I was going to have a newborn baby on my hands at the same time as the concert.

Notwithstanding that Kanye West was the support act (I don’t love Kanye, but that’s okay because Kanye loves Kanye more than enough to make up for it) I was going to be devastated to miss the gig – the band hadn’t toured since 1998.

“Just go. I can handle it,” my husband said.

“Are you sure? Because people on the internet will say I am a bad mother!” I would have said if it was 2016 and I was a celebrity with a Twitter account. But I wasn’t, so I didn’t.

And so I went, leaving some pumped milk behind. I had an enjoyable night, as much as possible two weeks post a c-section, and when I returned my baby hadn’t died of starvation, neglect or a broken heart that I’d gone out for the night.

Almost ten years later, of course my daughter has abandonment issues and is deeply psychologically scarred and is seeing a child psychologist three times a week. Just kidding… she’s fine.  She’s well-adjusted, is reading 1.5 years ahead of the expected level for her age, loves Taylor Swift more than is humanly possible, has a warped sense of humour, and likes sparkly blingy things. All normal stuff for her age, despite being abandoned by her cruel, heartless, selfish mother for a few hours as a two-week-old. She is 100% totally fine.

And Chrissy’s kid is probably going to be just fine too. 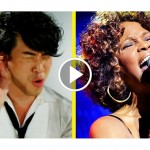 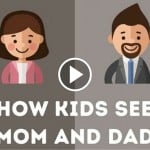 Women that have had sex with circumcised and uncircumcised penises, which feels better?
Answered 4 hours ago
Have I done the wrong thing?
Answered 6 hours ago
Help me get my 7yo out of my bed
Answered 21 hours ago
My husband is a womanizer I can spend a month with out having sex with him and I really need him what can I do.
Asked 1 day ago