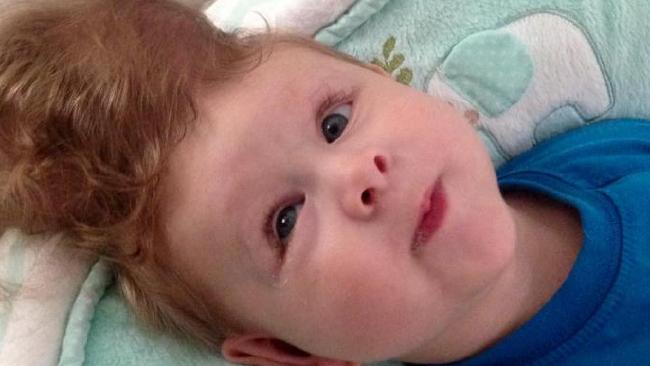 This is the amazing story of a baby boy born with his brain outside his skull who defied the odds and live past his birth.

Mum Sierra Yoder and husband, Dustin, from Sugarcreek in Ohio in the US, were over the moon knowing that they are pregnant with their second child. However, that feeling didn’t last long after doctors in Ohio told them at week 22, during their gender reveal ultrasound that the child, who they later found out was a boy, had an encephalocele “” also known as cranium bifidum “” a condition where parts of the brain protrude through openings in the skull creating sac-like growths. This means that the neural tubes hadn’t developed properly during foetal development, and parts of the baby’s brain were outside the skull. 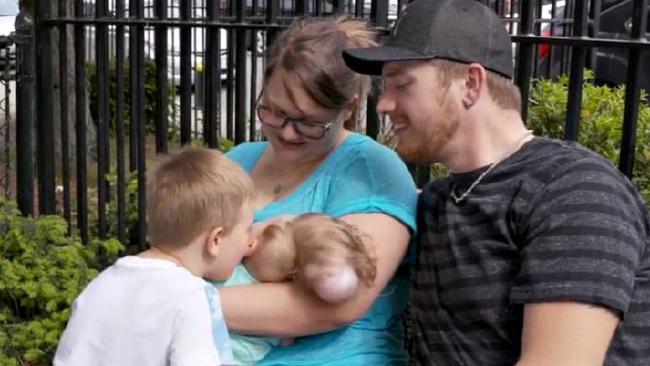 Ms Yoder told the Washington Post how heartbroken she and her husband were after the devastating news. “I started bawling immediately”¦ I didn’t think he would make it,” she said, adding that they were also told by doctors in Ohio that there was “no chance he was going to live. He won’t talk. He won’t move. He won’t know when he’s hungry. He’ll be a shell.”

Difficult as it was, the parents decided to spend more of Ms Yoder’s pregnancy planning for their baby’s funeral rather than his birth.

Doctors also advised them to have an abortion but Ms Yoder said she couldn’t simply terminate the pregnancy and decided to keep her baby boy to full term to meet him before saying goodbye.

Their little boy, they named Bentley Ross Yoder was born on October 31, 2015. Ms Yoder said they only prepared “one onesie “” light blue with stars “” and matching pants and warm, fuzzy socks” along with the feeling that they would be burying him in it soon after.

Suddenly, the unexpected happened. Little Bentley came out kicking and screaming. He was passed among family and friends for the first five hours, with everyone expecting the next hour to be his last. However, he didn’t stop breathing and 36 hours later, he was still going strong. Yet, doctors told the couple to take Bentley home and arrange hospice care.

With just a little amount of hope, the couple took Bentley home, but to their surprise, the baby continued to thrive despite some complications like a staph infection on his lungs.

Bentley continued to grow, moving normally and crying when he needed feeding. In fact, Ms Yoder said she could see nothing different between Bentley and her older son, Beau. “He was just a normal baby with ‘something on the top of his head’,” she said.

The next five months were spent trying to find a solution to Bentley’s condition. The first surgeon the couple saw claimed that the growth on Bentley’s head was “just damaged tissue” and “there’s no way it could be functioning”. However, the couple couldn’t believe it seeing how well their son moved and fed, so they decided to seek out a second opinion and ended up at Boston Children’s Hospital, a facility with a renowned Cleft and Craniofacial Centre. Here they met Dr John Meara, who told them there was a good chance Bentley was using the brain that was outside his skull, meaning it couldn’t simply ‘be removed’. Immediately, a surgical team was formed who used 3-D printed models to plan out and practice how they would instead expand Bentley’s cranium to fit the pouch of the brain.

On May 24, 2016, the surgery began. The five-hour procedure that went faster than expected required fluid to be drained from Bentley’s head, before surgeons could gently move the brain back inside the head. Leftover bone was then used to close the gap and reform the skull, and it was a success and Bentley was in recovery. Ms Yoder told the Post she was so overwhelmed. “He was awake; he was looking at us. He wasn’t cranky. He was just lying there, taking it all in,” she said. A month on from surgery, Bentley is now able to hold up his head and is ‘eating, smiling and jabbering’.

Now seven months old, Bentley’s future looks hopeful and doctors have told the parents that he will have a ‘rewarding life’ and plan to continue his progress one step at a time. The proud parents have now shared a series of photos on Facebook of their son post operation, which have been met with a stream of congratulations.

For now, the family and their loved ones simply take each day as it comes. Bentley has indeed defied the odds, which for the family, is enough reason to continue to hope for the best.

Mum Wins Fight For Down…