A happy ending stopped yesterday’s broadening search for a missing Queensland boy near Tin Can Bay when he arrived home safely at his back door last night.

Police confirmed the five-year-old turned up at his home about 6.15pm after wandering off with his two dogs in an area of bush behind his parent’s home at around 10.30 yesterday morning.

After the boy was reported missing, a massive search ensued, concentrating on the area of dense and swampy bushland surrounding the boy’s home. SES volunteers and officers on trail bikes and foot, along with the dog squad, combed the area, while helicopters conducted an aerial search throughout the area. Locals on horseback also joined the search in the difficult terrain which included some creeks and waterways. The chances of the boy’s survival overnight were at the forefront of everyone’s mind as daylight dwindled and weather conditions declined.

Not only is the area home to vicious mosquitoes and sandflies, but wild pigs frequent stretch of bushland.

The search would have continued into the night had the boy not relived the desperate worry of everyone involved when he showed up just on dark.

news of the day #trending Josef Fritzl Is The Monster… 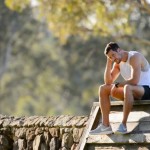 The Bachelor Put A Ring…