Wife
Answered 2 hours ago
Does anyone have lupus?
Asked 2 hours ago
Why are there so many gambling ads on tv lately??
Answered 3 hours ago
How much do you put away into savings per month (out of total household income)?
Answered 4 hours ago 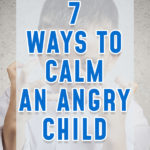 Kids aren’t as adept as adults at managing their emotions, and for some, this is much harder than others.

Often, kids need a little bit of adult help to calm down. Most parents have a pretty good idea of how to calm their kids down when they’re at home, in their own little ‘safe space’. But then, what happens when you aren’t at home? We have some tips that parents can use to help their kids to calm down anywhere, and in any situation.

One of the best ways to calm an angry child is to get them to take a few seconds to just stop and think before they react in a negative way. Young kids struggle with impulse control, but like any other skill, it can be taught. Having your child count to 5 or 10 is a great way to give them this time to think prior to action.

It doesn’t seem like much, but when kids put their hands in their pockets, they get a self-imposed physical restraint that also puts a comforting pressure on them. If kids tend to lash out when they’re angry, this is a great method to counter that. You could also have them hold their own hand tightly, or even sit on their hands, for a similar effect.

Bodies get tense when they’re angry and upset. As adults, we know how to release this tension, but kids often don’t and that can cause stress and make it much harder to calm down. One way for kids to visualise their tension and then deal with it is to make their hand into a tight fist, and then release it. Doing this a few times can really help.

We all know that deep breathing can have a really positive effect on a child’s anger levels, and is a wonderful relaxation technique. Teach your children to stand for a moment and take two or three very deep breaths. If they’re very angry and overwhelmed, get them to close their eyes, stand up straight, and take a few good breaths to calm themselves.

Sometimes, kids need a little bit more feedback from their deep breathing for it to have the full effect on them and their mood. One easy way to give them this feedback, and for them to really feel the power of their breaths, is to cover their mouth with their hands and blow into it. By blowing into their hands, kids can feel the air and the strength of their breaths, which can be very calming.

This method is a little more complicated, and probably works best with older kids. However, it’s great for when kids are really angry and tense, so if your child struggles with that, this skill is an important one to teach. Known as top-down relaxation, or the body scan, it encourages kids to start either at their head or their toes and systematically notice and relax areas of tension. Pair it with deep breathing and you have a calm kid in no time.

There’s something about hugs that just really calms people down, adults and children alike. If your child is angry and feeling overwhelmed by their emotions, tell them it’s okay to come to a parent, or even a sibling, and ask for a hug. Hugging can make you feel loved, cared for, and calm, which is why it’s sometimes the only thing you can do with an angry child.

Remember, there’s nothing wrong with anger! Kids shouldn’t be taught that anger needs to be pushed down and kept out of sight. Anger is absolutely a part of being human. However, kids should know how anger is appropriately dealt with, and that lashing out and being violent is never the right way to do it.

How do you calm an angry child?