What makes a movie scary?

Love them or hate them, they are a beloved genre of movies that are here to stay. And if you are looking for truly scary, then let’s take you on a journey to the scariest, most frightful and chilling movies — of all time (scary laugh!!!).

Paranormal investigators Ed and Lorraine Warren work to help a family terrorised by a dark presence in their farmhouse.

A single mother and her son are plagued by the violent death of her husband. Her son has a fear that there is a monster in the house… and there is!

A nurse, a policeman, a young married couple, a salesman, and other survivors of a worldwide plague that is producing aggressive, flesh-eating zombies, take refuge in a mega Midwestern shopping mall.

A reporter is drawn to a small West Virginia town to investigate a series of strange events, including psychic visions and the appearance of bizarre entities.

The lone survivor of an onslaught of flesh-possessing spirits holds up in a cabin with a group of strangers while the demons continue their attack.

After moving into a suburban home, a couple becomes increasingly disturbed by a nightly demonic presence.

Two adults and a juvenile burglar break into a house occupied by a brother and sister and their stolen children and can’t escape.

A family living on a farm finds mysterious crop circles in their fields which suggest something more frightening to come.

Mysterious deaths surround an American ambassador. Could the child that he is raising actually be the Antichrist? The Devil’s own son?

Perhaps the best zombie movie ever made. This movie keeps you on the end of your seat the whole time. They create the end of world apocalypse just perfectly.

A boy who communicates with spirits that don’t know they’re dead seeks the help of a disheartened child psychologist.

An unfaithful wife encounters the zombie of her dead lover; demons are pursuing him after he escaped their sadomasochistic underworld.

Behind a young family’s home in Maine is a terrible secret that holds the power of life after death. When tragedy strikes, the threat of that power soon becomes undeniable.

A group of camp counselors is stalked and murdered by an unknown assailant while trying to reopen a summer camp which, years before, was the site of a child’s drowning.

A man who specialises in debunking paranormal occurrences checks into the fabled room 1408 in the Dolphin Hotel. Soon after settling in, he confronts genuine terror.

A young woman is followed by an unknown supernatural force after getting involved in a sexual encounter.

Intent on seeing the Cahulawassee River before it’s turned into one huge lake, outdoor fanatic Lewis Medlock takes his friends on a river-rafting trip they’ll never forget into the dangerous American back-country.

Two men awaken in the secure lair of a killer who forces them to play a deadly game that will determine life or death.

A Phoenix secretary steals $40,000 from her employer’s client, goes on the run and checks into a remote motel run by a young man under the domination of his mother.

A young F.B.I. cadet must confide in an incarcerated and manipulative killer to receive his help on catching another serial killer who skins his victims.

A family heads to an isolated hotel for the winter where an evil and spiritual presence influences the father into violence, while his psychic son sees horrific forebodings from the past and of the future.

Five friends visiting their grandfather’s house in the country are hunted and terrorised by a chainsaw-wielding killer and his family of grave-robbing cannibals.

A family’s home is haunted by a host of ghosts.

When a teenage girl is possessed by a mysterious entity, her mother seeks the help of two priests to save her daughter.

Three film students vanish after traveling into a Maryland forest to film a documentary on the local Blair Witch legend, leaving only their footage behind.

A young couple move into a new apartment, only to be surrounded by peculiar neighbours and occurrences. When the wife becomes mysteriously pregnant, paranoia over the safety of her unborn child begins controlling her life.

A true crime writer finds a cache of 8mm home movies that suggest the murder he is currently researching is the work of a serial killer whose career dates back to the 1960s.

A woman who lives in a darkened old house with her two photosensitive children becomes convinced that her family home is haunted.

Mourning his dead child, a haunted Vietnam war veteran attempts to discover his past while suffering from a severe case of dissociation. To do so, he must decipher reality and life from his own dreams, delusion, and perception of death.

The wife of a university research scientist believes that her lakeside Vermont home is haunted by a ghost – or that she is losing her mind.

A mysterious and vengeful spirit marks and pursues anybody who dares enter the house in which it resides.

Paul Sheldon, a successful novelist, is rescued after a snow storm by his “Number One Fan” and must rewrite his latest novel to her liking in order to stay alive.

In 1960, seven outcast kids known as “The Loser Club” fight an evil demon who poses as a child-killing clown. Thirty years later, they are called back to fight the same clown again.

The commercial vessel Nostromo receives a distress call from an unexplored planet. After searching for survivors, the crew heads home only to realise that a deadly bioform has joined them.

An American nurse living and working in Tokyo is exposed to a mysterious supernatural curse, one that locks a person in a powerful rage before claiming their life and spreading to another victim.

As a widower tries to piece together his life in the wake of his wife’s suicide, his daughter finds solace — at first — in her imaginary friend.

After kidnapping and brutally assaulting two young women, a gang unknowingly finds refuge at a vacation home belonging to the parents of one of the victims: a mother and father who devise an increasingly gruesome series of revenge tactics.

A journalist must investigate a mysterious videotape which seems to cause the death of anyone in a week of viewing it.

When a gigantic great white shark begins to menace the small island community of Amity, a police chief, a marine scientist and grizzled fisherman set out to stop it.

Rex and Saskia, a young couple in love, are on vacation. They stop at a busy service station and Saskia is abducted. After three years and no sign of Saskia, Rex begins receiving letters from the abductor.

Stranded backpackers in remote Australia fall prey to a murderous bushman who offers to fix their car, then takes them captive.

A young, abused and timid 17-year-old girl discovers she has telekinesis, and gets pushed to the limit on the night of her school’s prom by a humiliating prank.

A young couple is trapped in a remote town where a dangerous religious cult of children believe everyone over the age of 18 must be killed.

Frightened of dogs? Not a good idea to watch this one. Based on the Stephen King book of the same name, it is about a family dog that contracts rabies and goes on a killing spree.

A psychopathic killer terrorises a babysitter, then returns seven years later to menace her again.

On Halloween night of 1963, six-year-old Michael Myers stabbed his sister to death. After sitting in a mental hospital for 15 years, Myers escapes and returns to Haddonfield to kill.

Several people are hunted by a cruel serial killer who kills his victims in their dreams. When the survivors are trying to find the reason for being chosen, the murderer won’t lose any chance to kill them as soon as they fall asleep.

A caving expedition goes horribly wrong, as the explorers become trapped and ultimately pursued by a strange breed of predators.

What’s the scariest horror movie of all time for you? 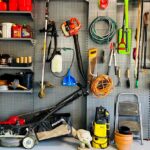 How To Organise Your Garage…

Have I done the wrong thing?
Answered 27 minutes ago
Chicken and Cauliflower Bake
Asked 3 hours ago
How many of you have tried swinging?
Answered 4 hours ago
9 Things You Did As A Kid You’d Never Let Your Kids Do
Asked 5 hours ago