Don't you want to Fight WOW Sludgefist with Up to 9% off cheap wow classic gold Quickly?
Asked 2 hours ago
What are some reasons you have lost a school mum friend????
Answered 4 hours ago
Unplanned third pregnancy and rocky marriage. Advice please.
Answered 7 hours ago
has anyone been caught straying ? Sorry same question as the first one vanished ?
Answered 8 hours ago

We put a lot of faith in health care professionals, particularly nurses who are considered by many to be the trusted extension of their doctors.

That’s why it’s always so distressing for us to hear about nurses who kill their patients, often dubbed Angels of Death.

Over the many years of human medical history there have been numerous cases of killing nurses, many of whom claim they are putting their patients out of their pain and misery. Studies undertaken on these nurses have found them to be motivated by either thrill, power, some outside gain, or a sense that they’re bettering the world by killing their victims.

One of the many challenges in identifying and trying these killers through the justice system is figuring out their victim count. As their victims are often very old, or quite sick, it can be hard for law enforcement to work out just how many lives they have taken. That’s why the estimated number of victims, and the number of deaths for which these nurses were charged for, often differ so greatly.

We’ve picked just seven of the many Angels of Death throughout history, to give you some insight into the twisted mind that drove them to kill.

A very recent Angel of Death, Kimberly Clark Saenz, also known as Kimberly Clark Fowler, was implicated in the deaths of several of her patients in 2008. At the time she was working at a Texas dialysis centre, she is thought to have injected her patients with bleach via their dialysis lines. When she was convicted, Saenz was a 34-year-old licensed practical nurse with substance abuse that was fed with her proximity to prescription medication. She was found to have killed at least five of her dialysis patients and injured at least five others.

She was convicted of first-degree murder and given three 20-year sentences with no eligibility of parole.

Bobbie Sue Terrell was a night nurse and Supervisor in a Nursing Home located in Pinellas County in Florida.  Bobbie killed 12 elderly patients in the nursing home she worked in via overdosing them on fatal doses of insulin.  She was given 65 years for her crimes and later died in prison in 2007.

Bobbie Terrell grew up in Illinois with seven siblings.  Four of those siblings, brothers, was diagnosed with Muscular Dystrophy, a genetic disease that causes progressive weakness and loss of muscle mass.  Two of her brothers would later die of the disease.  Bobbie Terrell was a religious fanatic and often played the organ in her local church.  She graduated high school in 1973 and went on to study nursing.

Terrell was married to Danny Dudley shortly after becoming accredited for nursing whereby she found out she was unable to have children.  She was also diagnosed with schizophrenia.  She and her new husband adopted a son, however, when the son was hospitalised for a drug overdose on Bobbie’s schizophrenia drugs, the marriage fell apart. Bobbie was devastated at the fact she couldn’t have her own child and committed herself to a mental husband where she stayed for a year.

Soon after her release and subsequent divorce, she started working in short-term nursing jobs.  However she was often admitted to hospital for various ailments such as a hysterectomy, broken arm, she fainted when working, fibroids and stomach tumours.  She also had a broken arm that did not heal over a period of time.   Bobbie later admitted to a counsellor that she stabbed herself in rage over her infertility including slashing her vagina with a pair of scissors.

Police eventually saw through her lies and she was sentenced to 65 years in prison. She died in 2007.

Beverley Allitt – The Angel of Death

Beverley Allitt didn’t have a very long reign of terror at the Grantham and Kesteven Hospital in Lincolnshire, England, but she caused more than enough damage. In just 59 days between February and April of 1991, Allitt murdered four children, attempted to murder three others, and caused grievous bodily harm to six children. Allitt, then working as a State Enrolled Nurse, killed her victims using both insulins and by injecting air bubbles, but police remained unsure of exactly how all of the attacks were carried out.

She was sentenced in May of 1993 to 13 life sentences, and the judge commented that she was such a danger that it was unlikely the would ever be released.

Allitt is thought to be suffering from Munchausen Syndrome by Proxy.

One of the most recent names on this list is Daniela Poggiali who made headlines in 2014 after being accused of killing 38 of her patients. Poggiali was an Italian nurse working at a hospital in Lugo, Italy. Her case is still in the courts, but Poggiali was present at the deaths of 93 patients, more than double that of any other nurse at the hospital. When she was apprehended in 2014 police also uncovered a series of sick selfies of Poggiali posing with her dead patients. It is thought that she drip-fed as many as 38 patients with potassium chloride, the compound used in lethal injections, and is personally responsible for their deaths. However, police are still looking into all of the deaths for which Poggiali was present during her time at the hospital.

Genene Ann Jones, born in July of 1950, was a paediatric nurse working in the state of Texas. During her killing career, which police believe ran from 1971 to 1984, she killed at least two babies with injections of digoxin, heparin and succinylcholine to induce medical crises. This may not seem like that many, but the estimated number of victims is actually thought to be over 60. At one of the hospitals she worked at, officials were suspicious of foul play as Jones had a statistically inordinate number of children under her care dying, but they didn’t charge her for fear of being sued. When Jones was finally caught in 1985 she was sentences to 99 years in prison, but she is scheduled for mandatory release in just a few years due to prison overcrowding.

Jane Toppan was one of the earliest Angels of Death on record having been active between 1895 and 1901. Toppan had a troubled childhood, having been surrendered by her father to a girl’s home following the death of her mother when she was just six years old. Raised in indentured servitude she started training as a nurse in 1885 and the killings began. Toppan used her patients as test subjects to explore the effect of different drugs on their systems. All up she confessed to 31 murders, but in 1902 she was found not guilty by reason of insanity and committed for life to the Taunton Insane Hospital in Massachusetts.

Charles Cullen doesn’t just hold the dubious honour of being an Angel of Death serial killer, he’s also suspected of being the most prolific serial killer in American history. He confessed to killing up to 40 patients during the 16 years that he worked as a nurse, but as investigators dug deeper into his life they began to suspect that number was much higher. Some experts have estimated that Cullen might ultimately be responsible for more than 300 deaths. Cullen was finally arrested in December of 2003 and charged, but the motive for his spate of killings remains cloudy and unknown. He was ultimately sentenced to 127 years in prison. 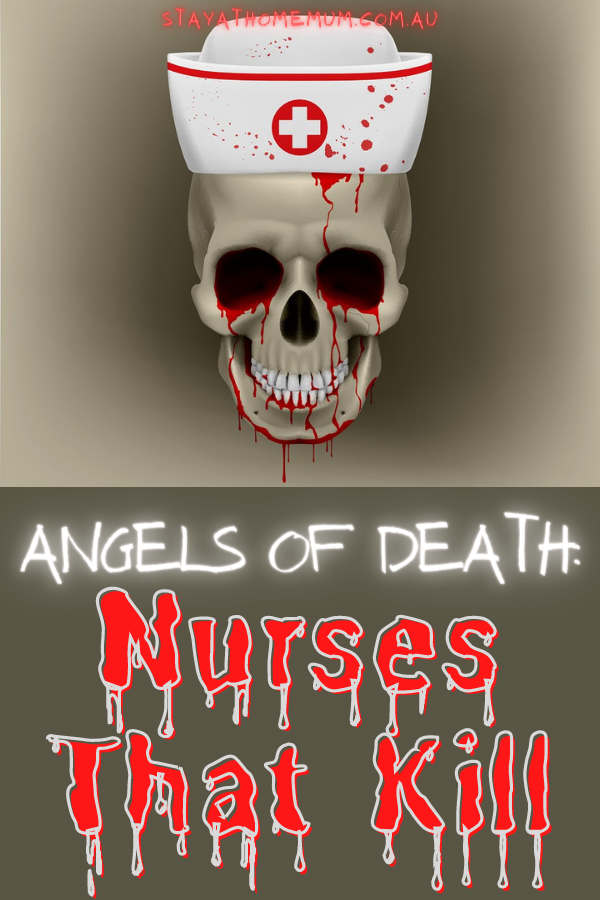 It's never too late to start!

This October, Support Hat Day To Lift The Lid on Mental Illness…

Don't put yourself and your health last!