A fourth case of measles in Australia has been confirmed.

The Department of Health has now issued a warning against measles exposure risks across metropolitan Melbourne and some parts of regional Victoria. Victoria’s Acting Chief Health Officer Dr Finn Romanes said that the four people infected with measles appear to have caught the infection locally, with three of them having been in Melbourne’s CBD between June 10 and June 13.

“It is likely there will be more cases related to this outbreak,” he said, adding that anyone who was not fully vaccinated with two jabs and the immunocompromised was at risk of infection.

Last week, a woman travelled interstate while infected with measles. She was said to be in Shepparton from June 21 to 25, travelled by train to Southern Cross Station on June 25 and wen to Melbourne Airport via Jetstar on June 25 before returning on the 28th. While in Brisbane, it was learned that she caught the Beenleigh train from the airport and visited the Beaudesert Fair Shopping Centre during her stay. Measles is considered rare in Victoria with their widespread vaccines, and 94 per cent of children in Victoria are fully immunised.

Measles is a highly infectious viral disease that can cause serious illness. It starts with a rash that usually appears three to five days after the first symptoms develop, and it can spread before symptoms show.

Children with both courses of the measles vaccine are extremely unlikely to contract the disease.

Dr Romanes says that people should be alert to symptoms like fever, sore throat, coughing and red eyes. 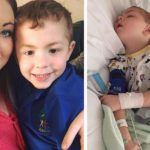 Boy Has “Poo Phobia” He…