A 46-year-old mum has given birth to her own grandson after her daughter was diagnosed with leukemia and was left unable to carry a baby to full term.

Alice Hohenhaus, 25, was just four years old when she was diagnosed with leukaemia. Despite going into remission at the age of eight, she relapsed when she was nine years old and full body radiation meant she would later have difficulty having children due to scar tissue.

However, to her surprise, she fell pregnant naturally when she was 23, but tragically lost her baby boy at 15 weeks. Doctors then told her that complications with her uterus meant she would never be able to carry a baby to full term. Because of this, Alice’s mother, Theresa Hohenhaus, from Ipswich, Queensland, decided to become a surrogate for her daughter and keep her dreams of having a family alive. “Alice already had the embryos and I thought ‘why not?’,” Theresa told the Daily Mail Australia.

Theresa, who is a mother-of-five and has fostered 50 children, thought she was too old and at first, she said that Alice don’t want her to do it, but she said she decided to go through it because she almost lost Alice when she hemorrhaged during her pregnancy. “Making her happy and seeing her happy now is worth it,” Theresa said.

Luckily, Theresa fell pregnant almost immediately. “It was amazing and every appointment and scan from then on we went to together and cried together… we are very very close,” she said. On June 2nd, Theresa gave birth to her own grandson, Parker. “I would have to say it was the best experience of my whole life,” Theresa said.

“It was so beautiful. I was worried about handing him over at first and Alice was worried about how she would cope seeing me in so much pain. But we both made it through and it is a moment I will honestly cherish until I die,” she added.

She said she had her grandson naturally and afterwards he was placed on her tummy while Alice cut the cord.

Theresa said she has been speaking with Alice about being a surrogate for her again. “I would absolutely do it again,” she said. 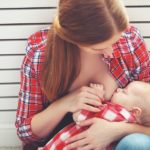 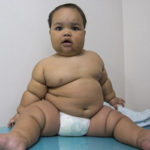 Overweight Toddler in India For…

Delicious Pizza Muffins
Asked 1 hour ago
What is Covid making you Boycott?
Answered 2 hours ago
Just buy Australian owned & made!
Answered 4 hours ago
Whats the naughtiest/kinkiest thing you've done while married or in a committed relationship?
Answered 18 hours ago