We have sourced the wackiest toilets dotted across the world, just for you!  To say the least, all of which can offer you a slightly different perspective when you, er, need to do your business.

1. The Loo With The View – The Shard, London

With a panoramic view of London from 800 feet in the air, it is no wonder thousands of tourists rush (or flush) to the The Shard. This toilet situated on the 68th floor was designed for guests to be able to admire the incredible surrounds of London while going about their daily…business!

Now, that’s a loo with a view!

2. Bigger… is it better? Chongqing, China.

With 1000 toilets, 32,290 square feet, and four stories, this bathroom is the largest in the world. There is every kind of loo you can think of here, from crocodile head to the Virgin Mary. But would you like to do your business in such an open space?

My guess is no!

Unfortunately though, for millions of people around their world their only option is to go to the toilet in public, with no access to working toilets or proper sanitation.

World leaders recently adopted the United Nation’s 17 Global Goals for Sustainable Development. Goal 6 will ensure access to good sanitation and hygiene for all, including an end to open defecation and a special focus on women and girls. As a global partner to UNICEF, Domestos supports goal 6 by helping to improve access to sanitation worldwide and thus stop the spread of disease-causing germs. Find out how you can help here. With no gravity to ensure that water stays in the toilet bowl or to force waste down, NASA had to build pumps and harness airflow to create an effective and hygienic bathroom for astronauts. The entire system relies on air creating a tight seal between the user and the toilet bowl, which is essential for obvious reasons. Foot straps and pivoting bars anchor the astronauts to the ground, and an intricate network of tubes, pipes and ducts handles the waste. Could you imagine doing your business while trying to hold yourself down? It’s too funny!

Far removed from water treatment plants, the Space Station must treat waste on its own and actually converts a large percentage into potable water. Now, if the International Space Station can do it, we can help other countries improve hygiene and sanitation too. 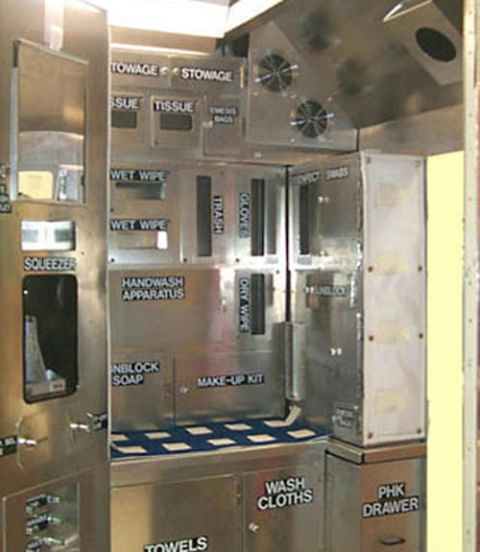 I’m not sure about you, but is it really appetising to eat from a toilet bowl? Well, in Taipei it is! This toilety-trend is so popular the whole country (including tourists) regularly dine here — and it’s not the only one either, apparently there are dozens of these toilet restaurants.
Don’t expect a fancy dinner here though, diners sit on toilet bowls to eat their meals, which are served in toilet shaped dishes and include mouth-watering delicacies such as ‘Mr Whippy’ shaped ice cream… mmmhhmmm. For some of us, the issue of finding a respectable toilet late at night can be an issue and for some, it often leads them down the path of “wayward widdling”. But never fear because engineers in Europe (those smart cookies) have come up with a solution. These ‘pee-pods’, called Urillifts, rise from the ground after dark, combating the unsanitary issue head on! They pop up at night, collect liquid waste before sinking back down in to the ground by sunrise. Smart, hey!

Indeed, it is true that different cultures have different preferences. It’s interesting how people view using the bathroom in various countries around the world.

Could you imagine not having access to proper working toilets or basic sanitation?

We take simple things like having a toilet in our home for granted; it is never considered a luxury. But for the 35% of the world’s population who do not have access to basic sanitation, a toilet is very much a luxury.

It’s shocking when you look at the statistics: 1/3 of the world’s population has no access to sanitation. A lack of access to toilets can cause the spread of diseases, because of this every two minutes a child dies from diarrhoeal diseases.

In an effort to improve sanitation and hygiene, Domestos has partnered with UNICEF to help 25 million people across the globe have access to a clean toilet by 2020.

UNICEF’s global sanitation programmes, supported by Domestos, aim to create sustainable approaches to improved sanitation. The programmes promote good hygiene practices to improve the health and well-being of communities, help create demand for access to toilets and raise awareness of the sanitation crisis.

If you are interesting in helping, you can look out for the specially marked Domestos bottles, where a percentage of money of every purchase goes to helping UNICEF carry out their global sanitation programmes. Or…. The lack of access to a toilet is no laughing matter. Spread the message, tell your friends, or buy a specially marked Domestos bottle and help change a life. Get involved – now is the time to make a difference!